Design-wise, the Thrive is a mixed bag. From the front, it looks pretty generic, save for a chrome webcam surround. The screen is obviously the dominant feature here, though the larger bezel leaves it with a larger footprint than the rest of the 10” tablets. Beyond that, the front of the tablet has the front facing camera, mic, light sensor, and notification LEDs for power, battery, and WiFi—pretty simple. 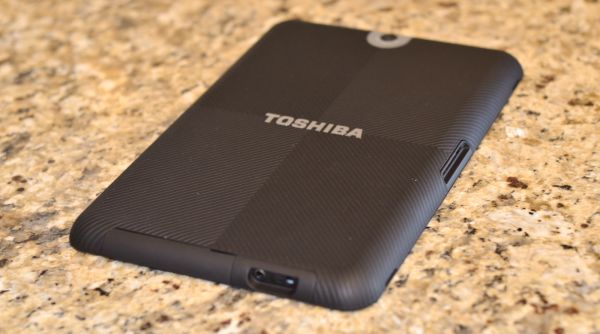 The back of the Thrive is more interesting; the battery cover takes up the entire rear portion, with a rubberized texture and chrome Toshiba badging. The curve of the sides and the texture make the Thrive feel pretty comfortable to hold, which is nice. The Thrive is a bit too wide to be ideal for one-handed use in landscape orientation, but for portrait and two-handed use, the design works well. The chrome webcam surround from the front wraps around to the back to house the rear facing camera as well.

It’s the single worst thing about the Thrive’s design—a distinctly cheap industrial design element on an otherwise clean, if somewhat generic, device. I’m not sure who at Toshiba decided this was a good idea, but evidently they liked it enough to push it to the 7” Thrive as well.  The chrome plastic doesn’t help—if it was matte black plastic, or even a less-bright metal, I think I’d be a fan, just for adding an element of visual interest. But in chrome? It just looks kitschy. 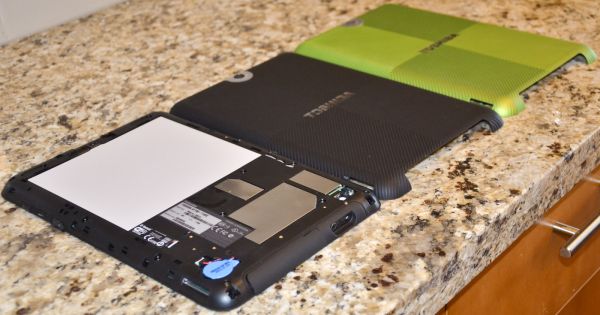 The lid otherwise is pretty cool. It’s one of the few recent tablets with a removable battery, which is always nice. Toshiba offers a number of replacement lids in different colors—I got a bright green one from them; other options include silver, dark blue, lavender, and a magenta-type color that Toshiba calls Raspberry Fusion. It adds a nice touch of color to the otherwise completely black device, and the cost is surprisingly reasonable (I’ve seen them go on sale for $5-7 pretty regularly).

The best part of the design is the port selection. There are real, life-sized ports on board here—a USB port for connecting input devices and mass storage, a full-sized HDMI port (no smaller connectors or anything here, hooray!), a full-sized SD card slot, a mini-USB port to connect the tablet to a computer, and the standard headphone/mic combo jack.

All of these ports are hidden by a cover that basically is just a thin plastic contour that is attached to the tablet by a strip of flexible plastic that's begging to be fatigued into failure or simply torn off with an errant gesture. It holds itself to the tablet using small plastic clips, and has the unique distinction of being at once poorly built, annoying to use, and basically devoid of any functionality. If this were my personal unit, I would tear the cover off, it doesn't serve much purpose other than keeping dust out of the ports. That usually doesn't present itself as a problem on other mobile devices with exposed connectors, so I just don’t see the point.

Toshiba definitely made some missteps with the design and build here, but they show that they are learning. Their next tablet, the Excite, measures at exactly 7.7mm thick and 558g (basically one-upping the Galaxy Tab 10.1 and Transformer Prime), has none of the odd design elements that the Thrive does, and generally seems to bring Toshiba into the high-end of the Android tablet market. We’ll see about pricing and availability, but $499 and February wouldn’t be a bad bet. Either way, the Thrive isn’t nearly competitive with the Galaxy Tabs and iPads of the world from a device hardware standpoint. We expected that going in given the price delta, but it’s still worth noting that you do get what you pay for from a design standpoint.