As we stated at the start of this article, NVIDIA is not directly sampling GTX 550 Ti reference cards for this launch. Instead they have left it up to partners to do the sampling. Zotac in turn has provided us with their factory overclocked model, the GeForce GTX 550 Ti AMP, a custom design clocked at 1000MHz core and 1100MHz (4400MHz data rate) memory. We’ll be looking at performance at both stock GTX 550 and Zotac factory clocks. 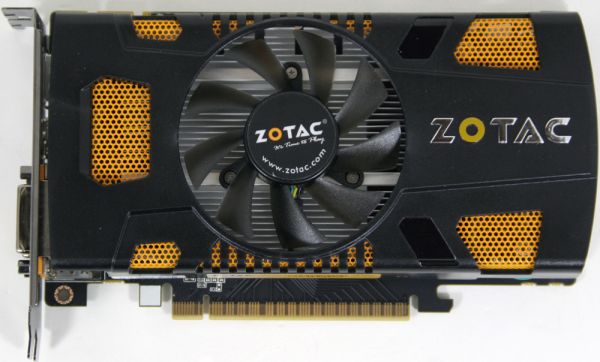 The AMP is very similar in design to Zotac’s previous GTS 450 AMP card, which is not surprising given the near-perfect compatibility of the GTS 450 and GTX 550 designs. Zotac does not provide thermal/power data for their cards, but with the factory overclock we’d expect it to be a bit more than the 116W for the reference design.

At a hair under 7.5” and using a double-wide cooler design, the AMP is nearly ¾ of an inch shorter than the original GTS 450, reflecting the fact that NVIDIA’s partners often end up producing shorter cards. A simple shroud covers the card, which directs most of the airflow from the 74mm fan out the front and the rear of the card. If we remove the shroud we find a rectangular aluminum heatsink covering the GPU – the GDDR5 memory remains uncovered. 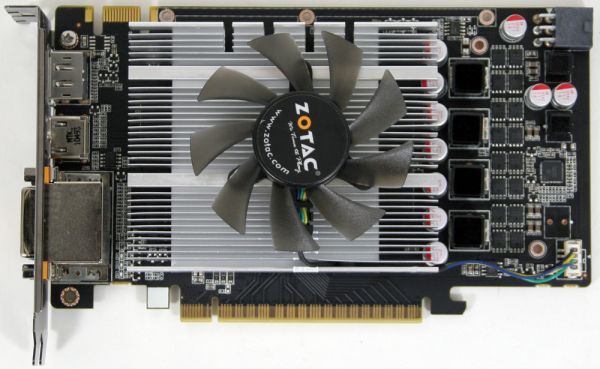 Power is supplied by a single rear-facing 6pin PCIe power socket, which provides more than enough power for a lower-power device such as the AMP. Zotac has outfitted the chip with Hynix GDDR5; 4 1Gb chips and 2 2Gb chips. All of them are rated for 5GHz operation, so even at 4.4GHz the AMP is running its memory below what the chips are capable of, not counting what the bus and GPU itself are capable of handling. Meanwhile as was the case with the GTS 450, a single SLI connector is provided for 2-way SLI.

A common theme with customized Zotac designs is support for additional display connectivity options beyond the NVIDIA reference design, and Zotac does not disappoint here. By shifting a DVI port to the 2nd slot, Zotac has outfitted the card with a full size DisplayPort, along with upgrading the HDMI port from mini to full size; they are still limited in terms of total displays by the GPU however, and even with 4 ports can only drive 2 displays at once. Zotac continues to be one of the only NVIDIA vendors we regularly see support DisplayPort, a sharp contrast from AMD & their partners who include it on virtually everything.

Rounding out the package is the usual collection of extras from Zotac. For hardware this means a molex-to-PCIe power adapter and a DVI-to-VGA adapter. Meanwhile on the software size Zotac continues to provide the Boost Premium package, which includes a collection of OEM & trial copies of various GPU-accelerated programs, including vReveal, Nero Vision, Cooliris, XBMC, and  Kylo.

Zotac is pricing the card at $155, $5 more than the NVIDIA MSRP for a basic card. With it comes a 2 year warranty, and a 3rd year is added upon registration. 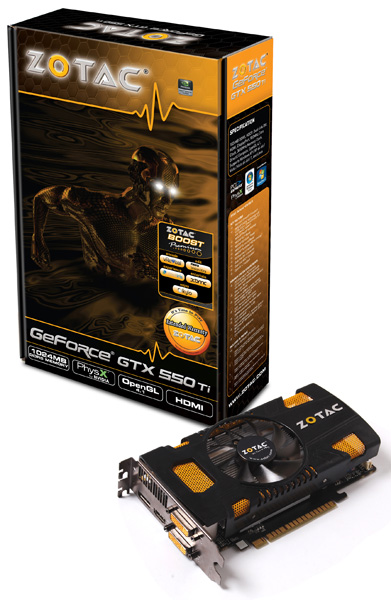