The Dropcam Echo review unit came in a spartan package. The camera itself was bubble wrapped. There were some mounting aids, a power adapter and an Ethernet cable. Similar to boxed software, the unit was accompanied by a card introducing the Dropcam Echo. The card also had a product key. 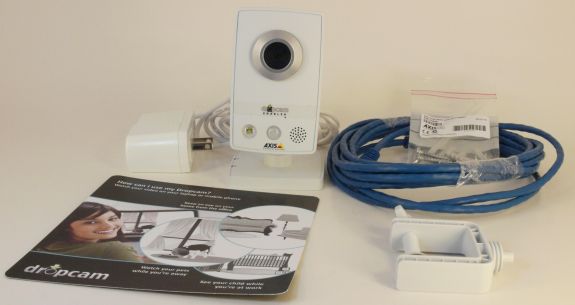 I wanted to setup the unit as a non-technical consumer, and decided to follow the directions blindly. Even though my router had a wireless MAC filter, I refrained from adding the Dopcam Echo's wireless MAC ID to the list.

The first direction was to connect the camera to the router using the supplied Ethernet cable. The introduction card directed me to visit www.dropcam.com/start as the next step. The key on the card was entered, and after this, the directions on the website were followed.

I was able to start watching the video from the camera on the site soon after entering the key, but the wireless was still left to be configured. Wireless setup was a must as the Dropcam had to be shifted to a different location, away from the router. The setup page presented me with a list of wireless networks within the reach of the camera, and upon selection of my network, prompted me to enter the network password. For a technical person like me, it was unnerving to find these details displayed and requested on a remote non-secure page, but this is the price one has to pay for a solution that is plug and play. After feedback, Dropcam has now moved these pages to a secure server.

After typing in the network password, the page directed me to lookup the status of the wireless connection by observing the nature of the glow around the lens. A full green would have implied that the wireless connection was successful, but I observed blinking red and green in sequence. Upon clicking the appropriate icon in the page, I was informed that the network password entered could have been incorrect. Failing this, I was supposed to contact Dropcam support. Fortunately, I had requested them to let me know where to find the MAC ID earlier. It turned out to be the SN at the back of the unit. With this MAC ID entered in the wireless filter, I entered the password again, and was presented with a successful wireless connection for the camera. After feedback, Dropcam has added a note about wireless MAC filters to the appropriate page.

All said, I was up and running, with the Dropcam far away from the router (still within the wireless reach) within 10 minutes. I have to say that this is probably the shortest time I have ever spent in setting up any sort of networking gadget.