All evidence now points to an almost certain announcement of the Sony A900 around September 10. Sony has scheduled worldwide events for professional photographers around that date. There have also been leaks of two new ads for the A900 - one from National Geographic in English and a Danish photo magazine ad. 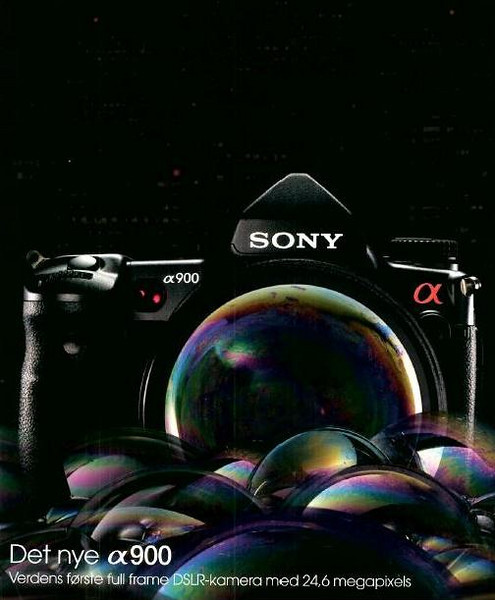 The Danish ad appears legitimate in that it continues the Sony "bubbles" theme that they've used in several other ads this year. The rest of the ad also expands convincingly and provides more details of the A900: 24.6MP Full Frame Exmor CMOS Sensor; Dual Bionz Image Processing Engine; Intelligent Preview; 100% Viewfinder 0.74 mag; 3.0" 921,000 dot hybrid LCD; 9 point dual cross AF (with f2.8 sensor and wide area 10 point assist); 5 FPS; Steady shot. (For those interested, the Danish text at the bottom translates as, "The new A900. The world's first 24.6MP full-frame DSLR camera.")
The description of 9-point dual cross AF with wide area 10-point assist is somewhat confusing. If we were forced to guess, we would speculate the new AF system has 19 points with 9 dual-cross points - the center one being double-cross like the current A700 for f/2.8 or faster lenses - plus 10 outlying single segment AF points. This is certainly an important specification for Sony ads to leave in doubt with such imprecise wording in the ad. 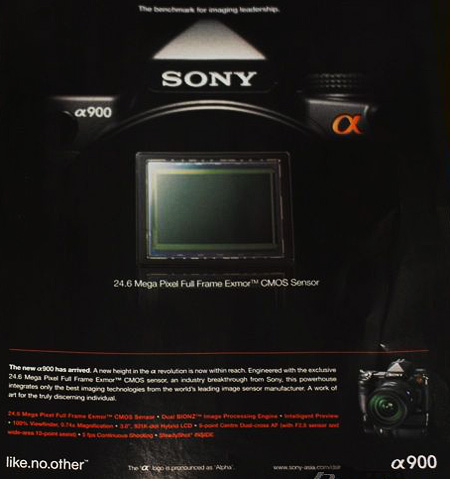 An even more interesting ad has appeared in Asian forums, which claims to be an ad that will appear in the next National Geographic. Several sources have reported this ad and shown captures of the magazine as well as the ad. The text reads as follows:

The new a900 has arrived. A new height in the "α" revolution is now within reach. Engineered with the exclusive 24.6 Mega Pixel Full Frame Exmor CMOS sensor, an industry breakthrough from Sony, this powerhouse integrates only the best imaging technologies from the world's leading image sensor manufacturer. A work of art for the truly discerning individual. 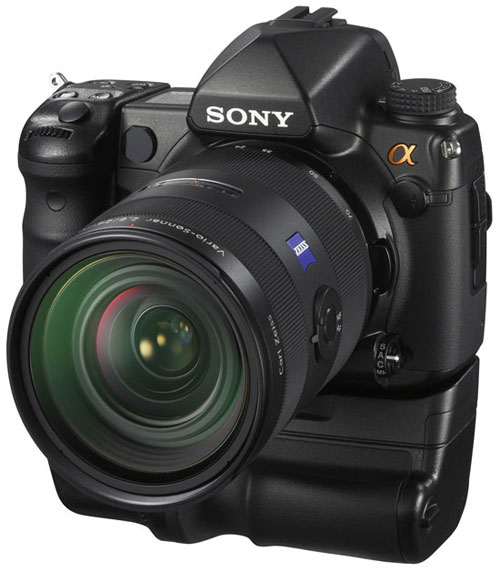 Recent leaked A900 ads, images, and specifications hint that the current A700 battery grip may also fit the A900. Photos also seem to support the rumor that the A900 will not have a built-in flash, which would certainly fit many buyers' opinion that a pop-up flash does not belong on a Pro camera. We thought that argument might be dead when the Nikon D700 featured a pop-up flash that also serves as a wireless flash controller. The Sony system also supports wireless flash and a pop-up could be useful.
The other intriguing specifications are the very pro-grade 100% viewfinder and a sort-of Live View system Sony calls "intelligent Preview". This is apparently some sort of fast depth-of-field and focus check on the LCD screen that is fast enough to be useful on a professional camera - unlike the Live View flavors that have appeared so far. Exactly what it is and how it works will have to wait for the Sony official announcement and the hands-on testing.
An unanswered question for many is how sensitive this 24.6MP sensor can be compared to sensors like the one used in the Nikon D3 and D700, which have a standard range to ISO 6400 and an extended range to ISO 25600. Some quick math shows that a full-frame sensor with the same pixel size and spacing as the 12.3MP Sony A700 and Nikon D300 sensor could be around 28MP. That means the Sony should be more sensitive than the highest ISO 6400 seen in the A700, but probably not at the 25600 of the D3/D700 that is half the resolution of the A900 - all else being the same. Our guess would be perhaps a stop faster at 12800 if we were forced to speculate.
The biggest remaining question for the Sony A900 is the price. Rumors have suggested anything from $1500 to $4000. The best info on price we have yet seen is a French ad listing a price of €2499. The same ad shows the current A700 at €1199, which is very close to the US dollar price. That is often the case with photo equipment, which is generally much more expensive in Europe than in the US. Based on that it would seem reasonable that the A900 will sell somewhere between $2500 and $3000 in the US.
The rumored September 10 launch date certainly fits with the professional photographer special events that Sony has scheduled in many cities around the world for September 9, 10, and 11. The invitations we have seen have not specifically mentioned the new full-frame Sony DSLR, but you don't invite professionals to see a Sony presentation on a new point-and-shoot. Leaks suggest a ship date of September 30.
Index Canon 5D Replacement
Tweet
PRINT THIS ARTICLE
POST A COMMENT