When the Olympus E-3 was featured last December, the 11-point dual cross (44 point) sensor stood out from the crowd - in speed and accuracy. As pointed out in that article, Olympus needed to move as much of the E-3 technology as possible to their regular DSLR line as fast as possible. When Olympus announced the E-520 just a couple of months ago it appeared Olympus might have done just that.

It does appear the new E-520 brings over a substantial amount of E-3 technology, but it does borrow form other top four-thirds cameras as well. It even brings over contrast detect focusing with 11 points from Panasonic/Leica. However, the 3-point autofocus that appears so dated is continued in the E-520. Where other DSLR manufacturers are now featuring fast 9-point AF modules, Olympus and Nikon still relegate 3-point AF to their entry models. This is somewhat surprising since nothing else about the E-520 is entry-level except the price. 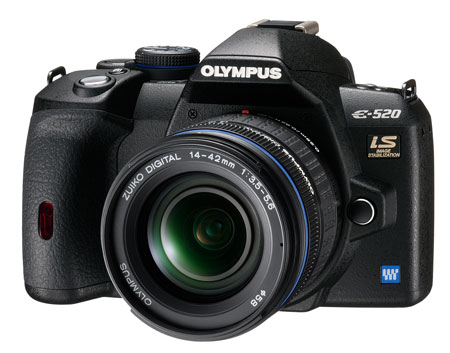 The Olympus E-520 is an upgrade to the E-510, which has been the biggest seller for Olympus in the consumer DSLR space. The new model adds processing improvements, more effective in-body IS (Image Stabilization) that works with any lens, and what Olympus describes as on-LCD Autofocus combined with Face Detection. These are the same updates that recently made their way to the tiny E-420, while keeping and improving the "IS with any lens" that was a standout feature of the E-510.

Olympus describes the improved Live View technology as "advanced autofocus Live View enables photographers to compose their images and bring them into sharp focus on the HyperCrystal II LCD - just like a point-and-shoot camera." While Olympus did not provide much detail, it is now clear the new Live View on the E-420 and now the E-520 adds Contrast Detection AF to the Phase-Detection AF used in the last generation E-410 and E-510. This is the same technology used by Panasonic in their swing-tilt-swivel screen Lumix L10.

Since Olympus pioneered Live View, which is now appearing on almost every new DSLR, it should come as no surprise that Olympus has enhanced Live View on the latest models to better compete in this fiercely competitive market. However, for now the new Contrast Detect Live View and face detect only works with a few Olympus and Panasonic/Leica lenses. Considering the fact Olympus added the Contrast Detect AF with just a Firmware flash to the lenses, it certainly appears Contrast Detect AF and Face Detection capabilities could be added to other lenses in the future with a firmware upgrade.