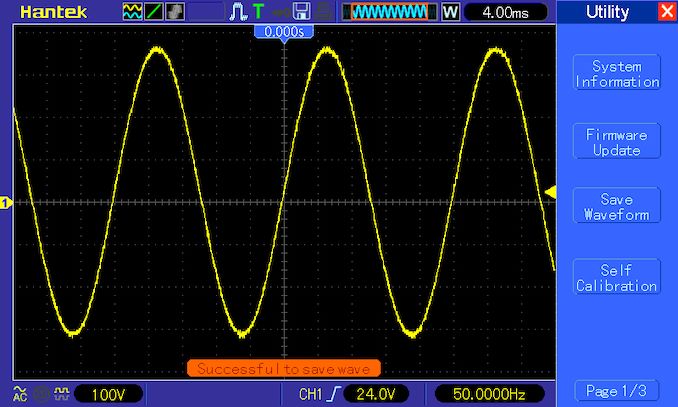 The fan outputs 42.3 dB(A) while it is running at maximum speed. Vertiv has programmed a load-based control of the fan’s speed into the Edge Lithium-Ion, meaning that the fan will reduce its speed according to the load while the unit is running on batteries. This initially seemed like a nice approach, but the fan will always run at maximum speed while the unit is recharging its batteries. Therefore, if the unit operates at just 25% load and there is a ten-minute outage, the fan will be nearly silent for ten minutes during the outage and then will be running at maximum speed for nearly two hours, practically negating the benefits of having a fan speed controller in the first place.

The battery runtime of the Vertiv Edge Lithium-Ion 1500 VA is better, but close, to what's advertised. These figures are achieved with its batteries fully charged and while they are new. Vertiv claims that the batteries can last up to ten times longer than typical valve regulated lead–acid (VRLA) batteries but that is not something we can verify within the timeframe of a review. The company does offer a five-year warranty on the batteries though, which is by far the best we have ever seen to this date. The recharging speed of the Lithium-Ion battery is also leagues ahead of any Lead-based battery, with the Edge Lithium-Ion 1500 VA UPS recharging its battery at least three times faster than an equivalent product with a sealed Lead-acid battery. 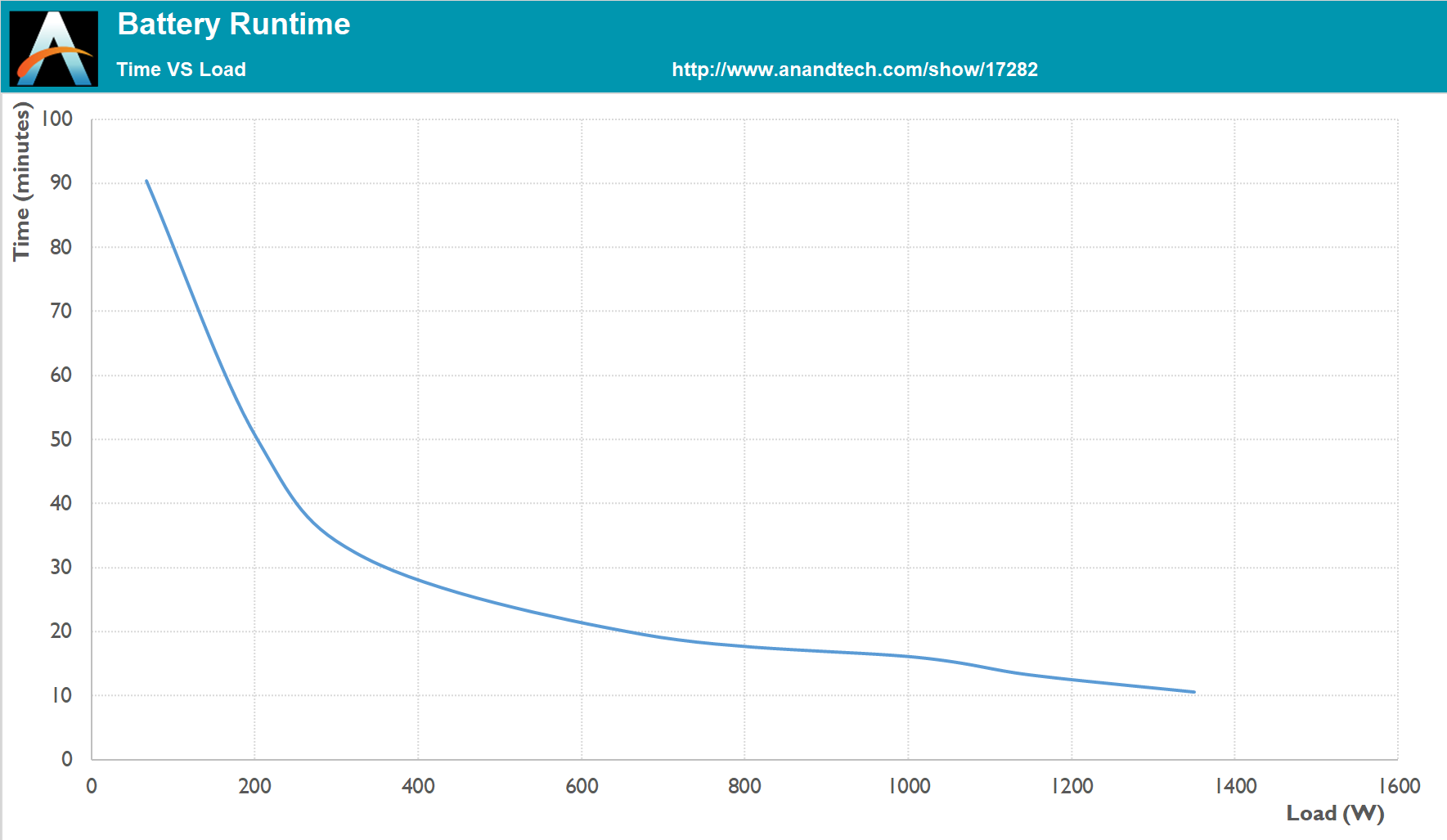 The output of the Vertiv Edge Lithium-Ion 1500 VA impresses as well, delivering a nearly perfect sinewave. Of course, it is not a true sinewave – a true sinewave is not physically possible without an ideal rotating machine – but it is a very close approximation of it. If we take a very close look at the waveform, we will see a very fine stepped wave. 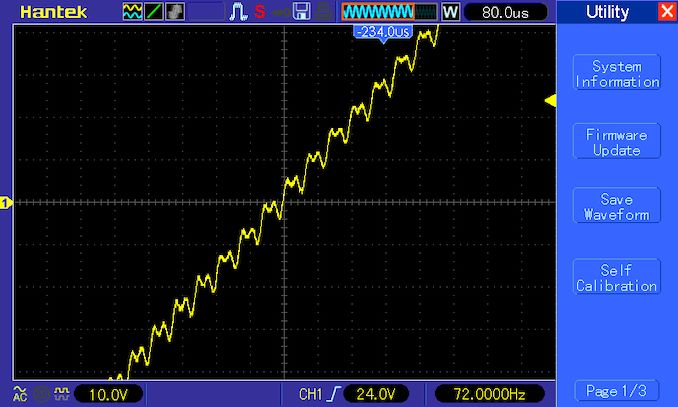 What is very impressive about it is that the output is virtually unaffected by the load – there is only a tiny waveform deformation between zero and maximum load, barely discernable on the oscilloscope and practically negligible. 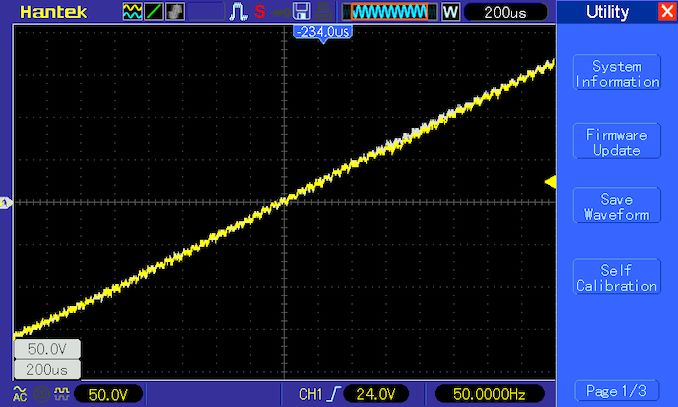 The Vertiv Edge Lithium-Ion 1500 VA UPS also is exceptionally stable when the load suddenly shifts. The capture below reveals the worst output waveform deformation that we managed to cause while the unit was running on batteries and we had to immediately switch the load from zero to 100% in order to realize it - a completely unlikely real-world scenario. 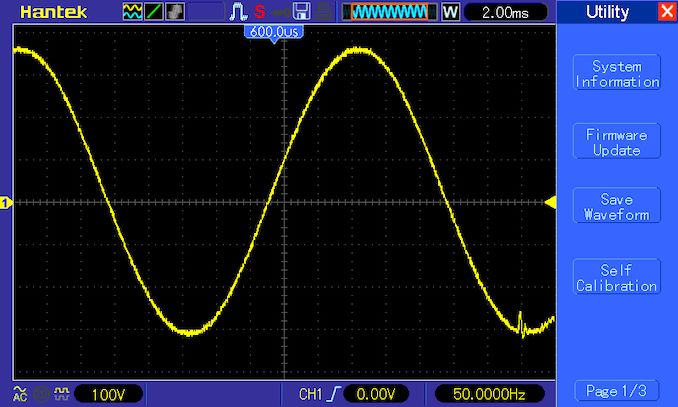 Vertiv typically designs products for IT infrastructure and industrial sites. With the Edge Lithium-Ion 1500 VA UPS, Vertiv is trying to make a move towards the high-end retail market with a product that was initially designed for critical IT infrastructure, particularly for sites where frequent maintenance may difficult. Due to its intended design, we expected that its electrical performance would outclass more retail-grade products, and the Edge Lithium-Ion 1500 VA UPS did not let us down.

As far as consumer/household use is concerned, the UPS also fares very well there since it's dead-quiet while fully charged and running on AC power. The flip side to that, however, is that the fan can be loud when the UPS needs to charge its batteries. Although Vertiv’s engineers tried to implement a fan speed controller, the application was not brilliant, as the fan still operates at maximum speed most of the time. The saving grace here is the short battery charging time, meaning that the fan will not stay at maximum speed for several hours, as is the case with the vast majority of retail lead-acid UPS designs.

The highlight of this particular UPS obviously is the lithium-Ion battery. A VRLA battery of equal capacity would be almost twice as large and heavy, and as you might expect, Vertiv seems to be bringing that up a lot in their marketing brochures. But these are admittedly not significant advantages for stationary installations.

Rather, the two truly important advantages of using a lithium-Ion battery are its lifetime and charging current. The lithium-Ion battery will live for much longer than a typical VRLA battery and may even outlive the service life of the UPS itself, which is why Vertiv is so comfortable with offering a five-year warranty on the battery. It can also be charged much faster than VRLA batteries, with the Edge Lithium-Ion 1500 VA charging its battery from 10% to full in a little over two hours. This is very important in areas where the electricity supply is unreliable and the UPS needs to keep critical infrastructure, like a security system, communications equipment, or even a medical system, always running. If the load of the UPS is low, the Edge Lithium-Ion 1500 VA can keep equipment running even if the electrical grid is available for less than half of the day. 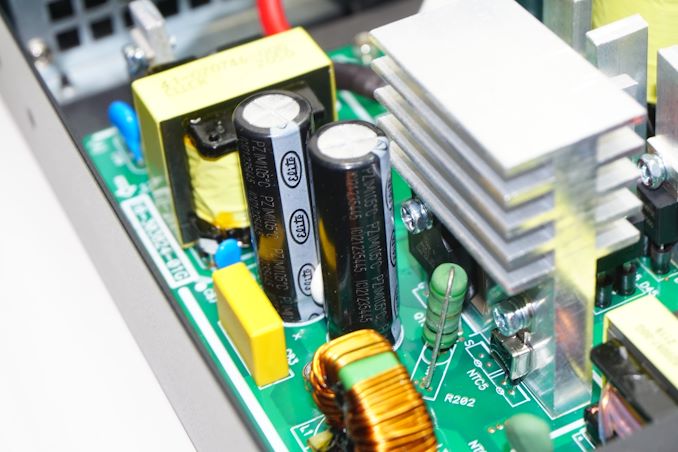 For the retail consumer, the advantages of owning a UPS like the Vertiv Edge Lithium-Ion 1500 VA are obvious. As the UPS was initially designed to protect critical infrastructure, it goes without saying that its electrical performance is outstanding, with exceptional transfer times and amazing output power quality. The lithium-Ion battery also offers rapid charging-discharging times and has a significantly greater lifetime than typical VRLA batteries. Undoubtedly, the Vertiv Edge Lithium-Ion 1500 VA is an excellent UPS by current standards, with fantastic overall performance and a lengthy warranty. 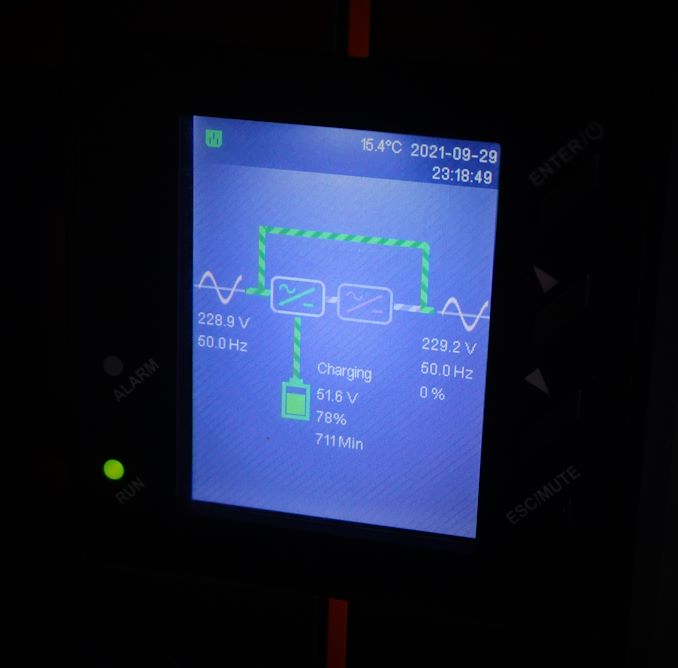 However, Vertiv is not a company with a strong retail presence, and as a result they seem to have difficulties truly bringing their products down to the high-end consumer market and making them available from more consumer-focused retailers. As such, not only is the retail price of the Edge Lithium-Ion 1500 VA unit well above $1.000 at the time of this review, but its retail availability is also limited, impairing the market potential of the unit. So while it's a fantastic UPS overall, given the high price tag, the only users we can really envision buying an Edge Lithium-Ion unit to begin with are those who need to protect very expensive equipment and/or have to deal with a very low-quality electrical grid. And, for better or worse, there are a number of other top-performance UPSes that are readily available from retailers even when the Edge is not.

Introduction, Examining Inside & Out
Tweet
PRINT THIS ARTICLE
Comments Locked