The ASUS Vivobook Pro 15 OLED Review: For The Creator In All Of Us

The ASUS Vivobook Pro 15 is not a dedicated gaming system, but ASUS does fit it with a reasonably powerful graphics card in the NVIDIA RTX 3050L. Many content creation applications are able to leverage the graphics processor to accelerate workloads so providing a more powerful GPU than is integrated with the processor makes a lot of sense. NVIDIA has also been working hard with the software developers of these applications to make use of the RT cores for further performance improvements. 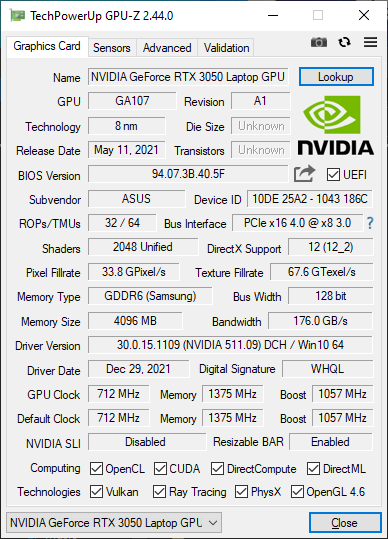 ASUS runs the RTX 3050L with Max-Q at a normal 35-Watt TDP configuration, although there is a 50-Watt dynamic boost available. The graphics card features 4 GB of GDDR6 with a 128-bit memory bus to feed the 2048 CUDA cores. Performance-wise it is the lowest-tier RTX card available for laptops, but still offers a significant uplift over integrated graphics.

ASUS also ships the Vivobook Pro 15 with NVIDIA’s Studio driver suite which is more focused on performance with creative applications and system stability than the game-ready driver setup.

To see how the ASUS Vivobook performs we ran it through our laptop gaming test suite. Although this device is more focused on other tasks, the GPU performance in games which are the most demanding test for a GPU will still give a good look at how the system is able to perform. We have added some new games to the suite and because devices are sent back to the manufacturer after they are reviewed, only some of the latest laptops have results for those games. Please be patient as the results are added to over time.

As usual, we will start with some synthetics, then move on to gaming performance.

For 3DMark we have started moving to using the newer Time Spy test which utilizes DirectX 12 APIs over the older Fire Strike, and as such, have limited results available. The RTX 3050 in the Vivobook Pro 15 fits in where expected, behind the more powerful RTX 3050 Ti in the Surface Laptop Studio, but well ahead of the integrated graphics of the other systems.

GFXBench version 5.0 added new DirectX 12 versions of the Aztec Ruins test. This benchmark is well-suited to lower-power devices like smart phones and integrated CPU graphics, so anything with a discrete GPU does very well.

Tomb Raider is an older game but can still be demanding on devices with low-power GPUs or integrated graphics. Thankfully the Vivobook Pro’s RTX 3050 can easily handle the first game in the rebooted Tomb Raider franchise.

Rise of the Tomb Raider

The second game in the rebooted series added a lot more graphical fidelity, as well as DirectX 12 support. The RTX 3050 still does well in both our value and enthusiast settings.

Shadow of the Tomb Raider

The most recent game in the franchise is by far the most demanding graphically. Here the Vivobook Pro 15 pulls ahead of the Surface Laptop Studio’s RTX 3050 Ti thanks to the more powerful Ryzen 7 5800H processor.

As one of our titles that is targeted towards integrated graphics, the Vivobook does very well in Strange Brigade at 1920x1080. It is just behind the Surface devices which have more powerful GPUs, but the gap is not very large thanks to the increased CPU performance on tap with the Vivobook.

The RTX 3050 has no issues with Shadow of War at lower resolutions, but with everything set at max at 1920x1080 it is not able to provide enough performance for smooth gameplay.

Far Cry 5 is a game that is heavily CPU dependent, so the Vivobook Pro 15 is able to pull to the top of the charts despite a less-powerful graphics processor.

One of the newer games in our suite, we have very little data on this game for this class of device, but the game is certainly playable on the Vivobook if you turn the settings down.

Much like Godfall, the demands of Borderlands 3 at maximum is just too much for the RTX 3050 but the game is very much playable with the settings turned down.

Although the Vivobook does outperform the Surface Laptop Studio here, it is still unplayable our enthusiast level of testing.

Another game that is heavily CPU bound, F1 2021 does very well on the Vivobook Pro 15, although some tweaks from maximum would be needed to game at 1920x1080.

The RTX 3050 is a moderately powerful graphics card, and for ASUS to fit it into this lightweight notebook makes for a welcome addition. It is not a 1080p gaming card by any means, but does offer a significant performance uplift from the integrated graphics, as well as the extra hardware capabilities of the RT Cores for software that can leverage it. For a device targeting the market segment the Vivobook does, it fits in very well.