Today’s announcement from SiFive comes in two parts; this part is significant as it recognizes that Intel will be enabling SiFive’s IP portfolio on its 7nm manufacturing process for upcoming foundry customers. We are expecting Intel to offer a wide variety of its own IP, such as some of the x86 cores, memory controllers, PCIe controllers, and accelerators, however the depth of its third party IP support has not been fully established at this point. SiFive’s IP is the first (we believe) official confirmation of specific IP that will be supported.

Announced earlier this year by Pat Gelsinger, Intel Foundry Services (or IFS) is one prong of Intel’s strategy to realign itself with the current and future semiconductor market. Despite having attempted to become a foundry player in the past, whereby they build chips under contract for their customers, it hasn’t really worked out that well – however IFS is a new reinvigoration of that idea, this time with more emphasis on getting it right and expanding the scope.

To that end, Intel has been reorganizing its manufacturing and operations hierarchy into its own vertical group under Keyvan Esfarjani, with IFS led by Randhir Thakur as President reporting to this group. As reported by CRN in the past week, Intel has recently hired a number of key talents from its foundry competition to aid this transition, including Hong Hao, the former head of Samsung’s North American foundry business, to ‘formulate business strategies and execute customer engagement plans’. Intel has also hired Bob Brennan, a former 22 year Intel employee most recently at Micron, as Vice President of Customer Design Enablement at IFS, assisting with end-to-end contract-to-product solutions for IFS customers. This includes engagement with Intel’s Design Engineering Group, putting customers on the right track with Intel roadmaps.

Simply offering Intel’s portfolio of technologies alone to customers isn’t going to entice many customers, and in order to compete with other foundry competition, Intel needs to engage with other IP holders to provide design kits and tools for other technologies. For example, if an Intel Foundry Services customer wants to use an Intel core paired with a third party memory controller on Intel’s 14nm process, that third party memory controller design has to be validated at Intel. Similarly, if a customer wants to combine Arm cores or other accelerators, that IP has to be validated. Intel has to create a structure of supported IP aside from their own, and today’s announcement is one of the initial steps to that. 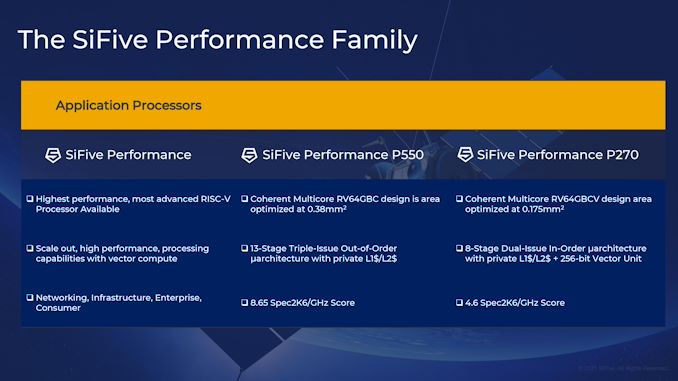 Today’s announcement from SiFive is the launch of a new family of ‘Performance’ cores, debuting with the P270 and the P550. Both cores are Linux capable, with full support for the RISC-V vector extension v1.0rc, and the P550 is SiFive’s highest performance core ever with a reported SPEC2006 int score of 8.65 per GHz. As part of that announcement, Intel is the lead development partner of the P550 core on Intel’s own 7nm process. That’s what the press release says.

In our emails with PR however, the wording was a little loose, and stated that

Intel recently selected SiFive to work with the Intel Foundry Services (IFS) business to offer IP to Foundry customers. As part of the growth and development of the IFS business, IFS is creating … the P550 on the Intel 7nm.

The first sentence is critical here; it broadens the scope of the initial press release beyond simple co-operation of a singular IP core (the P550) into something more encompassing. The first step on such an endeavor would obviously be a proof point, such as enabling the P550, but then going beyond to other elements of SiFive’s portfolio. How wide the scope is beyond the P550 has not been commented on at this time, however if all goes well, we could easily imagine a wide remit for SiFive solutions at any foundry. It should be noted that some musings have been made that Intel might be trying to acquire SiFive, however nothing that AnandTech could confirm or get comment on – the fact that the two companies are putting this announcement out today might dampen those rumors a little.

The fact that the press release also mentions 7nm is an interesting angle. We’re covering what Intel is making with SiFive P550 in a separate news article, as it is big enough news to get its own title.