AMD has expanded their suite so that an all-AMD laptop offers a lot of benefits, but the one area where they do not have their own in-house solution is for wireless. AMD is somewhat remedying the situation by partnering with MediaTek for Wi-Fi 6E, and branding the MT7921K adapter from MediaTek as the AMD RZ608. With the ASUS Strix G513QY, we get a taste of what that may bring, since ASUS is using the MediaTek MT7921 as the Wi-Fi 6 wireless solution. It is not the 6E, with 6 GHz support, but otherwise is going to be very similar. 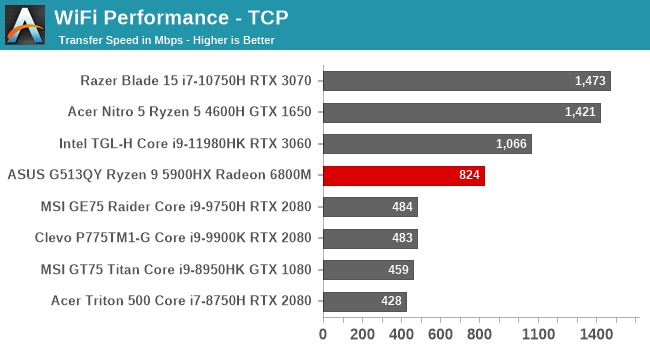 Sadly, the one aspect that does let the system down is the wireless. Intel’s wireless solutions are the best in the industry, with the fastest connections, and most stable driver stack. All other manufacturers are playing catch up with Intel, and that is certainly the case here. Despite the 802.11AX connection, performance is far behind the Intel wireless solutions, and worse, the connection dropped from time to time. For the display testing, which uses the Calman client pattern generator and connects over the network, the included Ethernet port had to be used or the connection would drop and the software would crash.

Hopefully, updated drivers will be able to address the shortcomings, but today, this solution is not the best. Luckily, those with Ethernet access would be able to use that if necessary. 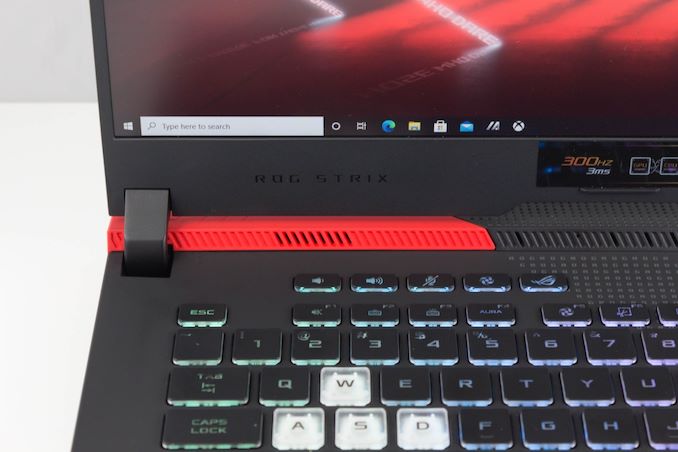 As with all notebook computers, the speakers are always going to be a challenge, since large speakers are necessary to hit low frequencies. The G513QY is outfitted with twin “Smart Amp” speakers, and while they do not do very well on the low end of the scale, the placement of them on the back of the notebook in the hinge area allows them to fire directly to the front, for good stereo separation. They also get quite loud, with SPL measurements of around 85 dB(A) measured one inch over the trackpad. 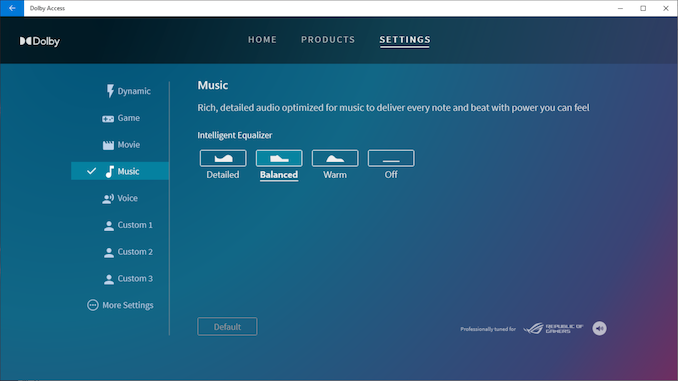 For the best results though, especially on a gaming laptop where the fans will be noticeable any time the device is under load, closed-back headphones are likely the best option. ASUS offers Dolby Access and Dolby Atmos headphone support for virtual 5.1.2-channel surround over the 3.5 mm headset jack. There is also two-way AI-based Noise cancellation which runs on the CPU which can be adjusted per-program.

With a 45-Watt processor and 145-Watt GPU, both of which can run over their rated TDPs, cooling is essential. Under full load, this ASUS Strix G513QY could easily pull over 230 Watts at the wall. To accommodate this power, ASUS leverages a 6-phase power design for the CPU, and a 10-phase for the GPU, and then in order to remove this heat without creating an excessive amount of noise, ASUS has used some clever engineering. 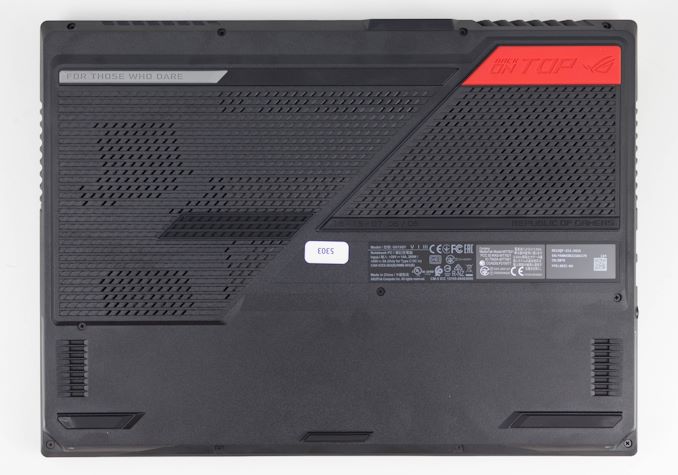 The first area they improved on was the thermal paste from the processors to the respective heat sinks. ASUS is utilizing liquid metal compound from Thermal Grizzly, which they say increased the heat transfer performance by 10% compared to traditional thermal paste they would use on a notebook. They also utilize a vapor chamber design to move the heat to the cooling fans, where new 84-blade Arc Flow fans increase airflow by 5%, and reduce noise by 3 dB over their previous design. ASUS tapers the fan blades from 0.1 mm at the base of the fan, and increasing the dimension out to the outer edges to draw in more air. Overall, the system provides 17% more airflow on the CPU, and 20% more on the GPU when coupled with the 0.1 mm thin copper fins on the radiator. ASUS also calls their fans Self-Cleaning Cooling 2.0, with upgraded anti-dust tunnels which improve airflow by 15%, and prevent buildup of dust on the fan blade and heatsink fins for long-term performance.

To see how the ASUS handled a high-load situation, Shadow of the Tomb Raider was run at its highest settings for an extended period of time.

Where we would normally see a mostly flat line for the GPU frequency, the Radeon RX 6800M bounces around significantly during the test, but that is likely due to the GPU load not being consistent. As already discussed, the 1920x1080 resolution just is not demanding enough on the GPU for it to run at its full frequency for 100% of the time. The CPU temperature does climb up to 96°C as a peak since it is the bottleneck in the system. Neither the CPU nor the GPU showed signs of throttling over time though.

The impressive thing about this is that while the system was drawing around 210 Watts sustained, the fan speed never got excessive, and the noise level was only around 50 dB(A) measured one inch over the trackpad. That is exceptional for a 15.6-inch gaming notebook with such a small form factor, and really shows that the attention to detail on the cooling system has paid off. At 50 dB, you could game with just the speakers on the notebook, although closed-back headphones would still be a better experience. At rest, the system outputs no noise at all either.

ASUS offers their Armoury Crate software to monitor the system, and provide updates. You can also adjust the lighting pattern as well, and pick your power settings. The ASUS software is very full featured and offers a lot of options to customize and tweak the settings. 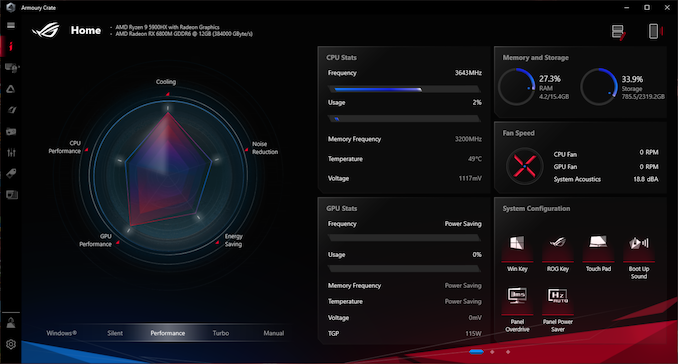 Choosing the power profile can be done manually, or left in the Performance when plugged in, and then the system will switch to Silent when unplugged. Or, if you want the maximum cooling and care less about the noise, you can set the device to Turbo mode and it will prioritize performance over everything else. In the Performance Mode though, the noise levels are never excessive, and the performance is still excellent.

AMD also has updated their Radeon Software, adding a new overlay option which will show the current level of AMD SmartShift that is being applied. As a quick refresher, SmartShift is where the system can transfer some of the TDP headroom from the CPU to the GPU, or vice versa. 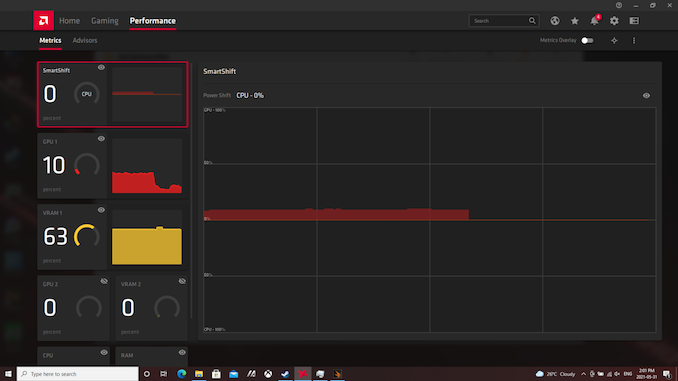 Although difficult to capture as the data scrolls quickly, as a demonstration the laptop ran the 3DMark Time Spy test, and the system did transfer power from the CPU to the GPU as expected. 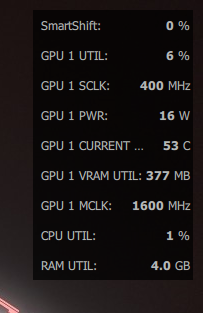 You can also enabled a graphical overlay on the system and add the SmartShift option to the overlay, so you can see what it is doing at all times. This can be enabled in games, but it seems AMD still has some tweaks to work out on it because it once caused the system to reboot, and the next time it was enabled, it just did nothing at all. It does work well in 2D though.