The ASUS ROG Strix G513QY features the AMD Ryzen 9 5900HX processor, which is near the top of the Ryzen 5000 range. With eight cores, sixteen threads, and a 4.6 GHz peak frequency, this Zen 3 powered processor offers a rated 45-Watt TDP, compared to the 35-Watt in the 5900HS. It is also overclockable, if you want to tweak performance a bit more. For a full deep-dive into the latest Ryzen 5000 series, check out Ian’s article where he tested the 5900HS in-depth.

Compared to the outgoing Ryzen 4000 series “Renoir”, the Ryzen 5000 series “Cezanne” moves from Zen 2 to Zen 3 cores, and is still built on TSMC’s 7 nm process. Instructions-per-clock is up, and thanks to the process, the per-core efficiency is quite high. AMD chose to stick with the Vega 8 graphics, even on the 45-Watt chips, and while not ideal on the 15-Watt U-Series chips, the GPU is mostly irrelevant in this class, as most 45-Watt CPUs tend to be paired with dedicated graphics. That is the case here, with the AMD Radeon RX 6800M. 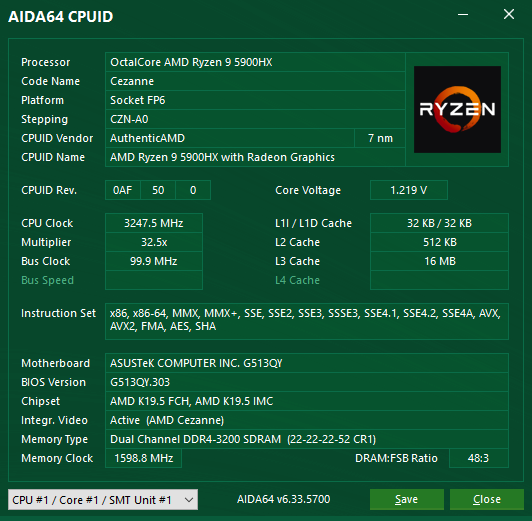 Thanks to the coupling of the AMD CPU and GPU, the ASUS Strix G513QY gets to take advantage of the shared power and AMD SmartShift. When the GPU is not active, the CPU can use up to 90 Watts of power, or up to 54 Watts sustained when the GPU is active. The GPU has a rated sustained power limit of 145-Watts, but can be increased up to 15% by leveraging some of the CPU’s power limit if it is not needed.

Memory on the unit is dual-channel DDR4-3200, with 16 GB in the review unit, but up to 32 GB available from ASUS. As this is a gaming laptop, the DDR4 will be in removable SODIMMs, allowing owners to upgrade their memory if they want.

To see how the system performs, it was run through our laptop suite. To compare the ASUS ROG Strix G513QY to any other system we have tested, please use our online bench tool. 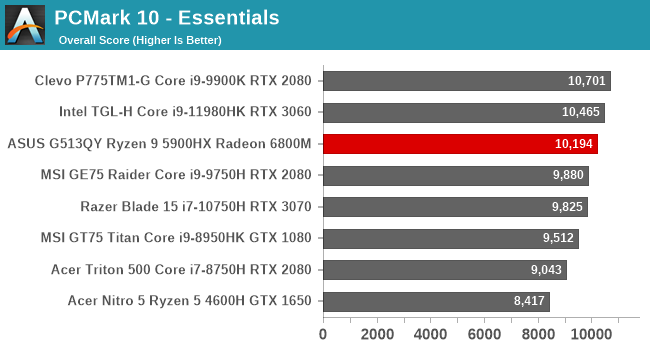 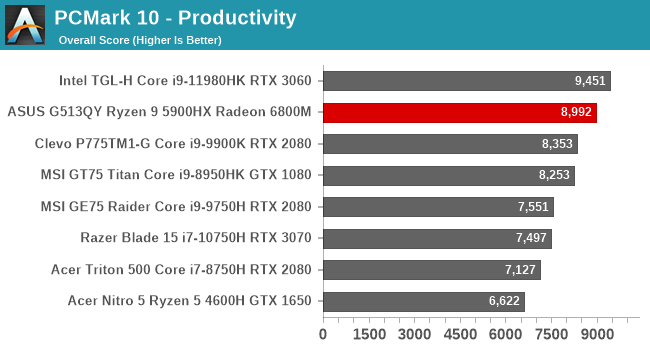 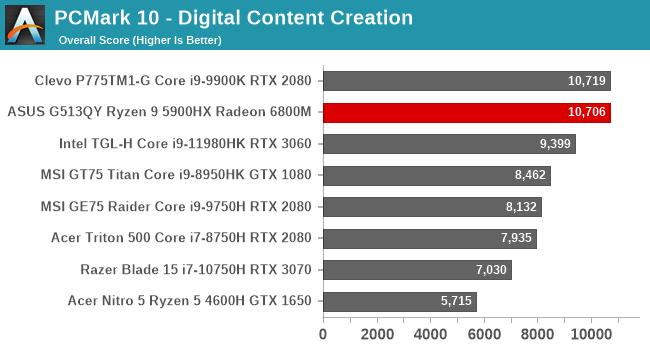 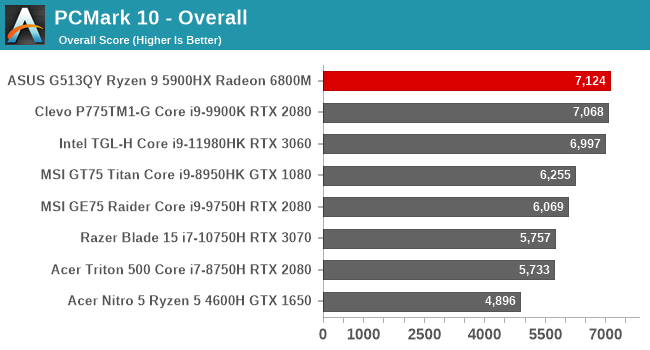 UL’s PCMark suite is a comprehensive benchmark tool which stresses all aspects of a system. In the overall suite, there are three sub-categories each focusing on different aspects of the system. The Cezanne powered ASUS G513QY is slightly behind the Intel reference system with the latest Tiger Lake-H processor in the CPU-related tasks, but the grunt of the Radeon RX 6800M GPU pulls it up significantly in the Digital Content Creation subcategory, which bumps the ASUS up to the very top of the list on the overall combined score. 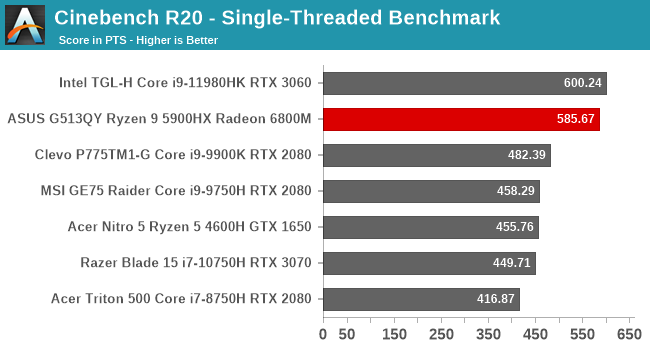 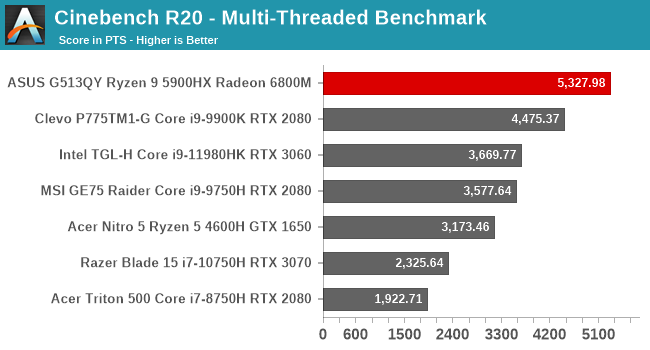 As a purely CPU test, Cinebench allows choosing between a single-thread workload, or multi-threaded, which is useful for many reasons. In terms of single-threaded performance, the Cezanne APU blows past the Skylake-based laptops, and the Zen 2 Ryzen 5 as well, but it is behind by just a hair compared to the latest Tiger Lake processor. But, thanks in part to TSMC’s 7 nm process, and the efficiency of the Zen 3 core, when all sixteen threads are active, the Ryzen 9 spreads its wings and takes off. It is a huge gap, even compared to the Clevo which is outfitted with a desktop-class 95-Watt processor. Part of the AMD advantage is that the system is able to dedicate more power to the CPU when the GPU is not active, and that clearly helps in this scenario. 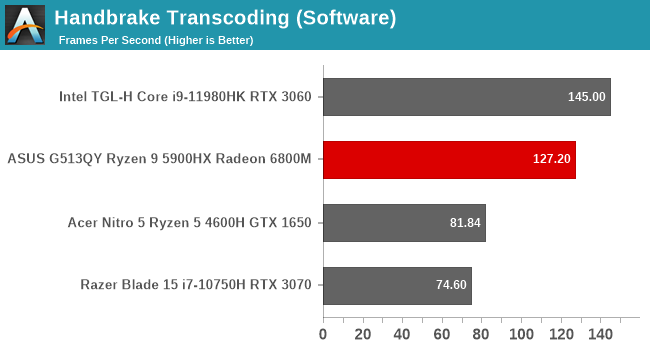 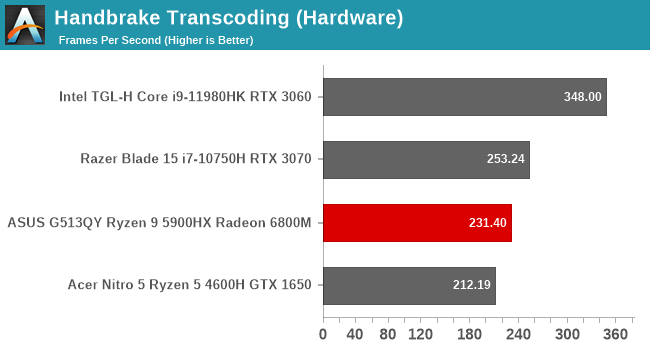 Likely the most popular video transcoding tool around, Handbrake offers the choice to perform the transcode on the processor, or on the fixed-function hardware in the media block. Software encoding will give the best results, even at the same quality settings, but if you just need to transcode something quickly and are not as concerned about the end product, AMD offers VCE, Intel offers QuickSync, and NVIDIA offers NVENC options to accelerate the workload. In terms of software encoding, surprisingly the Tiger Lake H laptop was able to nudge out the ASUS G513QY, and the AMD’s VCE solution is not as quick as NVIDIA’s media block at this test.

Another common tool is 7-Zip for file compression and decompression, and the utility includes a built-in benchmark which measures both. On the compression side, the Cezanne APU was edged out by the Core i9-11980HK, but on decompression, AMD’s processor is significantly quicker.

Web performance is not just a CPU test, but also a browser test, since web performance is predicated on the underlying browser scripting engine. For all tests, we leverage Microsoft Edge, although any benchmark result is a point in time, since browsers are constantly updated which may impact the results. 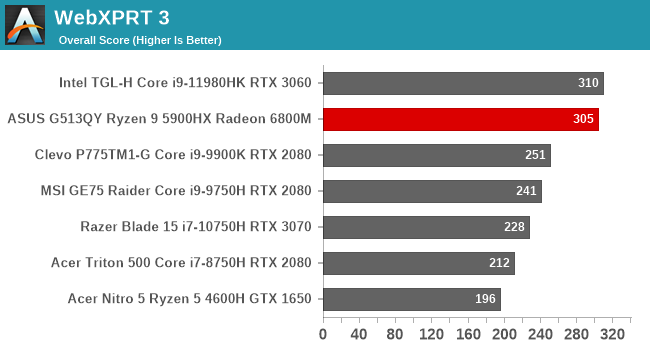 Although Cezanne comes a long way here, it is still slightly behind Tiger Lake in terms of web performance. Much of this comes down to the single-thread performance of the processor, and AMD’s efficiency advantage does not come into play, as the system will not be anywhere near its TDP.

One of the newer additions to the laptop testing suite is PCMark 10’s storage benchmark, which uses real-world traces in its workloads, simulating overall drive performance much more accurately than a simple bandwidth test. With Cezanne, AMD has stuck with PCIe 3.0, despite offering PCIe 4.0 on their desktop chips, whereas Intel has moved to PCIe 4.0 with Tiger Lake. The review unit of the ASUS Strix G513QY features the Samsung PM991, which is a PCIe 3.0 x4 NVMe drive. The system also has a free M.2 slot, for future expansion.

Although the drive can’t compete with the PCIe 4.0 drive in the Intel reference system, the Samsung PM991 does perform well in this benchmark. Compared to the other PCIe 3.0 systems we have tested, this one was at the top.