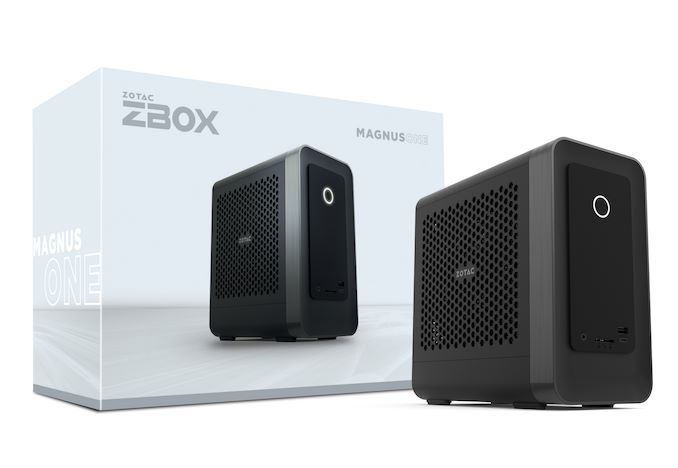 Zotac's mini-PC lineup received a new flagship as part of its CES 2021 announcements - the MAGNUS ONE. It features a Comet Lake CPU (Core i7-10700) along with NVIDIA's RTX 3070 GPU. The new model is a natural evolution of features from the previous MAGNUS PCs like the EK71080 and the EN1080K before it, with a heavy dose of inspiration from Intel's Ghost Canyon NUC. The EK71080 moved to a discrete GPU from a MXM-type one in the EN1080K. The new MAGNUS ONE continues that trend with the inclusion of a user-replaceable Zotac RTX 3070 Twin Edge in the system. Gone, however, is the humongous external power brick - Instead, we have a 500W 80+ Platinum internal PSU. The new 8.3L model is also meant to be oriented vertically. The last two aspects provide a distinct 'Ghost Canyon NUC' feel to the new MAGNUS ONE. 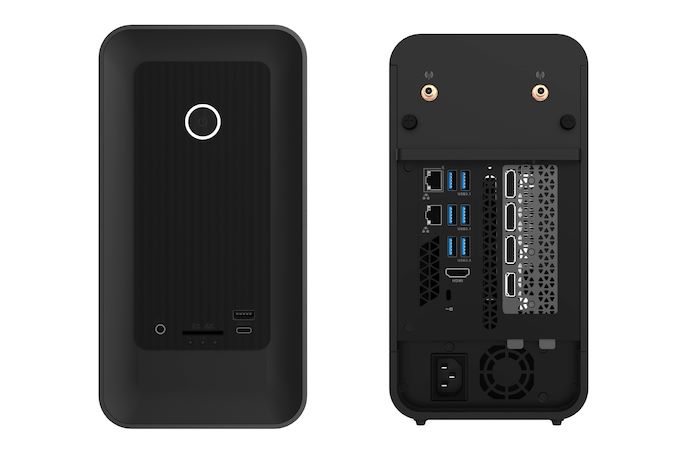 The motherboard in the MAGNUS ONE uses a H470 PCH. The CPU's integrated GPU display output (HDMI 1.4a) is also available in the rear panel. The RTX 3070 Twin Edge features four display outputs, and either set can be active for up to four simultaneous display streams. The PC also includes Killer AX1650 Wi-Fi and dual LAN ports (1x 1Gbps + 1x2.5Gbps)

A key difference between the new MAGNUS ONE and the previous flagships from an upgradability viewpoint is the user-replaceable discrete GPU. As long as the GPU to be installed consumes 220W at the maximum and is not longer than 230mm (9.06 in.) and takes up only two slots at the maximum, it is for end users to upgrade the pre-installed RTX 3070 a year or two into the system's service lifetime.

At 8.3L, the system is not as compact as the 5L Ghost Canyon NUC. However, the larger size and the honeycomb chassis should allow for more airflow and easier access to components. The MAGNUS ONE can also accommodate larger GPUs (the Ghost Canyon NUC tops out at 8in.)

The pricing for the MAGNUS ONE ECM73070C with Windows 10 (the 'PLUS' model in Zotac's earlier terminology) is on par with the flagship MAGNUS pricing of previous years. Given the use of the H470 PCH, it appears that Zotac has made optimal use of all the available I/O to deliver a compelling platform for consumers looking at a compact alternative to pre-built PCs from boutique vendors.