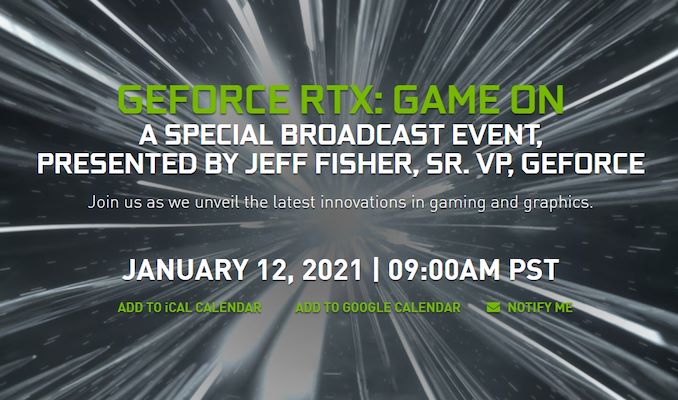 Even though the 2021 edition of CES will be an entirely virtual affair due to the ongoing coronoavirus pandemic, a number of major companies have still been lining up to schedule presentations as part or around the event. This has included Intel, AMD, and now NVIDIA, who today is announcing an event for January 12th.

Dubbed “GeForce RTX: Game On”, the broadcasted event will be presented by Jeff Fisher, NVIDIA’s Senior VP for GeForce. NVIDIA has set aside an hour for their CES-adjacent presentation, which will kick off at 9am Pacific on January 12th, 2021.

Today’s reveal is little more than a hold the date teaser, with NVIDIA promising to “unveil the latest innovations in gaming and graphics.” And while the company isn’t offering any more details than that, observationally we’ve seen that over the last several years NVIDIA has frequently used CES to announce new products and technologies. This goes particularly for laptop products, as CES has increasingly transformed into a laptop showcase for the PC OEMs. Fittingly, as NVIDIA continues its Ampere GPU release cadence with smaller and less power-hungry parts, the next chip expected to be released (GA106?) should be a good candidate for use in laptops.

One way or another, we’ll find out for sure next month with NVIDIA’s presentation. So stay tuned.