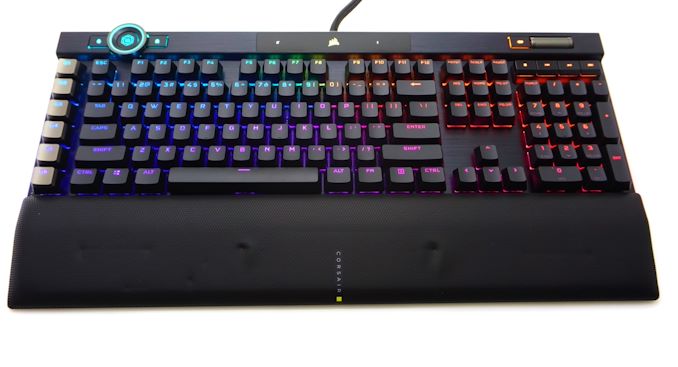 Corsair is a company that originally built its reputation on memory-related products, but they have long since diversified and established a significant presence in several other market segments over the past couple of decades, turning them into a globally renowned colossus of PC components and peripherals. Today, Corsair produces dozens of PC-related products, from RAM modules to CPU coolers and from headphones to chairs.

One of their most successful product segments outside of their memory roots has been advanced gaming keyboards. The company was one of the first and most enthusiastic developers of modern, consumer-focused mechanical keyboards. Their exclusive deals with Cherry, the most reputable manufacturer of mechanical key switches, allowed Corsair to slightly outpace their competition.

Over the last several years, innovation surrounding the PC keyboard market has been somewhat stagnant. There were hundreds of mechanical keyboards in the market but, aside from aesthetic improvements, we have seen very few advancements over the last few years. Most manufacturers were staying true to established solutions, developing keyboards with the same electronics and mechanical switches as the majority of their competitors, then basing the competitiveness of their keyboards on aesthetics, software, and value/price. So the market for mechanical keyboards is ripe for a shakeup – or at least a more significant advancement than we've seen in the past few years.

For today's review we are taking a look at Corsair’s latest gaming keyboard, the K100 RGB. As its name suggests, it is the successor to the renowned K95 RGB, one of the better – and most expensive – gaming keyboards Corsair has ever released. And for this successor, Corsair isn't just putting on a new coat of paint and releasing the keyboard anew. Instead, the K100 RGB features new opto-mechanical switches and completely new electronics, making it a one-of-a-kind keyboard in today’s commodify keyboard market.

We received the K100 RGB Gaming keyboard in a thick, sturdy cardboard box. The artwork is dark with yellow accents and aesthetically focused on a picture of the keyboard itself, following the same theme as the rest of Corsair’s peripherals lineup. 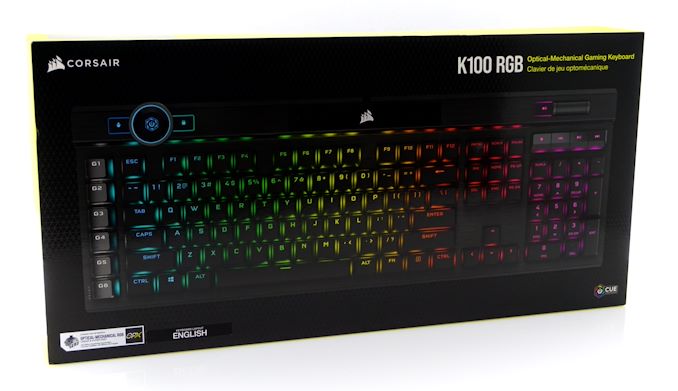 Inside the box, we found a basic manual and warranty leaflets, two sets of textured keycaps, and a plastic keycap puller. The extra ten keycaps are grey and have contoured, textured top surfaces that are supposed to assist tactile feedback while gaming. The first set is for FPS gamers and the second for MOBA gamers. Both sets are correspondingly contoured and textured. As a result, two keycaps, the W and the D, exist in both sets but have different contours. 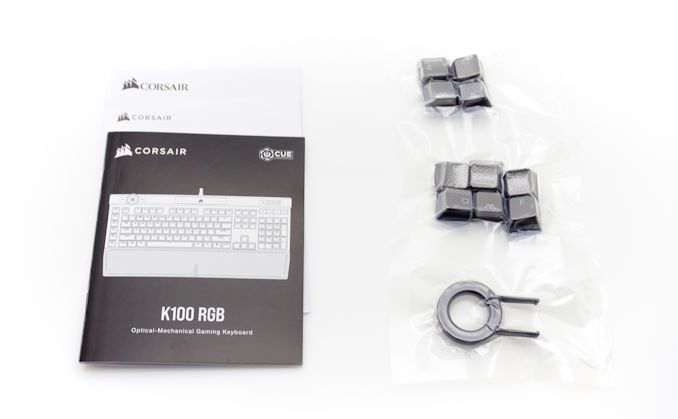 Corsair supplies a full-size wrist rest with the K100 RGB, with the company taking a much different approach than with any other keyboard they released to this date. The wrist rest is now padded, with a very soft textured synthetic fabric covering, and is magnetically attached to the keyboard. This magnetic coupling makes the insertion and removal of the wrist rest a seamless, split-second process, but is not strong enough for the wrist rest to stay in place if the keyboard is lifted or moved harshly. Its soft padded top is much more comfortable than most wrist rests that we have tried to this date but also is more susceptible to permanent damage, much like the scars our sample received during transport. 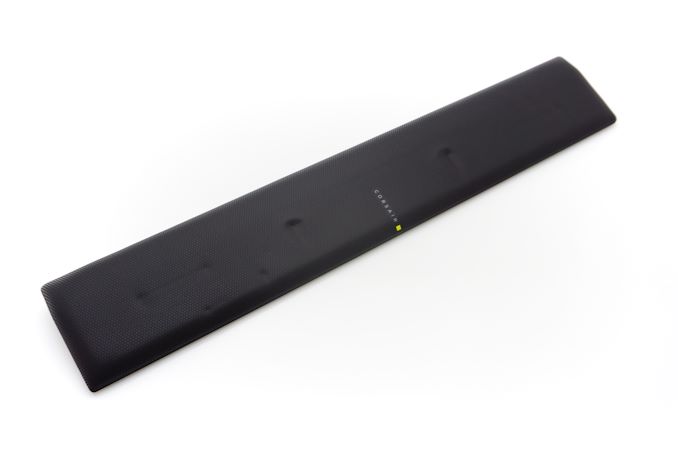 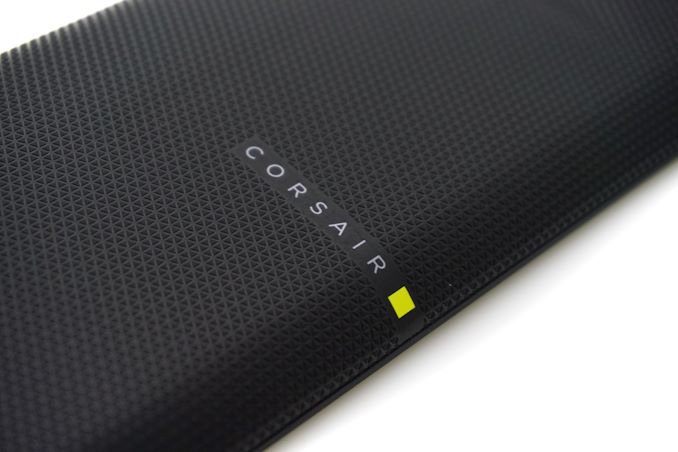 Corsair’s latest K100 RGB is similar to the K95 RGB Platinum that the company released a couple of years ago, at least as far as its size and number of macro keys are concerned. It is not externally identical to the older K95 RGB Platinum, but it is based on the same aesthetic design, featuring an anodized brushed aluminum chassis and having the keys attached directly to it, creating a floating keycaps effect. This design makes it very simple to clean, as a simple blow would remove most debris from the aluminum surface of the keyboard.

Most of the keyboard remains visually the same. Corsair’s backlit logo is still at the top of the chassis, on a highly glossy strip. The designer also placed the indicator LEDs on that strip, which are completely hidden while the keyboard is unpowered. Even when the indicator lights are on, their lights are so subtle that will never catch anyone’s attention if they're not looking for them. 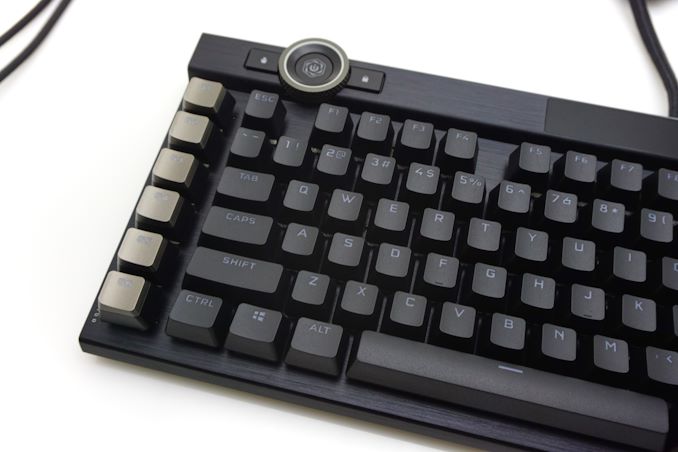 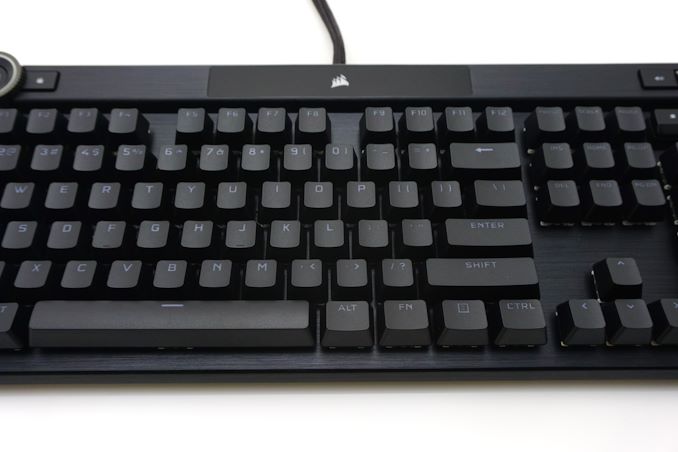 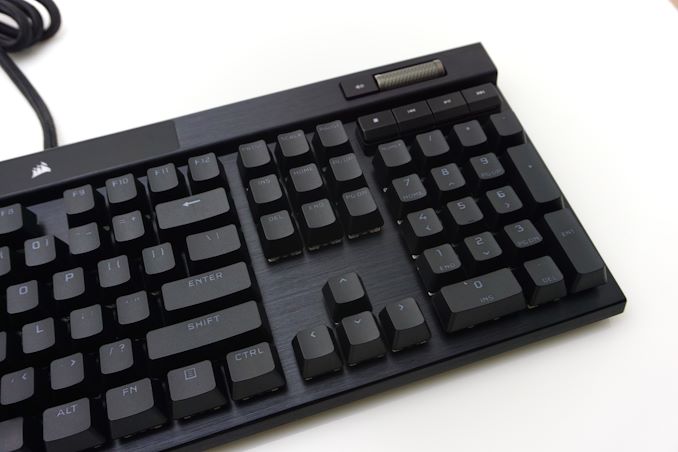 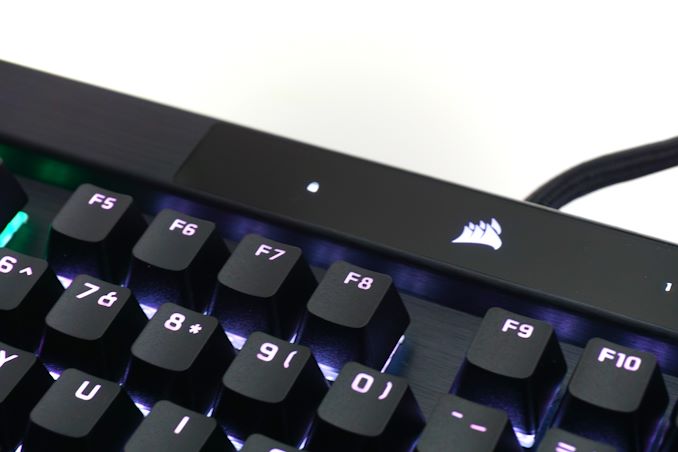 The Corsair K100 RGB Optical-Mechanical is based on a standard 104 keys keyboard, but expanded with a six additional keys to the left. In a bold move, Corsair made the K100 RGB compliant with the standard ANSI layout, something they have not done for any of their mechanical keyboards in the past. The bottom row of the keyboard has a 6.5× Spacebar and seven 1.25× keys (ALT, CTRL, WIN/Menu, and Fn keys) bottom row keys. The PBT keycaps have large, futuristic characters printed on them. Both the primary and secondary characters are found at the top of the keycap, as the designer wanted to take full advantage of the keyboard’s LED lighting. The six G keys to the left of the main keyboard are grey and contoured, yet not textured like the extra ten keycaps that Corsair supplies for gaming. 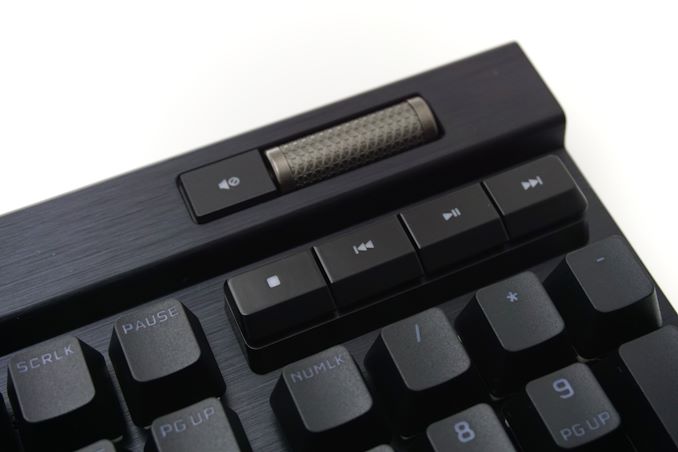 A metallic volume control wheel and a mute button can still be found at the right top side of the keyboard, with additional media buttons between them and the numeric keypad section. The volume control wheel is now wider and firmer, feeling better than every previous version of Corsair’s gaming keyboards.

The major design difference lies at the top left corner of the keyboard, in the form of a second metallic wheel. This second wheel can be used to perform a variety of actions, such as application switching and LED brightness control, selectable via the tactile button in its center and programmable in Corsair’s iCUE software. As we will see while exploring the new options in Corsair’s software, the secondary wheel can dramatically improve the flexibility of the keyboard, be it for productivity or for fun. Two more tactile buttons, one for profile switching and one for locking specific keys, can be seen on either side of the rotary wheel. 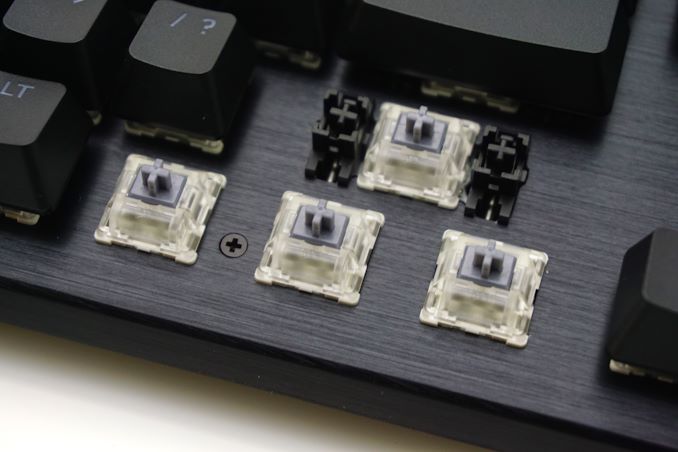 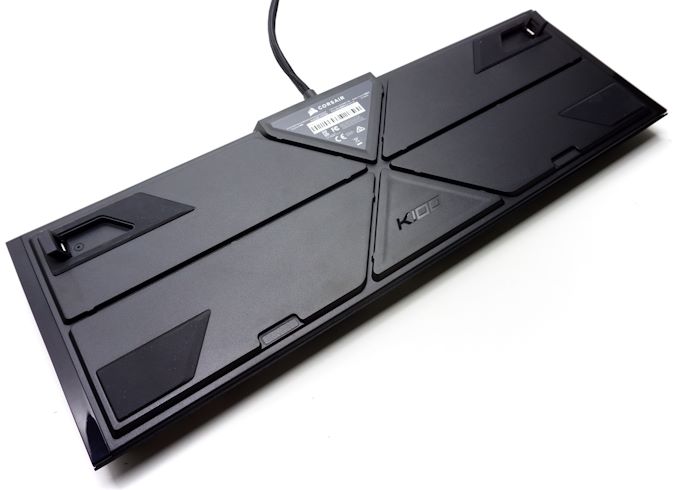 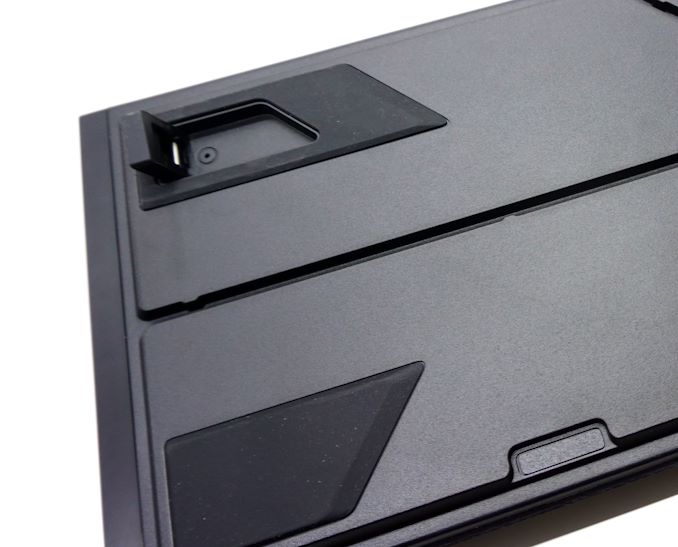 The underside of the K100 RGB is riddled with wire pathways, allowing users to route the wire of a mouse or headset underneath the keyboard. There are four very large anti-skid pads, firmly holding the keyboard still on any surface. The grip of the pads is so strong that the tilt feet are being forced to retract if someone tries to push the keyboard sideways while it is sitting on a desk. 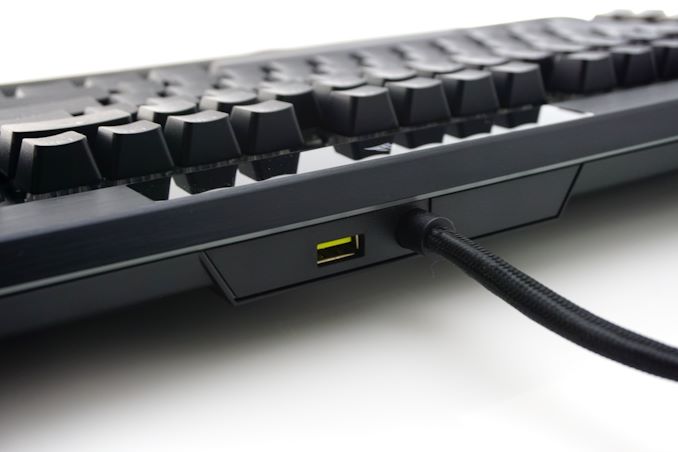 That said, the second connector also serves another purpose: driving the USB host port on the keyboard itself. Corsair has opted to implement a full pass-through solution (rather than using an internal USB hub), so the second USB connector needs to be inserted (regardless of power needs) in order to supply a connection to the host port. The final product is a bit trickier than it otherwise needs to be, but such is the case when ensuring the keyboard will be fully backwards-compatible with USB 2.0 hosts. 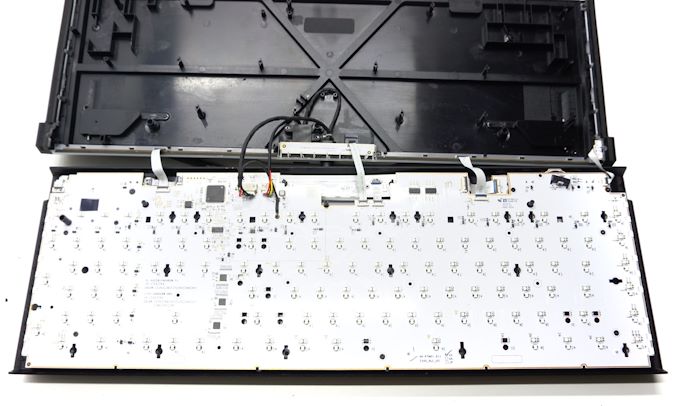 Opening the K100 RGB Optical-Mechanical keyboard is going to cause permanent visual damage to it, as it was not designed to ever be disassembled by an end user. There are screws beneath the glossy top part of the keyboard that cannot be removed and reinstalled, as well as foam glue on its sides. Regardless, there are practically no serviceable parts inside, as the switches have no contacts and the optical sensors would require an expert to remove/replace them. 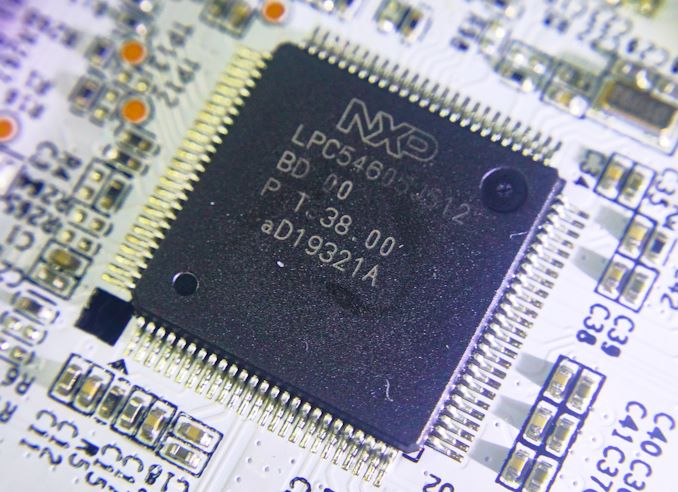 On the white PCB, we find the heart of the K100 RGB, an NXP LPC54605J512 microprocessor. The ARM Cortex M4 microprocessor has a frequency of 180 MHz, as well as 512 kB of flash and 200 kB of SRAM embedded to it. This certainly is a much more powerful processor than the ones we are used to seeing in gaming keyboards, but unfortunately it doesn't lend itself to analysis on software level to assess how Corsair’s engineers implemented multi-threading with it.