TSMC: We have 50% of All EUV Installations, 60% Wafer Capacity

One of the overriding central messages to TSMC’s Technology Symposium this week is that the company is a world leader in semiconductor manufacturing, especially at the leading edge process technology. To further hit the message home, TSMC showcased a slide indicating where it stands in relation to others: by using a combination of public ASML statements and their own internal purchase sheets, TSMC predicts that they have ~50% of all the active EUV machines installed worldwide. Beyond that, the company also has a number of ~60% for cumulative EUV wafer production.

Current known public EUV processes from the big fabs include TSMC’s 7+ and N5, as well as Samsung’s 7LPP (and anything below), with Intel’s EUV efforts only entering in its own 7nm portfolio next year. Anything beyond these processes at the leading edge will continue to extend EUV use. EUV machines typically have a lower throughput, anywhere from 120-175 wafers per hour, than regular DUV machines which can reach 275 wph on the latest versions, however since 1 layer of EUV typically replaces 3-4 layers of DUV, the throughput is higher, but nonetheless the desire to scale out to multiple EUV machines to increase the physical number of wafers is a keen target for these foundries. 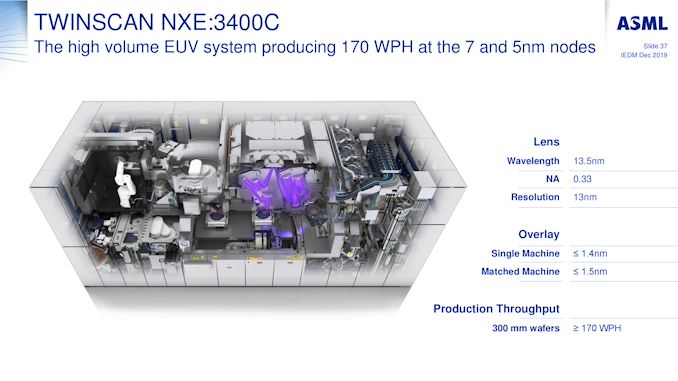 The only company that makes EUV machines is ASML, and the company publically announces how many machines it sells each year. The details are as follows:

Note that each year so far, ASML hasn’t quite hit its targets, but has done near enough, although sales in Q1 2020 were lower than I would expect, indicating that by end of Q2 2020, ASML has only shipped 13 out of the proposed 35 systems. These numbers include all the different types of Twinscan NXE machines that ASML has built, with the more recent ones having better throughput (and sometimes the older ones get retrofitted). As of the end of Q2 2020, we predict that ASML has shipped around 71 of these EUV machines, and will likely hit 90 by the end of 2020. Some observers have noted that ASML may have a backlog of as many as 49 EUV scanner orders, even with these shipment targets. 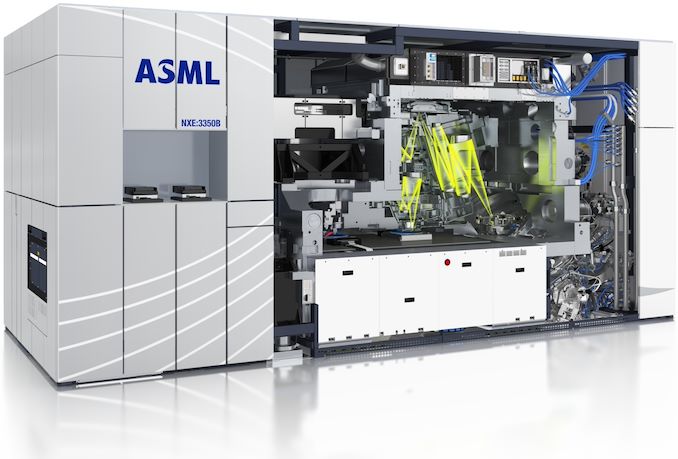 If ASML has shipped 71 machines, that would mean, according to TSMC’s numbers, the company has around 30-35. Note that TSMC’s numbers are for ‘Installed EUV’ machines – we learned from our trip to GlobalFoundries in Q1 2018 that it takes up to 6 months from getting the parts to calibrating the machine for use. At present, some of these foundries therefore have EUV machines sitting around waiting to be installed, or in the case of Intel, perhaps only in use for early testing or pre-risk trials. We know that GlobalFoundries had two early EUV machines, installed one, but ended up selling both when it decided not to pursue leading edge 7nm, and SMIC ordered one but as far as we know it wasn’t installed due to restrictions imposed by the US.

As TSMC grows its Fab 18 for N5 production, and ramps its EUV integration, it will be interesting to see if TSMC is ever limited by the number of machines it has. At some point Intel is going to want to buy a number when it deploys its 7nm processes (I’ve seen predictions that Intel has at least ~10 machines already, but I can’t confirm that) as well, so there might be a tussle for who gets their order delivered first.

One thing is for sure however, ASML is sitting pretty right in the middle with a monopoly on everything. I still have an invite to visit one of their EUV machine factories in Connecticut, which when the COVID mess is all over I intend to follow up on. It should be exciting.