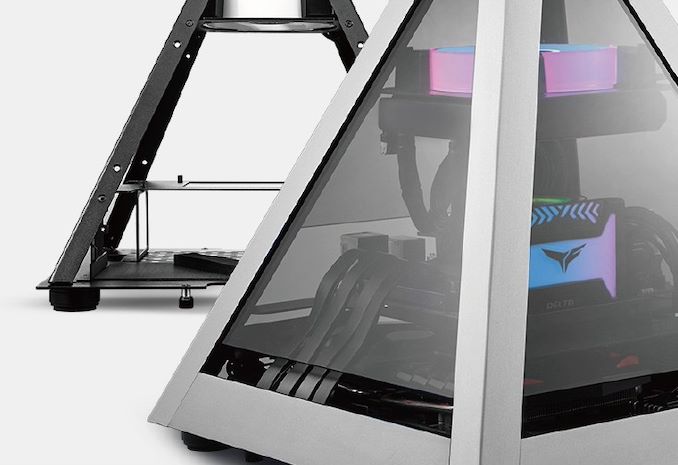 Back at Computex, we stumbled across a uniquely-styled polyhedron-shaped chassis by AZZA, the Pyramid 804. To cater to small form factor aficionados, AZZA has announced its intention to release a mini-ITX version of its Pyramid 804, the smaller Pyramid Mini 806.

We've seen a lot of striking and unique case designs over the last couple of years, some conceptual at trade shows and some beyond that point and in the retail channels. During 2019, AZZA brought to life its Pyramid 804 chassis which is a very notable shape known throughout history. The Pyramids of Giza looks to be the primary inspiration behind the design and is one of the most iconic achievements of humankind.

The AZZA Pyramid Mini 806 mini-ITX chassis builds upon the stylings of the larger sized 806, and is aimed at small form factor enthusiasts looking for a flashy flat for a mini-ITX system. Designed on the premise that the motherboard is mounted horizontally within the case, the frame of the Pyramid Mini 806 is constructed from 1.5 mm thick SPCC rolled steel with 2.0 mm thick aluminum. 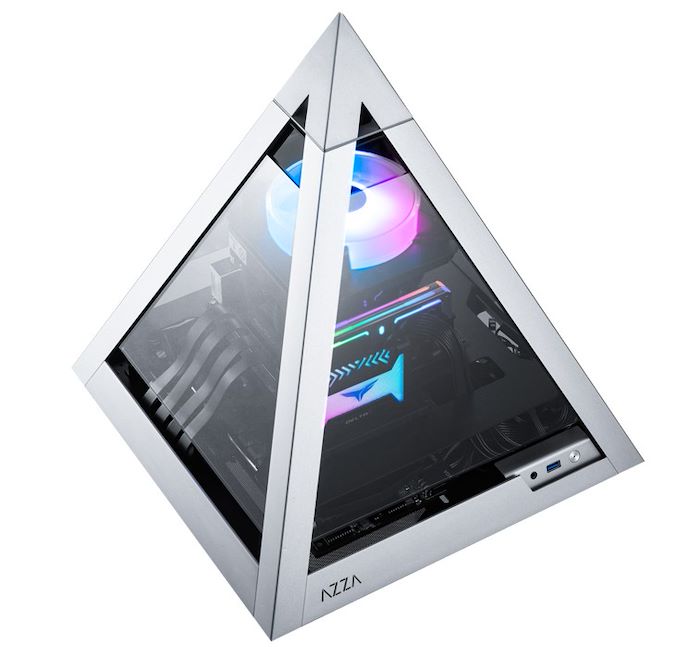 It includes support for CPU coolers with a maximum height of up to 85 mm, while video cards with a maximum length of 280 mm can be accommodated the pyramid-shaped chassis. There are two internal 2.5 mm drive bays, with two expansion slots for mini-ITX motherboards which conventionally include a full-length PCIe x16 slot. On the four different sides of the Pyramid Mini 806 are four tempered glass panels, with a single Hurricane II Digital RGB 120 mm cooling fan included in the top. It has limited water cooling support with official support for up to 120 mm radiators, which would suit a 120 mm AIO CPU closed-loop cooler.

In an isolated chamber located at the bottom of the chassis, there's space specifically designated for an SFX power supply. Included in the accessories bundle is a 200 mm long PCIe extension cable designed for mounting and connecting a graphics card. There is also a single USB 3.0 header, a front panel audio connector and a power button. The official dimensions of the case are 435 x 368 x 368 mm, with a total weight of 6.3 KG.

Although there is no official date of release, AZZA states that the Pyramid Mini 806 won't be available until November. AZZA also hasn't released any pricing information. Still, it is likely to be in the $250-350 price point given its unique design, use of aluminum in its construction, and the additional price premium small form factor chassis generally come with.