The LG V60 and VELVET Review: A Classic & A Design Restart 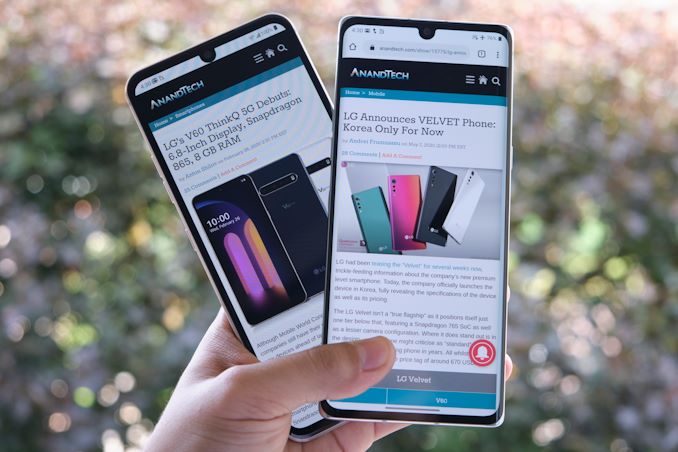 It’s been a few months since LG has released the LG V60, and since then the company has also finally managed to launch the new Velvet phone to western markets outside of Korea, such as Germany. The two new 2020 phones are quite contrasting devices for LG – representing what one could say the company’s classic design philosophy versus a newer, more refreshing design language. They’re also contrasting devices in terms of their specifications and positioning, with the V60 being a successor flagship devices with a high-end SoC, whilst the new Velvet is a “premium” design with the new Snapdragon 765, coming at a lower price point and some compromises in terms of specification – but not too many as to call it a mid-range phone.

Both phones are overdue a closer look, and that’s precisely what we’ll be doing today.

In terms of specifications and the brains of the devices, as mentioned, the LG V60 is a familiar phone as it’s simply sporting the best of the best. The Snapdragon 865 features four Cortex-A77 cores, one of which clocks in at up to 2.84GHz and three others at up to 2.42GHz, paired with four low-power Cortex-A55 cores at 1.8GHz. We’ve seen excellent performance and power efficiency out of Qualcomm’s latest chipset in other 2020 flagship devices, and the LG V60 is pretty much in line with the pack in terms of performance and efficiency.

The LG Velvet on the other hand is amongst a smaller number of devices which make due with Qualcomm’s new Snapdragon 765 SoC. This “premium” model functionally has the same level of features as the flagship Snapdragon 865 SoC, but just comes at lower performance levels. In terms of IP, we find two Cortex A76 cores, one up to 2.3GHz and another up to 2.2GHz, paired with six low-power Cortex-A55 cores at 1.8GHz. The GPU in the form of the Adreno 620 is also smaller than the bigger brother’s Adreno 650 configuration.

What’s special about both these SoCs is that they’re 5G enabled. The LG V60 makes use of an external X55 modem for connectivity, while the Velvet integrates its modem capabilities inside of the Snapdragon 765.

Both phones feature 8GB of RAM (LPDDR5 for the V60 and LPDDR4X for the Velvet), and feature 128GB of storage, expandable via microSD slots. 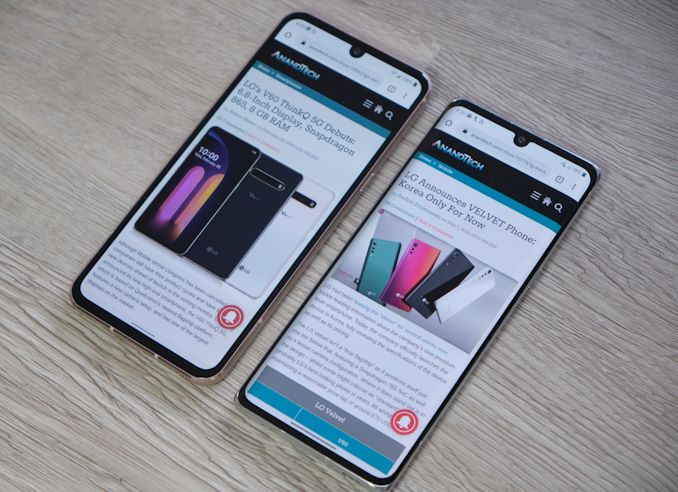 In terms of designs, both phones are very different to each other. The one thing they share in common is the display specifications; both phones feature 6.8” 2460 x 1080 OLED displays. The resolution doesn’t surprise too much for the Velvet as it’s a lower priced phone, but it is quite weird to see LG go backwards on the V60, offering a downgrade from the 1440p resolutions of previous, smaller, V-series phones. There are battery life considerations here which we’ll discuss in more detail later, but it does stretch out quite a bit for displays of these sizes. 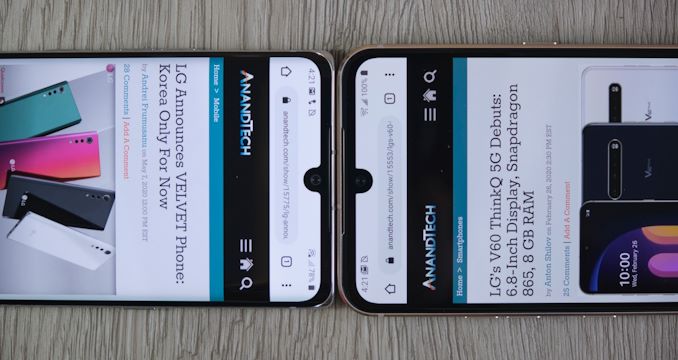 Both displays still make use of “dewdrop” notch designs and the cut-outs here are virtually identical between the two phones. The Velvet tries to smooth out the bezel corner near the cut-out via blacked out pixels, but other than that I wouldn’t be surprised if these were actually the same display panels.

Of course, the immediately visible difference between the two phones is their bezel designs. The V60 has a very classic look to it; a flat screen with some quite sizeable side bezels and a chamfered metal frame. The Velvet on the other hand is a lot more contemporary, employing a curved front screen design on its sides, with only a thin glossy metal frame.

You could argue that the V60 looks a lot more industrial, but for me the ergonomics of the Velvet are immeasurably better – it’s not only a physically narrower phone, but it just feels much better in hands thanks to its curvatures as well as thinner form-factor. 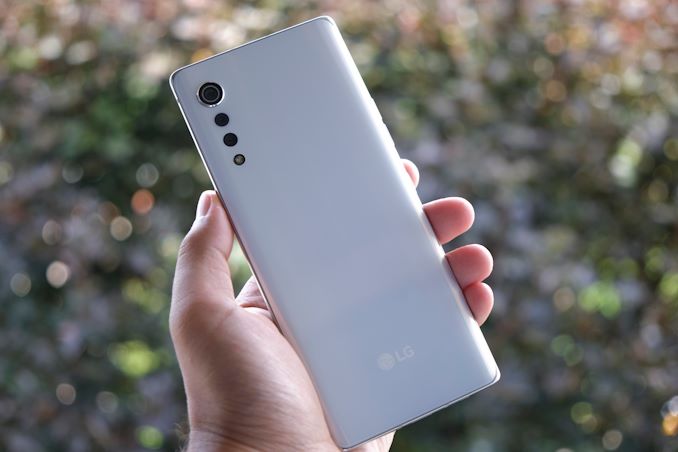 Despite the fact that the screen diagonals on both phones are identical, and maybe even have the same panels, the Velvet is a much handier phone. There’s also a big weight difference between the two units, as the V60 comes in at a hefty 218grams versus the Velvet’s 180g. Admittedly, the V60 uses a bigger 5000mAh battery whilst the Velvet is 14% smaller at 4300mAh (which is still respectable). 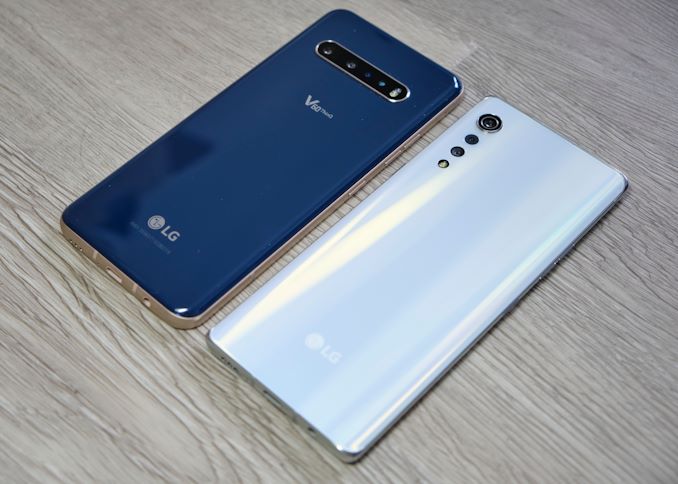 On the camera side of things, besides the SoC, it’s also where we see bigger differences between the two phones capabilities. The LG V60 has a new generation and larger 1/1.7” main camera sensor coming in with 64MP resolution, with a quad-Bayer colour filter layout binning down to 16MP in regular photos. LG uses this module’s high native resolution to achieve lossless 2x zooming – a necessity as the phone lacks a dedicated telephoto module.

The Velvet uses a similar method, albeit with a 48MP primary camera sensor that’s physically smaller in size than that of the V60’s.

In terms of ultra-wide-angle modules, the V60 features a 13MP sensor while the Velvet makes due with a mere 8MP unit. Besides price considerations, I think the Velvet might be limited by the thickness of the phone here and the deployable sensor sizes, as the phone lacks any protrusions with the UWA module sitting flush with the back glass panel (The main camera does have a small bump).

There’s also an extra ToF sensor on the V60, and unspecified 5MP depth sensor on the Velvet – both don’t actually serve as capturing modules but augment the capture abilities of the phones in modes such as portrait mode.

At the bottom of the phones, we see a similar setup of 3.5mm headphone jack, USB-C port and a three-holed bottom speaker setup (The top earpieces also serve as stereo speakers for playback). The fact that these phones still include the 3.5mm headphone jacks in 2020 makes them actually stand out to the rest of the competition who had opted to drop the useful connector in favour of profit making selling wireless audio accessories. Good on LG for sticking with their ethos.

Overall, the phones in terms of design are quite contrasting, and if you wouldn’t be familiar with them nor see their brandings, it would be hard to believe that they’re actually from the same company, released only a few months apart from each other. LG has had considerable trouble with the industrial design over the last few generations and the V60 is pretty much a continuation of that “outdated” look. The new Velvet is a fresh breath of air and I feel it actually belongs in 2020, its ergonomics are substantially better and the build quality is I feel higher than that of the V60, a bit ironic given that the two devices are positioned the other way around in terms of pricing and product categories.