EnGenius has unveiled a new series multi-gigabit PoE++ L2+ networking switches with multiple NBASE-T ports. The EnGenius ECS2512FP and ECS2512 switches are designed for small and medium businesses as well as large living environments, and along with their fast switching capabiltiies, one of the models is also capable of Power over Ethernet to deliver power to remote, high-performance devices like Wi-Fi 6 access points. Both models can be managed remotely using EnGenius cloud-based software. The manufacturer is calling its new switches ‘affordable’, though without listing official prices.

Both new switches from EnGenius — the ECS2512FP and the ECS2512 — support 120 Gbps of switching capacity and are fed via eight 2.5GBASE-T ports along with four 10GbE SFP+ slots for fiber uplinks. Meanwhile, the more advanced ECS2512FP model supports the IEEE 802.3bt Power-over-Ethernet, allowing it to transfer up to 240 W of power to such power-hungry devices as Wi-Fi 6 access points, PTZ cameras, or AV controllers.

One of the key features of the latest EnGenius switches is their support for the company’s subscription-free EnGenius Cloud that allows to monitor system metrics in real time, display network topology, troubleshoot, problems, and analyze network’s behavior. According to the company, its switches and cloud services provide ‘enterprise-class features’ and essentially simplify monitoring of networks. While such capabilities bring a lot of value for companies, they come at a cost that typically makes these kinds of multi-gig switches prohibitively expensive for consumers.

EnGenius says that its ECS2512FP and ECS2512 switches will hit the market next month and that they will be ‘affordable’. Unfortunately, without an actual price it is impossible to say whether the switches will be reasonably priced for an average person, or for a business that wants to save on multi-gig network management. 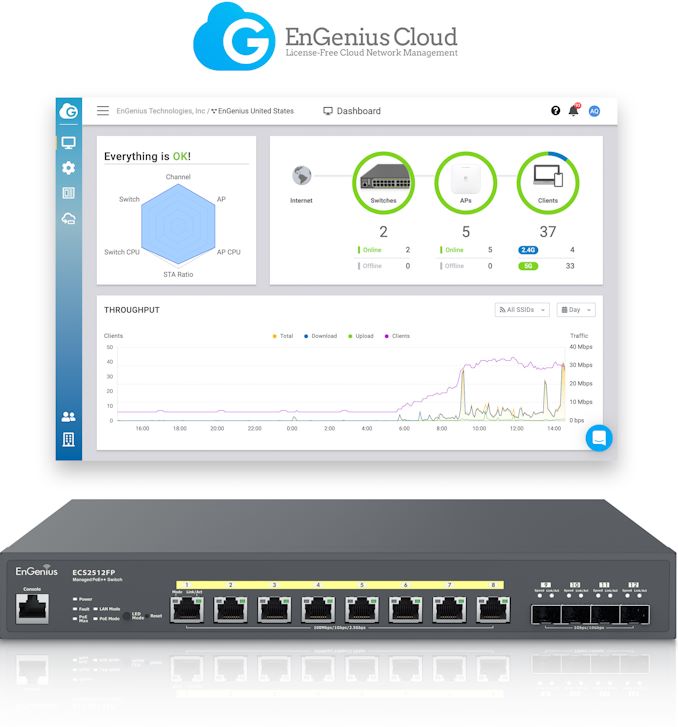