Some Black Friday deals are wild. A store might offer only a couple of units of a particular TV, discounted by 66%. There might be a few pieces of a flagship smartphone at your local electronics store at half price. These are designed to entice customers through the door, and if you’re brave enough, ensure the cold for up to 12 hours to get that bargain of the year. But one of the key observations about looking at Amazon’s Computing and Components section every Black Friday, particularly this year, is that most of the discounts are for complete trash. After the headline external storage discounts, it’s just page after page of USB cables and smartphone holders. But one thing did catch my eye: an entire PC, for only £57 / $61! How can an entire x86 desktop PC be sold for so little? We did the only thing worth doing: we purchased it. 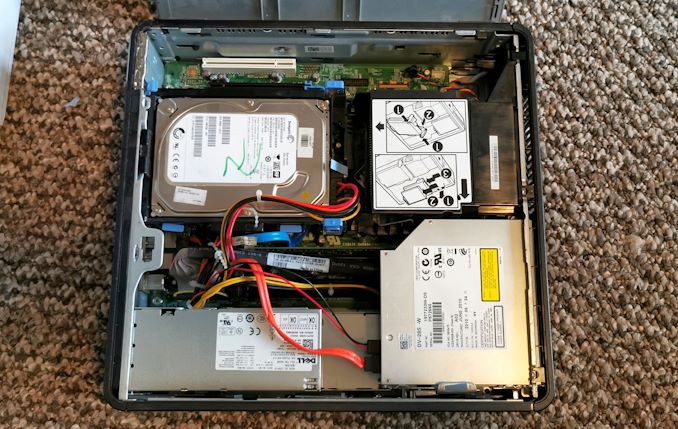 So let’s put this into context – Amazon sells tablets, desktop PCs, smartphones, and all other sorts of computing gadgets. A simple Atom based desktop small form factor PC can be around $160, or perhaps an Android based HTPC for the same amount. Amazon’s only Fire 7 tablets are £50/$50, reduced for Black Friday down to £30/$30, but if you want something a bit beefier, the Fire HD 8 is $80 regular/$50 on sale. The point is that while tablets regular feature in the mid double digits for pricing, a full desktop certainly doesn’t. So what makes this one so cheap?

*For those that aren't aware, because different US states have different amount of sales tax / VAT, the prices quoted online do not include any sales tax. We are quoting US prices here without sales tax, as we usually do. UK prices included sales tax unless otherwise indicated.

This PC uses a CPU that was launched in 2009. The Pentium E6500 inside is a first generation Core microarchitecture called (Wolfdale-3M with 2MB L2) processor with two cores running at 2.93 GHz, and is built on a Dell custom Socket 775 motherboard. This CPU was built on Intel’s 45nm process, and features only 228 million transistors (compared to the billions today), and has a TDP of 65 W. It uses DDR3 memory, but is so old it doesn’t even have AVX instructions: SSSE3 is all you can get here. Technically the recommended retail value of this processor when new was $68-$75, which was a low-end chip even for 2009.

The listing on Amazon is for a refurbished Dell Optiplex 780 – an office form factor machine that is very typical of one you might see in an office that hasn’t been updated yet (this is probably where this unit came from). The listing for the machine promises a few things: a CPU at 2.6 GHz, 4 GB of DDR3, a 160 GB HDD, and 802.11abg Wi-Fi, as well as Windows 10. What we received was a 2.93 GHz processor (woohoo!), 2x2 GB of DDR3, a 250 Gb HDD (woohoo!), no Wi-Fi (boo), and a full copy of Windows 10. The fact that this comes will a full blown copy of Windows 10 Pro, which even at its cheapest is around $20, astounds me. Even if the whole unit is a refurb, that’s the one part that is most likely new: and given that the value of the contents are around $30, that only leaves $10 for the actual hardware.

Instead of Wi-Fi, we get a 10/100 ethernet port. There are plenty of USB ports, and the front has a CD/DVD tray. The processor doesn’t have any integrated graphics, but there’s no add-in card here: this machine has a separate onboard Intel GMA4500 chip providing outputs, either by a VGA/D-Sub cable or, perhaps surprisingly for a 2009-derived system, DisplayPort. That’s Dell, always thinking ahead (said no-one, except today). There’s also a COM header and an LPT port at the back. 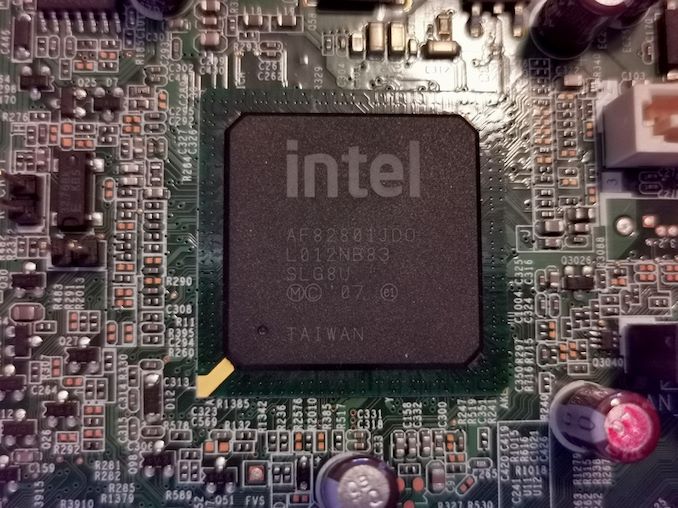 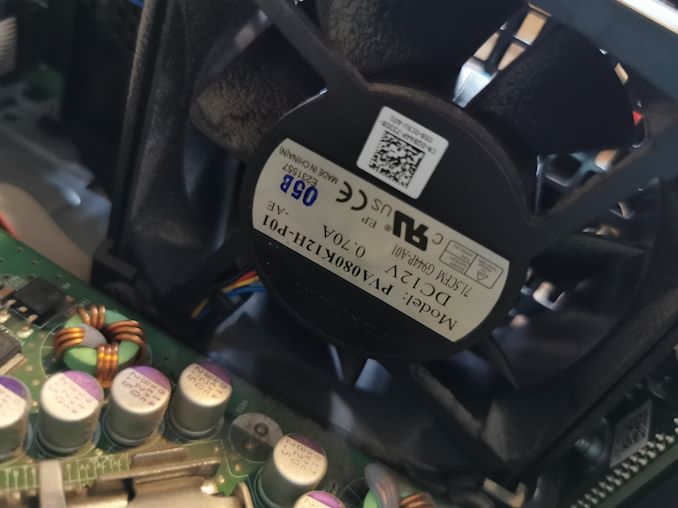 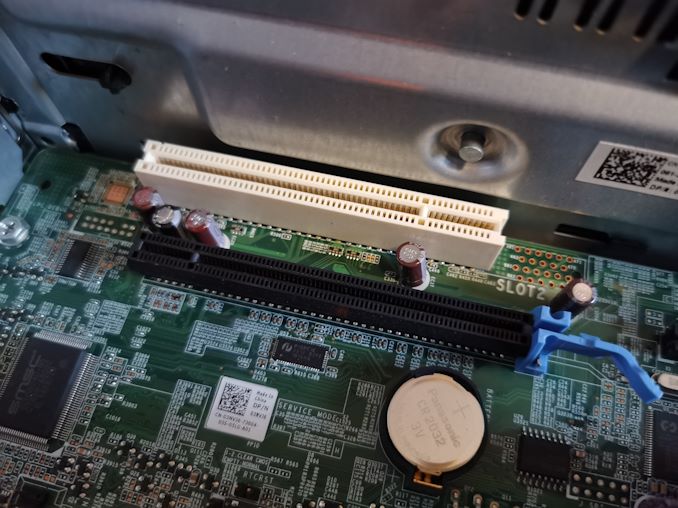 Inside is where some fun begins. There’s a half-height PCIe x16 slot, if anyone wants to put in a cheap graphics card, but we can open up the heatsink to see the processor underneath. 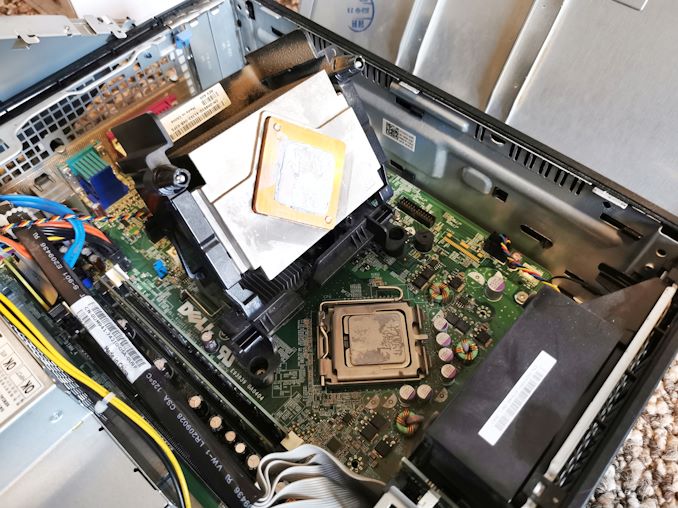 The heatsink is actually a lot beefier than I expected – it has a full copper core, and is screwed down really quite tight. As for the CPU, looking at eBay, an E6500 CPU can be had for as little as $4.61. The fastest DDR3 s775 processor on the market is a Q9650, although that is a 95 W processor – if you wanted to upgrade this thing, then a Q9550S at 65 W TDP might be your best bet, although these sell for as much as this entire system! A Q9550S would however get you four cores at 2.83 GHz. 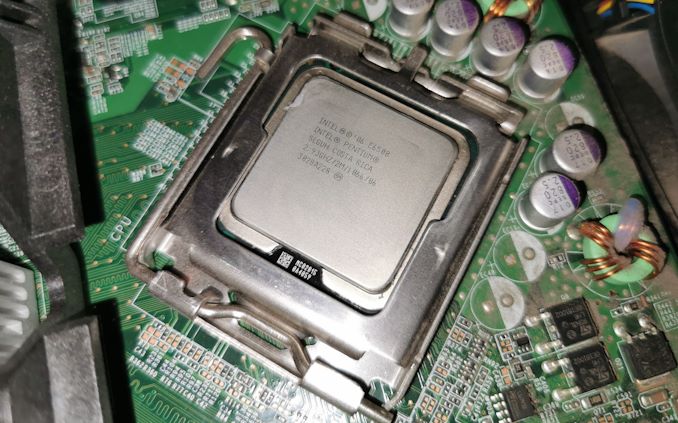 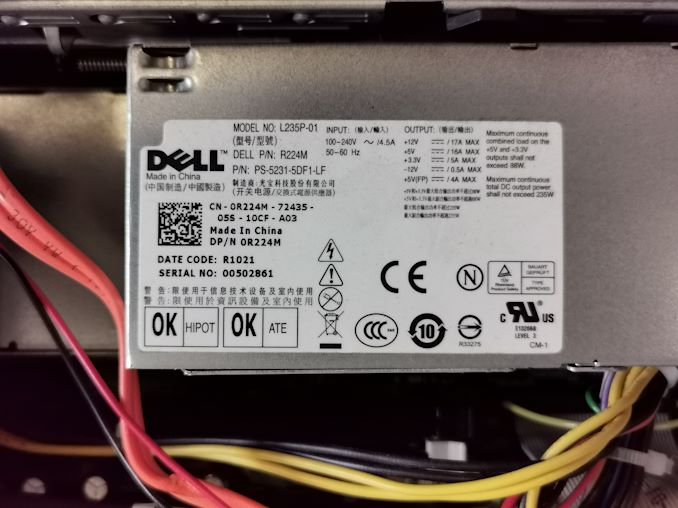 Everything else pretty much looks normal. The integrated power supply is a Dell unit rated for 235 W, which is easily sufficient for this system although there’s no telling how old it is – the unit is the exact model which was designed for the Optiplex 780.

If all of this, for this price, has seemed great so far, then the memory section is going to annoy you to no end. It annoys me, that’s for sure.

The listed said 4 GB of DRAM, which in this modern age I assumed would be one module, and we’d end up with a system running in single channel bandwidth. For this price, I assumed nothing less. However, on opening the unit I was greeted with two modules of 2 GB. These are Samsung models actually built for HP (it’s a refurbished system, or code for mix-and-match), and are DDR3-1333 speeds. The system runs them at DDR3-1066 7-7-7, so there’s plenty of headroom for them.

Upon entering the BIOS, you end up being greeted with this: 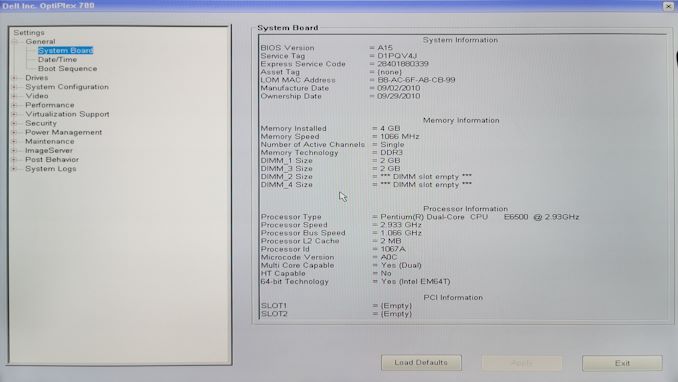 Now, moving one memory module over to the other slot is easy enough. Upon asking Twitter if I should test in single or dual channel, the answer I got was ‘test both, but if single is a lot worse, gut the person selling the machine’. It’s always a fun day when someone’s stupid mistake doubles your workload! So for this quick test, I’m going to take it from the view point of a single channel machine. Just because some idiot putting together the machine doesn’t know how memory works. Mind you, for $10 of hardware, should I have expected anything less? 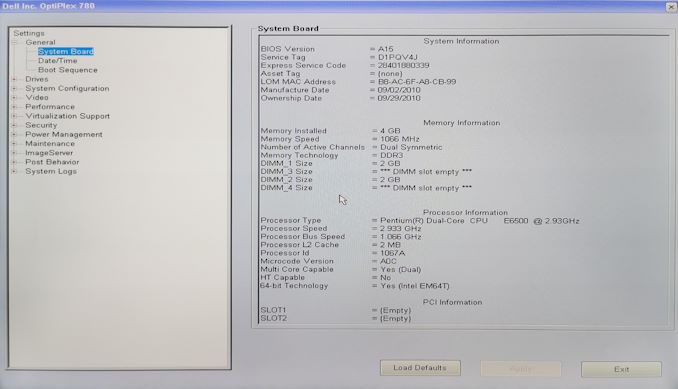 Just to prove it can be in DC mode

Upon getting the machine, it booted straight into Windows. Someone had clearly been through the install procedure already, and it gave me Windows 10 Pro 1903 with a standard desktop and we were ready to go. 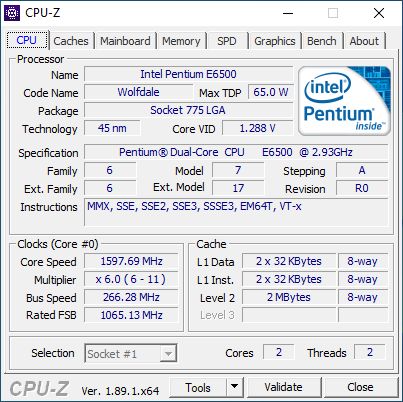 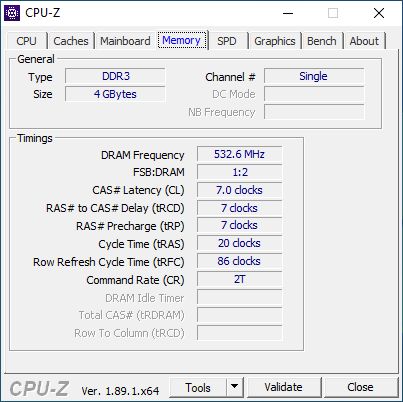 Because this is just a quick test, and I’m on the road for two weeks the day after the unit arrived, we only had time for a small number of tests to gauge the performance. For the cost of this system, what I really should be comparing it against is a tablet, but the nearest modern thing we have are the cheapest Atoms or Athlon APUs.

So we start with the benchmarks that everyone recognizes: CineBench.

For CineBench R15, we actually have a long history of data. If you ignore the fact that some of these were done on Windows 7 or Windows 10, we could compare it to Intel’s final ever single core desktop processor, the Celeron G465 on Sandy Bridge, or one of AMD’s low end A-series APUs built for AM4, the A6-9500, which uses an Excavator design with one module but two threads.

So perhaps surprisingly, moving to dual channel in CB R15 gave us some ST performance, but not any more MT performance. For ST and MT this E6500 is ahead of the single core 1.9 GHz Sandy Bridge, but even slightly newer Pentiums can easily go above and beyond.

CB20 is one of our newest benchmarks, built on a design that is meant to scale better as core counts are going up to 32 and 64 cores per CPU. Unfortunately we’ve only been running this test for a short while, so only a few of our CPUs have any data. We can still pick from the dual core Celeron G3950 (Kaby Lake), and AMD’s 15W FX-8800P from the Biostar SFF motherboard launched earlier this year.

This time around moving to dual channel gives a sizeable MT benefit, whereas ST didn’t move much at all. AMD’s 15W Excavator CPU gives better performance here, but it is a much newer processor.

One of our popular tests in the latest suite is our test that probes how long it takes to load the image editing software GIMP. For this test we use the post-first-load time, which already has some things cached, and then run it over 10 successive trials. Fast modern day processors can do the job in just over three seconds, however this test shows its teeth with the slower end of the spectrum.

Compared to the Sandy Bridge single core G465, the E6500 actually does better here with two cores. It even makes it faster than Intel’s best mobile excavator parts, and the dual channel result is better than an AM4 processor. Modern CPUs, even the Ryzen 5 1400, are somewhat better.

With this system having Intel GMA4500 graphics, it was relatively hard to decide what to test. It does support DirectX 9.0, but anything mildly strenuous is going to make this system crying for mercy. In that regard, we went back to an old staple: Counter Strike Source. The Source engine allows for timedemo playback, although this is more a CPU test than a graphics test: the engine attempts to playback the timedemo as fast as possible, which is often at a slightly faster framerate than the actual gameplay during the recording.

For our test we took a 72 second round of de_dust2 with 30 extreme difficulty bots as our playback, and ran it at various resolutions. The settings were for low resolution models, low resolution textures, low shaders, medium shadows, no AA, with multi-core rendering enabled.

The only comparison point I have for this test is the Core i7-8565U that I am currently using as my work laptop, which has Intel UHD620 Graphics. 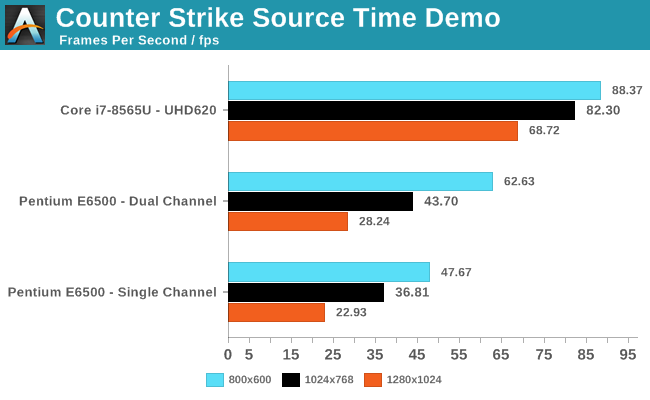 CS:S is known for having lots of low poly tweaks which could be applied on top of these to get higher frame rates, but I’m surprised at just how smooth the E6500 was at low resolution gameplay. It’s just a darned shame that the people who shipped this PC only put it in single channel mode – the gains at 800x600 were above 30%, just by physically moving a memory module!

Sure, this PC by most metrics is a pile of trash: a dual core 2009 processor, a mechanical hard drive, and memory in the wrong holes. But for $60, with a full blown copy of Windows 10 Pro? It’s a treasure. Attach a monitor, keyboard, mouse, network cable/USB Wi-Fi, and you are golden.

One of Anand’s quotes that I like bringing up is the one where he said ‘there are no bad products, only bad prices’. This Dell Optiplex 780, in the Black Friday sale for $60, was a good price. Just as long as you change that memory stick to dual channel.

Now that the sales are over, this system is back to it's full price. Any sales widgets below will be of different systems.