While AMD’s focus with the launch of their Radeon RX 5000 series “Navi” product stack has been on midrange desktop cards – and rightfully so – it’s not the only market AMD serves. For as much as the company gets to set their own cadence in hardware design cycles, when it comes to hardware release cycles the company still needs to move to the beat of their single biggest customers: the OEMs. And with the OEMs being driven by market trends and seasonal, cyclical matters, OEMs have historically asked for new hardware between actual design cycles.

To that end, today AMD has quietly announced a new generation of products (of sorts), the Radeon 600 series. Aimed at the low-end of the market – and primarily laptops at that – the Radeon 600 parts are a pure rebadge of AMD’s existing 500 series parts, and are designed to flesh out the very bottom of AMD’s product stack. As is typical for low-end parts, these entries are based on a mix of existing AMD GPUs, using Polaris 12/23, GCN 3 “Topaz”, and GCN 1 “Oland” GPUs depending on the performance class.

Overall, this segment of the market is at the very tail end of AMD’s product stack. So low, in fact, that this is the segment where AMD doesn’t even produce new GPUs, as this is where higher-end integrated GPUs take over and the demand isn’t there for super small discrete GPUs. Hence the hodge-podge mix of GPUs; it’s essentially a collection of AMD’s lowest-end GPUs from a few generations, for the specific customers that need them.

As for the rebadging, this is a semi-annual event driven by OEM product cycles. In short, with the shorter product cycles of OEM systems versus retail channel video cards, OEMs want to advertise the latest components when they refresh and update their systems, even when new GPUs are not available. To which NVIDIA and AMD rebrand, refresh, or otherwise re-designate existing SKUs as new OEM-exclusive parts.

Looking at the parts themselves, there’s not a ton to say here. At the top of the new Radeon 600 series is the Radeon RX 640, which is the only part to get an RX designation. Based on the specs, this would be a Polaris 12/23 part, which is AMD’s smallest GCN 4 GPU. The specs are line-for-line identical to the Radeon 550X, so AMD has not made any changes here. Overall, this part uses cut-down versions of the underlying Polaris GPU, with a mix of 8 CU and 10 CU versions. More notably, half of the memory bus has been lopped off, leaving just a 64-bit memory bus that’s running 7Gbps GDDR5.

Below the Radeon RX 640 is the Radeon 630. This appears to be another Polaris 12/23 part, this time recycling the Radeon 540X. Relative to the fastest part in the stack, this only comes with 8 CUs, and half of the ROPs have been disabled, leaving 8. Memory bandwidth has also been cut down a bit as well, dropping down to 6Gbps. 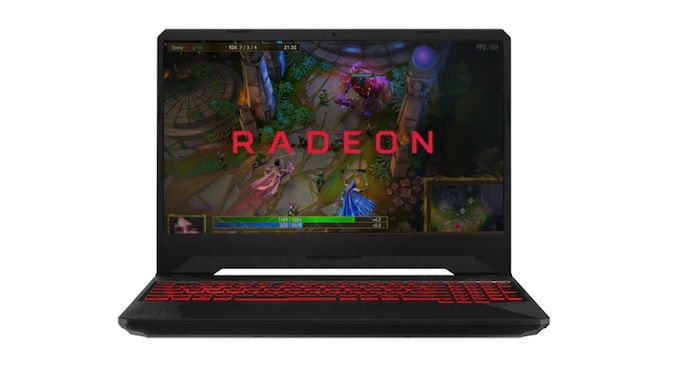 Past this, we have the Radeon 625, Radeon 620, and Radeon 610. While AMD’s website currently lists these are all being GCN 4 parts, the specifications are actually a perfect match for the Radeon 535, 530, and 520 respectively. Which is to say we’re looking at GCN 3 “Topaz” for the first two parts, and, refusing to die, GCN 1 “Oland” for the Radeon 610. These parts come with 6 or fewer CUs, with maximum clockspeeds at 1030Mhz or lower. Depending on the part, these come with 4.5Gbps GDDR5, or DDR3. Notably, none of the parts here have video decoders; they are meant to be entry-level parts for improving GPU performance in laptops, relying on the integrated GPU for video duties.

Overall, the release of the Radeon 600 appears to be timed to coincide with the launch of Intel’s 10th generation Core CPUs, which will begin showing up in laptops in September. While I don’t expect we’ll see these AMD parts paired with Intel’s latest wares – which tend towards the high-end – the launch of the 10th gen Core series is triggering a complete cascade of laptop family refreshes as the OEMs redo their product stacks. To that end, while AMD’s share of the laptop GPU market is relatively small, they still remain a common sight thanks to Radeon parts such as these.