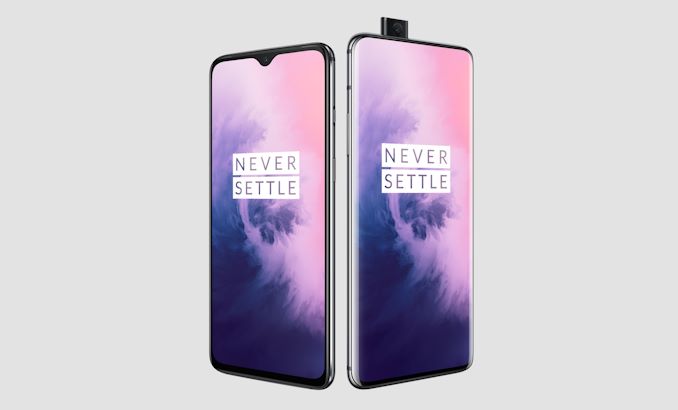 We’ve been with OnePlus since the One back in 2014. Over the years we’ve seen the company’s products have a large impact on the industry and particularly with the enthusiast community, delivering extremely solid products at extremely competitive price-points. Although most users will view the company’s smartphones as products focusing on delivering value, the truth is that over the years as OnePlus iterated with every new generation, it moved up in terms of both product quality as well as pricing.

This upwards shift in quality has been especially visible last year in the OnePlus 6. The phone was a major iteration for the company and the new design language as well as industrial design really stepped things up. Both the OnePlus 6 and 6T refresh ended up as among the best devices in 2018.

Going over the core specifications of both new phones:

Naturally, being 2019 devices, we find both the new OnePlus 7 as well as One Plus 7 Pro using Qualcomm’s newest Snapdragon 855 SoC. We’ve extensively reviewed the chip in our review of the Galaxy S10 and dwelled deep into its characteristics. Fair to say, the chip impressed a lot, and we expect to provide the new OnePlus 7 phones with excellent experiences.

The OnePlus 7 comes in 6 and 8GB RAM variants, while the OnePlus 7 Pro comes in 8GB and 12GB variations. Both devices are the very first commercial devices to come with UFS 3.0 NAND storage. Although Samsung’s Galaxy Fold was the first to be announced with the new storage generation, OnePlus will seemingly beat Samsung towards actually shipping phones. The new storage solution doubles the interface bandwidth, increasing the theoretical maximum throughput from 800MB/s to 1600MB/s as well as increasing the peak IOPS, which hopefully should be something that’s noticed in application launch speeds. OnePlus continues to iterate on its RAM-Boost feature: Pre-loading frequently used application data files into DRAM in order to accelerate launch speeds. 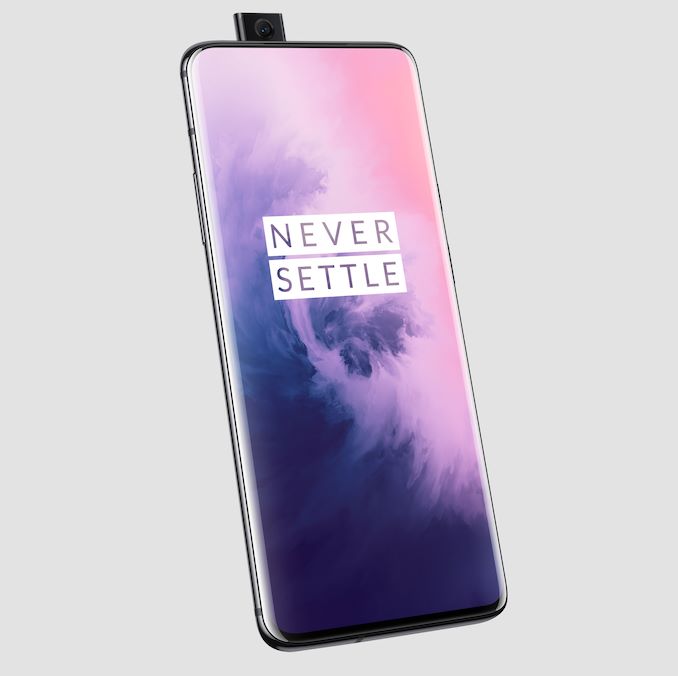 The OnePlus 7 Pro is characterised and distinguishes itself by one thing: its display. For the new ultra-premium phone, OnePlus did not hold back in terms sourcing the very best. The new panel seemingly uses the same generation technology as employed by Samsung in the Galaxy S10. Here we see a 6.67” AMOLED display with a 3120 x 1440 resolution and a resulting 19.5:9 aspect ratio. OnePlus promises the display will reach up to 800nits brightness at 100% APL, and has a new ultra-low brightness mode which goes down to only 0.27nits, far below any other smartphone on the market. 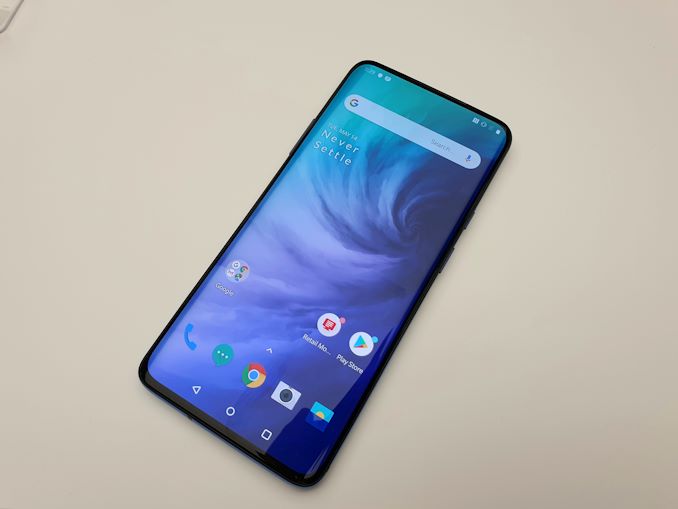 The one thing that really distinguishes the OnePlus 7 Pro from the Samsung competition though is the inclusion of a 90Hz refresh rate. This isn’t the first 90Hz phone or even 90Hz OLED phone for that matter, however it is the first 1440p 90Hz device out there. This is extremely interesting as 1440p60 is the limit that a single MIPI interface with DSC (Display stream compression) can drive. Thus the One Plus 7 Pro must come with dual-MIPI display interfaces. Depending on how OnePlus, Qualcomm and Samsung (Display DDIC) were able to implement this, it might have notable impact on battery life of the phone, similar to what we’ve seen on Huawei’s Mate 20 Pro. Interestingly, OnePlus offers the option to also drive the display at 60Hz, which is quite curious if the 90Hz mode indeed were to have a battery impact.

In my hands-on with the device, the 90Hz was immediately visible and vastly improved the fluidity of the phone. If OnePlus has managed to implement this without major battery regressions, then I think it represents a major selling point of the phone and the OnePlus 7 Pro should easily distinguish itself from other 2019 devices just on this one feature.

The display also promises to have excellent display calibrations adhering to sRGB and Display P3 standards. What is interesting is that OnePlus seemingly is continuing to use classical display profiles, however the new phones also appear to have colour management support in one of the display modes, titled “ICC Colour Profile”.

Not immediately visible but lying under the display is a new generation optical under-screen fingerprint sensor. OnePlus advertises the unit to be able to unlock in 0.27s, twice as fast as the 6T, and the sensor size has also doubled to enable for a better unlock experience. 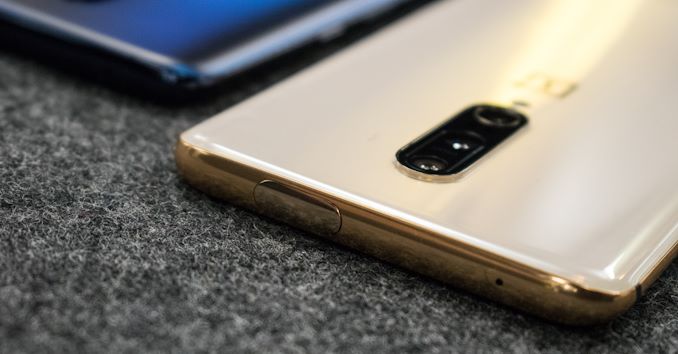 Obviously enough, the OnePlus 7 Pro is able to achieve a full-screen experience without any obvious bezels, notches or screen cut-outs thanks to the use of a pop-up camera module. Here we see a similar mechanical mechanism as used on the Oppo Find X, but just narrowed down to a small part containing the front camera module. OnePlus says the module has been tested to up to 300,000, which ends up to 150 uses a day over 5 years. The units extends and retracts in 0.57s, which while isn’t enough to fully retract from a standing arm-height, will reduce risk of damage. Speaking of retracting, the phone does have a drop detection where the module will hide when in free-fall. 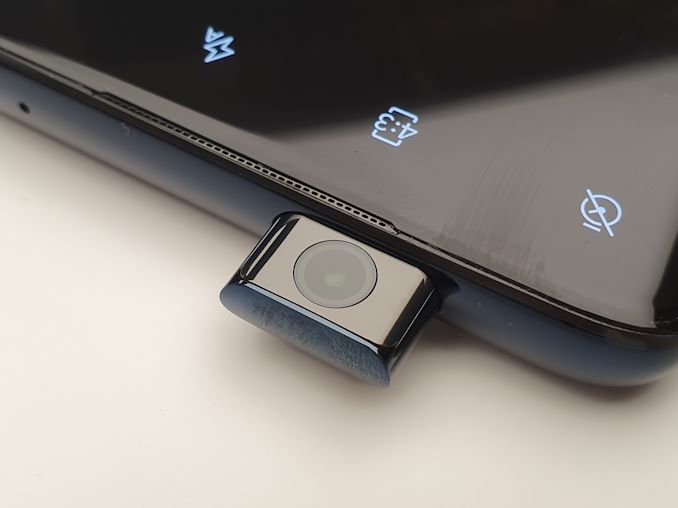 The camera sensor itself is a 16MP unit with an f/2.0 aperture lens with fixed focus and support 2D face unlocking. The same sensor is used on the OnePlus 7 front-facing camera.

Besides the new generation screen, the other big prime feature of the OnePlus 7 Pro is the new tri-camera setup. OnePlus continues with a vertical camera module arrangement, and the OP7Pro adds a third module, although the second one is also a difference to its predecessor. 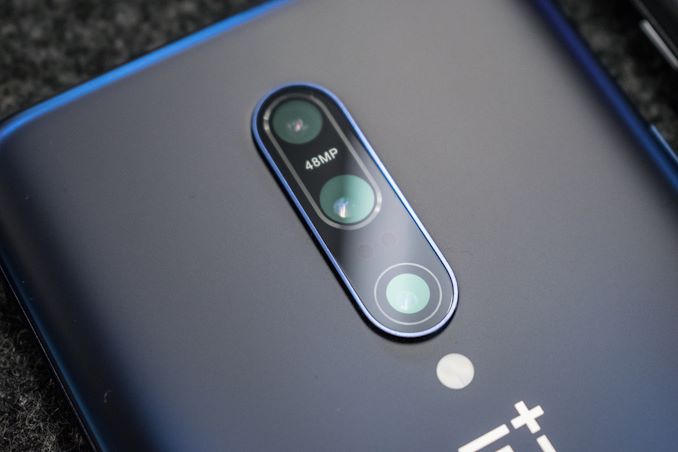 The main camera sensor is the new popular IMX586 which has been now announced to be used by a slew of different vendors, with OnePlus being the latest addition to the gang. The new sensor is characterised by being a 48MP unit in a ½” form-factor which results in 0.8µm pixels. Unlike Huawei or Honor’s usage of these high-megapixel sensors, OnePlus is a lot more straightforward with the marketing and envisioned usage of the new sensor: Its primary use-case is in the 12MP 4:1 pixel binning mode which increases the effective pixel size to 1.6µm. Here OnePlus make use of the sensor’s ability for each individual pixel in the 4:1 bin to use a different exposure, recombined in a higher dynamic range result which the company calls HDR+. We’ve tested the sensor in the Honor View20 in January with good results, however we expect different results in the OnePlus 7’s thanks to the different processing of both the Snapdragon 855 as well as OnePlus’ algorithms.

OnePlus configures the OnePlus 7 main camera with an f/1.7 aperture lens, while the Pro version gets a wider f/1.6 setup. Both units support OIS which is a key feature for low-light as well as video recording. It’s to be noted that because of the large sensor size, large optics aperture as well as the OIS that the thickness of the camera has grown, and it protrudes more than in the OnePlus 6 or 6T, although I didn’t find it an issue. Another difference in the camera setup between the two phones is that the Pro variant adds a laser autofocus module which isn’t found on the regular OP7.

The secondary camera on the OnePlus 7 Pro is a new 8MP 1.0µm telephoto module with an f/2.4 lens with 3x optical magnification as well as OIS. The regular OnePlus 7 doesn’t feature this module and instead we see a 5MP depth sensor for use in portrait mode shots.

Finally, the third camera on the OnePlus 7 Pro is a brand-new wide-angle lens. The unit has a 16MP sensor and an f/2.4 aperture lens with 117° wide viewing angle, falling in-between LG and Samsung in terms of how wide scene the module captures. Over the last year we’ve seen wide-angle lenses being extremely popularised among smartphone vendors, so OnePlus being able to check this off on the Pro is definitely a big win in terms of camera experience for the phone. 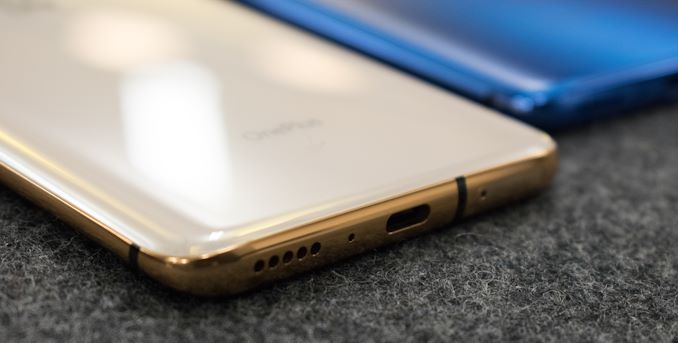 The phones come with USB-C 3.1 ports with HDMI output support. The headphone jack unfortunately seems to be gone for good, although the company didn’t really make use of the extra space on the previous generation 6T. On the OnePlus 7 Pro at least, OnePlus now promises a brand-new haptics module called a “4-axis” vibration motor which indeed vastly improves the haptics of the phone.

Both the Pro and the regular version have one much-awaited feature upgrade compared to its predecessors: stereo speakers. While I haven’t had sufficient time to test them out more thoroughly, the audio quality seemed like a major upgrade compared to the OnePlus 6/6T, and the addition of a larger stereo earpiece speaker definitely augments the listening experience and video viewing experience.

The battery of the OnePlus 7 comes in at 3700mAh, while the Pro comes with a 4000mAh unit. The regular variant loses 3g down to 182g total, however the OnePlus 7 Pro is quite heavy at 206g. The regular variant comes with 20W charging while the bigger Pro unit supports 30W charging. It’s to be noted that this a proprietary 5V charging standard which works at high amperage of 4 and 6A, meaning it requires special chargers as well as special cables. We hope the device also supports some kind of higher wattage USB-PD standard, but we haven’t had any confirmation on this yet. Wireless charging also is something that we unfortunately won’t be seeing this generation from OnePlus. 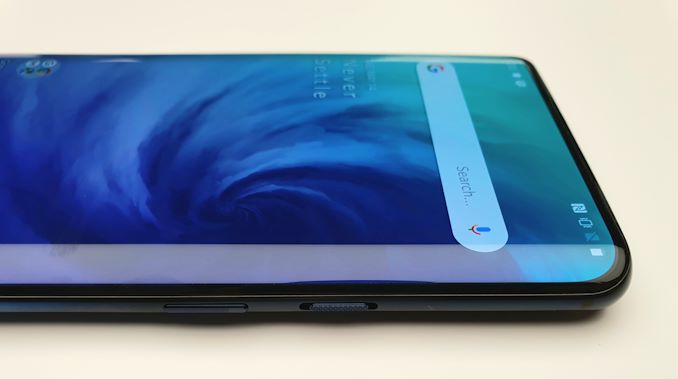 I was actually quite surprised at the heft of the Pro – the phone didn’t just feel quite heavy, but it’s also a quite large phone. At 75.9mm width it’s noticeably wider than existing “plus” sized phones out there. Here the phone’s more streamlined design with a curved screen as well as back panel definitely help with the ergonomics of the larger device. 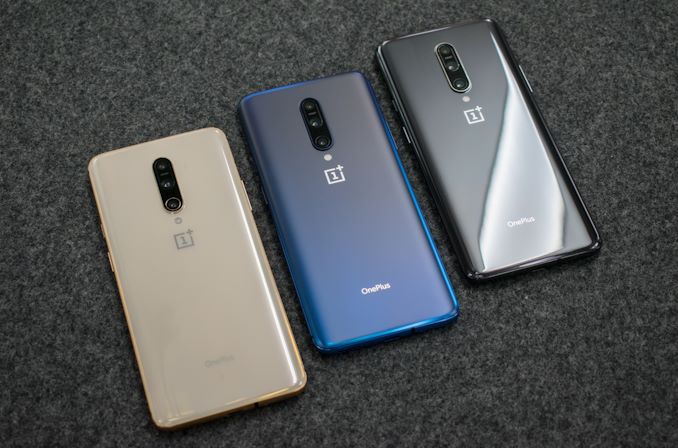 OnePlus offers the 7 Pro in “Almond” gold-ish glossy finish, “Mirror Gray”, and a chemically etched matte “Nebula Blue”. I’ve been a big fan of the etched glass finishes of the OnePlus 6 and 6T so this latter version definitely gets my vote.

The OnePlus 7: An updated 6T for the masses 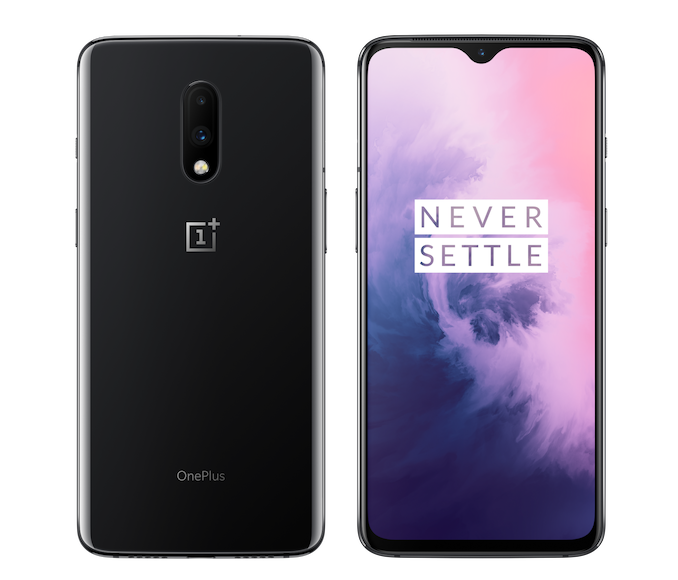 The display on the OnePlus 7 remains the same as on the OnePlus 6T: a 6.41” 2340 x 1080 AMOLED screen at 60Hz. Here we’re likely looking at the same display panel as found on the 6T, with the same teardrop notch camera design.

The OnePlus 7 shares the same main camera sensor as on the OP7Pro, however again only has a 5MP secondary depth sensor. What is actually great to see is that OnePlus did upgrade the earpiece to the newer generation more power earpiece speaker.

The OnePlus 7 Pro will be available in Mainland China, Hong Kong, India, the US & Canada, and all EU countries. Oddly enough, the regular OnePlus 7 will not be available in the US or Canada and customers in these regions will have to make do with the more premium Pro version.

Pricing will be updated in this article as soon as the launch event concludes.