Last year Intel unveiled a ’28-core’ processor aimed more towards enthusiasts and professionals rather than for servers. Despite the initial demo having a tenuous overclock and setup, we were given the specifications: 28 cores, running at a 3.1 GHz base frequency, a 4.3 GHz turbo frequency, a 255W official rated TDP, unlocked for overclocking, and ECC support for its six-channels of DDR4-2666. Pricing is still an unknown, and at the time Intel said it would be ready by the end of the year. That did not happen, but we still saw a couple of systems at CES which shows that it is close.

At the original demonstration in June 2018, we saw that both GIGABYTE and ASUS were the motherboard partners for this project. We got a good look at the GIGABYTE motherboard that was running the chip at that sky high 5.0 GHz, but it seems that the motherboard is still not ready for primetime, as no-one had it on display at CES, and it doesn’t even yet have a name. Instead we got an eyeful of ASUS’ Dominus Extreme in every W-3175X setup that was on display.

For users who have never heard of the Xeon W-3175X before, this new processor from Intel was somewhat of a surprise when it was first announced. It is Intel’s highest core count processor from its Skylake line of processors, and essentially a repurposed $10k server processor for the enthusiast/professional market. Intel has taken the silicon down to its Xeon W line, which is normally for workstation processors, but in this case they have also allowed the processor to be overclocked, the only Xeon W processor capable of doing so. Users have cried out for an unlocked version of Intel’s highest end server processors, and now this is it.

The new processor requires an LGA3647 motherboard, but as far as we are aware it will not work in any standard LGA3647 motherboard, but specifically either the ASUS Dominus Extreme or GIGABYTE’s yet unnamed product. Intel guarantees a TDP of 255W for the base frequency of 3.0 GHz (see our post here as to why TDP only refers to base frequency), and a turbo frequency of 4.3 GHz. At this time we do not know the turbo profile of the processor, however we expect it to draw more than 255W at its peak. When overclocked, expect it to draw a lot more. For context, Intel’s 28-core 5.0 GHz demo was using a 1600W power supply and an 1800W water chiller to keep the processor cool.

At ASUS, With G.Skill Royal Memory

The color of gaming is red, and so ASUS ROG build using the Dominus Extreme was a system decked out in full red. The liquid cooling loop was red. The LEDs on the system were red. Even the memory, from G.Skill’s recently released Royal line, was red. Normally red in the animal kingdom signifies danger, but for personal computers, it means gaming. 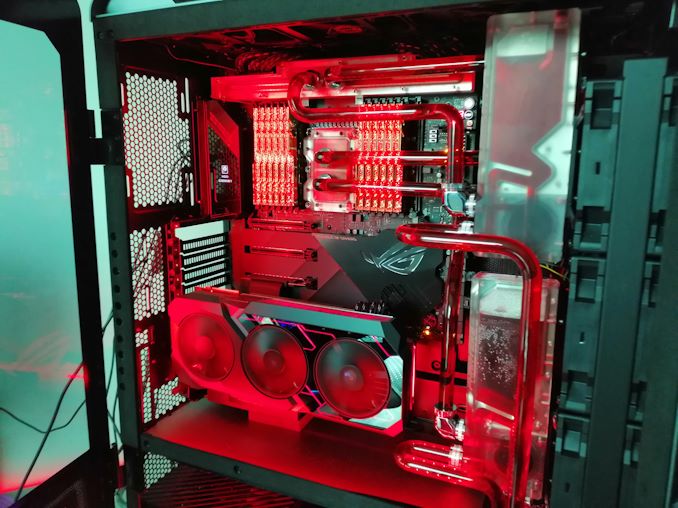 On the top is one of EKWB’s water blocks covering the 32-phase power delivery, and the full system is paired with ASUS’ new ROG Matrix Geforce RTX 2080 Ti graphics cards. For memory, we see 12 x 16 GB = 192 GB of DDR4, which is almost enough for almost everyone.

The system was powered on, but not connected to anything. It didn’t even have a HDD, as given by the POST code shown by the OLED display on the top of the IO cover. This means it got past the CPU POST section, so there was definitely a CPU in there.

At Digital Storm: The Corsa

Instead of going for red, Digital Storm showed its new Corsa platform in white. This means fan LEDs in white, liquid cooling tinted white with white LEDs, and silver tipped memory to reflect the white. Inside the system we saw six Corsair Dominator DDR memory modules, and something in the special NVMe slot that ASUS uses on its motherboards. The system also had two RTX 2080 Ti graphics cards inside, both water cooled. 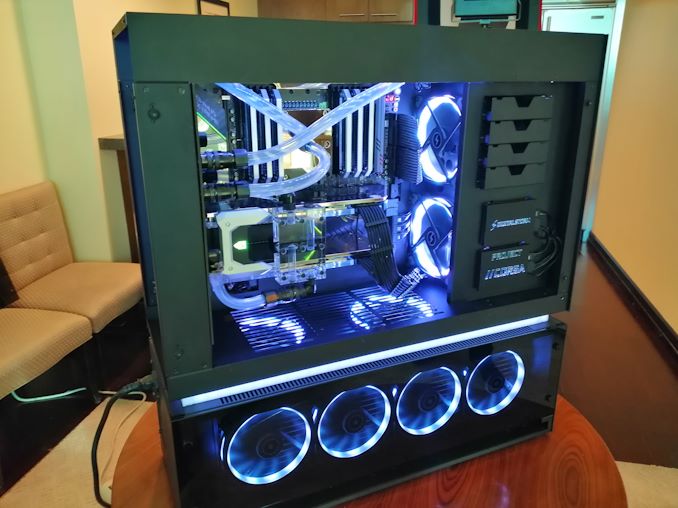 There is a total of sixteen 120mm fans here, with plenty of cooling focused into the radiator and pumps at the rear, but a solid airflow for the full system nonetheless. At the top we also see EKWB’s waterblock for the VRM. 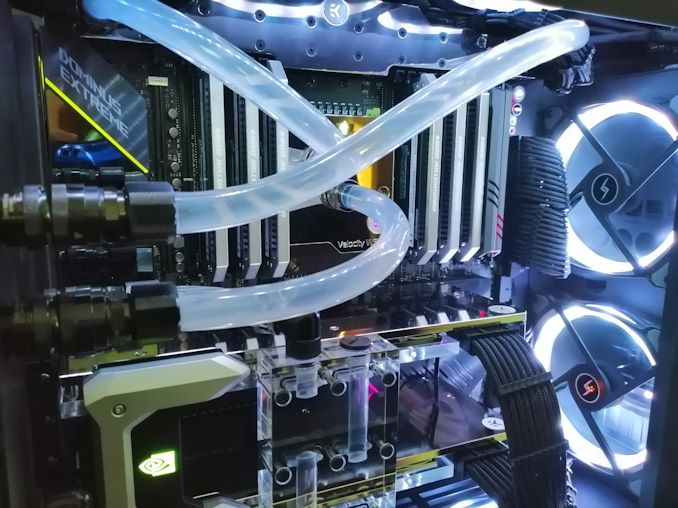 Digital Storm told us that this specification of system will be around the $20k mark, however the Corsa will sell with a variety of platform options, ranging from $6k for the entry model up to $50k with maximum everything plus custom color options and decals for the case etc.

This time we’re seeing a system go green. Phanteks’ setup was more to show off its chassis than the system, which is understandable given that Phanteks wants to sell you a case. Inside was a custom liquid cooling loop using Phanteks’ own CPU block, VRM cooling, and radiator/pump combination. 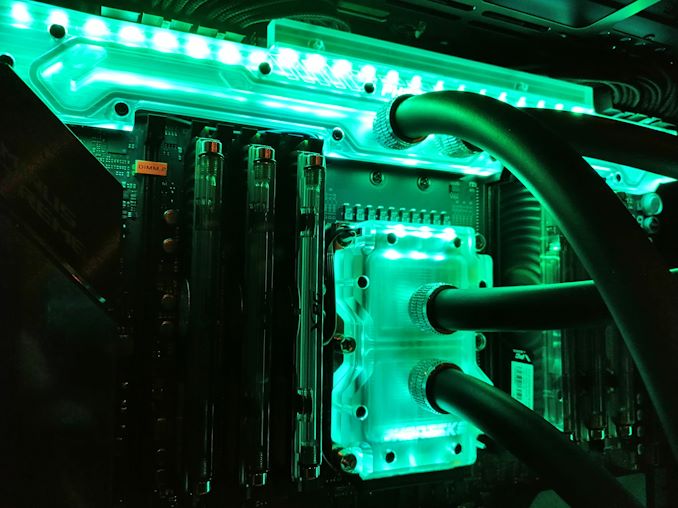 Phanteks was also keen to show that this system supports multiple power supplies, and its Revolt Pro line which can join multiple power supplies together to give sufficient power as well as required connectors. The ASUS motherboard has two 24-pin connections, one for extra overclocking, to which Phanteks states that they have the ideal hardware for such a setup. 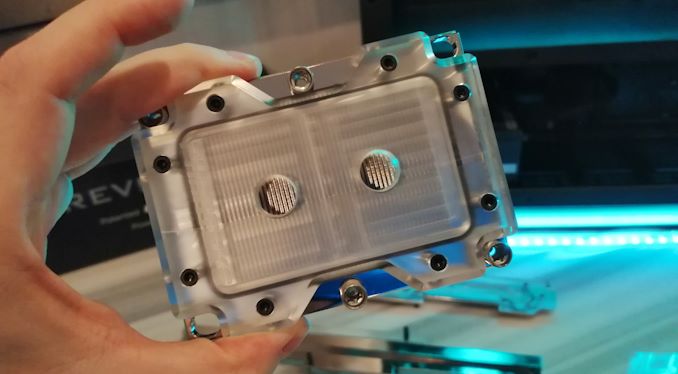 Intel said that the W-3175X would be available in Q4 2018, which has passed and gone. We’re being told that the product is still coming, with both Intel and ASUS looking to iron out wrinkles before bringing it to market. We have been told that the chip will be sold on its own at retail, however the preferred method of purchasing will be through custom builds from system integrators, such as the Digital Storm Corsa seen above. GIGABYTE is still working on their motherboard, which does not yet have a name.

We’re looking forward to seeing how Intel will distribute the platform and how it performs.