Despite having officially launched back in July, Intel’s Xeon E desktop platform has yet to see the light of day in systems casually available to users or small businesses. This should change today, with the official embargo lift for reviews on the parts, as well as the announcement today that SGX-enabled versions are coming for Server use. The Xeon E platform is the replacement for what used to be called the E3-1200 family, using Intel’s new nomenclature, and these parts are based on Intel’s Coffee Lake (not Coffee Lake Refresh) microarchitecture. We managed to get a few processors in to test, and today we’ll start by examining most of the six-core family.

Ever since the launch of Intel’s Xeon Scalable platform naming scheme, most of the Xeon product stack has gone through a naming scheme transformation. The E5 and E7 families were rolled into the Xeon Scalable line with names like Platinum, Gold, Silver, and Bronze, while the workstation focused Xeon E5-1600 parts are now called Xeon W. With that in mind, Intel also changed the Xeon E3-1200 family, into Xeon E, with E being for Entry.

The target market for these processors is still the same: ECC enabled versions of consumer Core family parts, with slightly different base frequencies, turbos, pricing, and TDP values. Users who follow the Xeon E product line will have noticed that some of the processors in this family have the integrated graphics disabled, but also the pricing structure is often a notch above the consumer parts.

Despite the fact that the consumer product line recently launched the 9th Gen Core, known as ‘Coffee Lake Refresh’, the Xeon E-2100 family being reviewed today belongs to the non-refresh version of Coffee Lake. This is mostly down to the timing – the market that Xeon E is after often requires additional testing and qualification. It still doesn’t explain why the launch was in July but the performance embargo lift is today. But here we are.

As we reported back in July, Intel is coming out with a range of quad-core and six-core parts for Xeon E. Those labeled with ‘G’ at the end of the name will have integrated graphics.

Sitting at the top is the Xeon E-2186G, a six core processor with a TDP of 95W, a base frequency of 3.8 GHz, and a turbo frequency of 4.7 GHz. In the past, the top processor was often called the ‘E3-1285’, so the naming scheme follows. The top Xeon E/E3 bin was always an odd processor in general: for most of the previous generations, it offered a slight bump (often +100 MHz) over the second best bin, but the price increased by 40-60% to around $620. In this case we see that the E-2186G is indeed a 100 MHz increase in base frequency over the E-2176G, from 3.7 GHz to 3.8 GHz, although the price increase is a slightly more modest 24% increase this time. Well, there’s always more room at the top, should Intel ever decide to release 8-core variants.

The E-2186G is the only part listed with a TDP of 95W, while the rest are 80W for the six-core parts and 71W for the four-core parts. Every chip has hyperthreading, except for those with a third digit of ‘2’, such as the E-2126G, E-2124G, and E-2124. The processors with integrated graphics, the ‘G’ processors, are using the ‘Pro’ equivalent of the UHD 630 graphics we see on consumer Coffee Lake. In this instance, the iGPU is called UHD P630. Frequencies of the iGPUs, as well as DRAM frequencies, match the consumer parts as well.

Aside from the official parts listed, Intel also has two off-roadmap SKUs that we can find: the Xeon E-2106 and Xeon E-2104. These are not normally searchable on Intel’s database if we look at the ‘overall Xeon E family’ specifications, but users can find them by putting in the exact name into the search. These parts will be OEM only, and Intel often makes them with specific customers in mind.

If we do some direct comparisons with the consumer variants of the processors, we get the following:

In both cases the TDP listed for the consumer parts is higher - for the six cores with hyperthreading the rest of the spec is the same, but for the quad-core vs six core it comes with a difference in frequency as well. The consumer parts have overclocking, while the Xeon parts can use ECC memory. Pricing is also higher on the Xeon E parts, as they also support vPro.

When Intel launched the E3-1200 v5 family two generations back, the company made a conscious decision to split the interoperability between the consumer Core processors and the commercial Xeon E3 processors. This means that there are specific chipsets and motherboards for each, and users could no longer mix-and-match, at least as far as putting a Xeon E3 into a consumer 200-series motherboard. Instead, users had to look to the C-series chipset enabled motherboards to get them to work. Intel is carrying that policy over for the Xeon E family as well, which requires new motherboards compared to the E3-1200 v5/v6 generations.

For example, in our review today we are using one of Supermicro’s Xeon E motherboards, the X11SCA-W. This motherboard uses the C246 chipset, which is the commercial/enterprise version of the Z390 chipset without the overclocking and with ECC memory support. 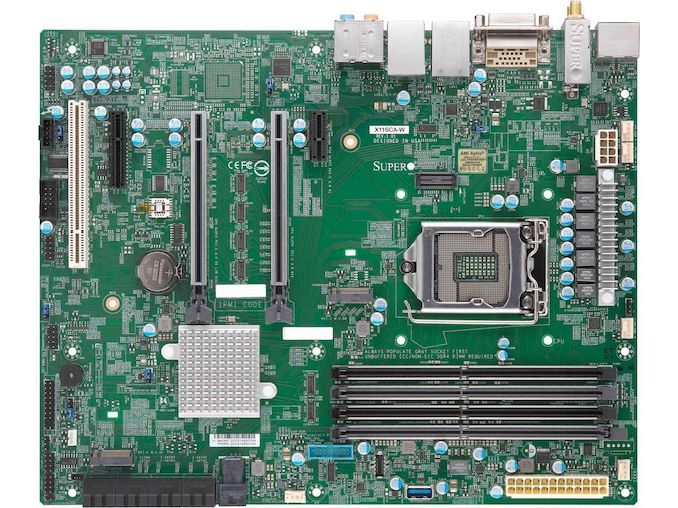 Because of this C246 requirement, there will be very few motherboards on the shelves for users that want to build their own Xeon E machine, as most of the primary motherboard manufacturers make one or two retail models and that’s about it. We’ve seen GIGABYTE and Supermicro show a single Xeon E motherboard at a trade show each, but for the others it is anyone’s guess.

Gavin Bonshor, our motherboard reviewer, will have a full review of the X11SCA-W ready in the next couple of weeks.

Intel’s Announcement Today, and This Review

Today Intel is officially announcing Xeon E for server customers. Up until this point it would seem that Intel was focusing more on professional desktop environments, but now the Xeon E platform is going to the datacenter. Intel is keen to point out that these parts for the server market support security features such as SGX.

For this review, we managed to obtain several of the processors in advance, several six-core and four-core units. Due to time constrains, we have only been able to test the six-core processors in our CPU benchmark suite so far, so we will follow up with another piece in a few weeks with the four-core variants. If we test them all, I’ll write a fresh article with the full analysis.

In the interest of disclosure, Intel did not sample any of the processors tested today. Intel contacted us about a week ago on sampling, and is set to sample us one of the parts we do not yet have, though it was not available in time for the embargo today. I’m on the lookout to borrow the others from our partners. Please get in touch if that could be you!

In this review, we are taking the E-2186G, the E-2176G, the E-2146G and the E-2136 through our workflow to gauge performance. The focus will be on the CPU metrics in the first few pages, however we are also including the gaming performance with a GTX 1080 as well as the integrated graphics performance. The main comparison points will be the equivalent consumer processors, and previous generation Xeon E3 processors that we could acquire.