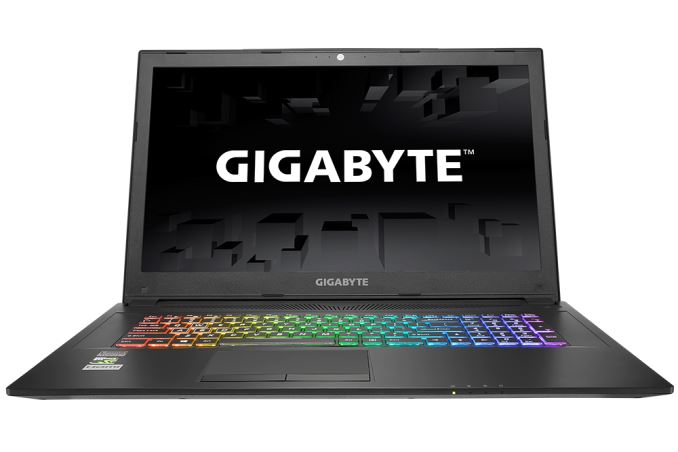 Typically when you think of GIGABYTE/AORUS, you think of laptops like the Aero 15X or X9. Beautiful, powerful laptops with budget-breaking prices. However, GIGABYTE is now trying to spread the PC gaming love to more people with its two newest gaming laptops, the Sabre 15 and Sabre 17. Starting at $1,299, these affordable notebooks will be launching just around the time you're sending the kiddies back to school.

Although they're GIGABYTE-branded, both Sabres look more like AORUS laptops, the company's enthusiast brand. Both notebooks have that sleek black, soft-touch chassis accented with a shiny silver GIGABYTE emblem at the top of the lid. The interior is also made with a black soft-touch finish and houses a backlit, island-style keyboard with 1920 x 1080 displays.

The laptops are loaded with ports, especially the Sabre 17. Although it was plugged into several things at the GIGABYTE booth, I saw a mini DisplayPort, HDMI, and several USB Type-C ports. That means this system is ready and able to support a VR headset like the HTC Vive, Vive Pro, and Oculus Rift or several monitors with a few cables.
GIGABYTE didn't divulge dimensions for either laptop, but the company is known for making some of the slimmest laptops on the market. So you shouldn't be surprised if you get some incredibly thin-and-light measurements. 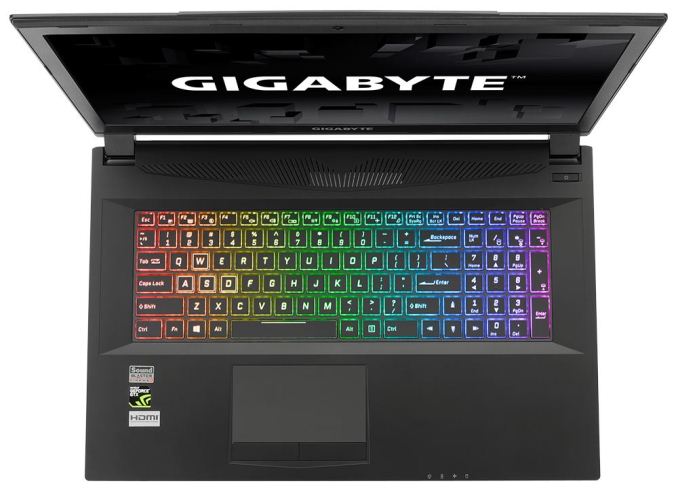 You're not going to get a mechanical keyboard in a gaming laptop for $1,299, but GIGABYTE also isn't going to shortchange you just because you're on a limited budget. Both Sabres will feature a customizable keyboard with 16.7 million color options with 2 millimeters of key travel. That's well above our 1.5mm minimum threshold. The keys are comfortable and very bouncy.

For so-called budget systems, the Sabres are pretty stacked with an 8th-Gen Intel Core i7-8750H processor, up to 32GB of RAM, a Nvidia GeForce GTX 1050 GPU with 4GB of VRAM and a dual storage system capable of supporting up to 3 TB worth of PCIe SSDs. The 1050 GPU pretty much limits you to gaming on mid-level settings, but it should still net you some respectable frame rates depending on the title.

Although $1,299 isn't what I'd call a budget system, the Sabres are downright bargains considering how expensive GIGABYTE and AORUS systems typically are. For the price, you can get a 15 or a 17-inch gaming laptop that can deliver relatively solid frames as well as multitask with the best of them and a great keyboard. If you're on a fixed budget, you might want to check out the Sabre come fall.