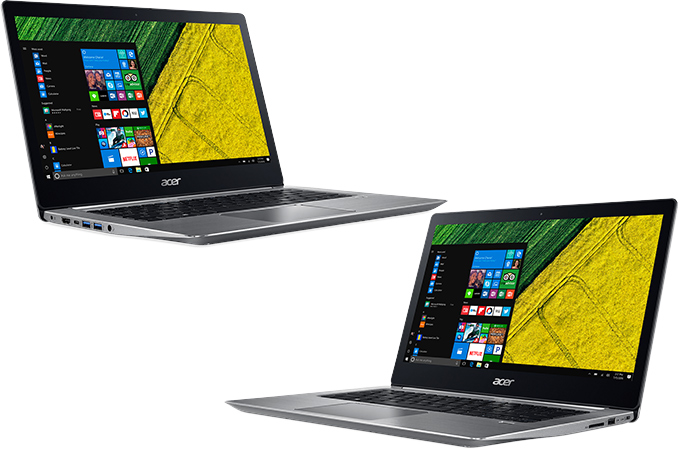 Back at the Ryzen Mobile launch, AMD announced three primary partners with three devices: the HP Envy x360, the Acer Swift 3, and the Lenovo Ideapad 720S. At the time, only HP had some information available, and has since pushed the Envy x360 to retail. The other two have been surprisingly quiet about their models, but today Acer steps up to the plate with lists and pricing. 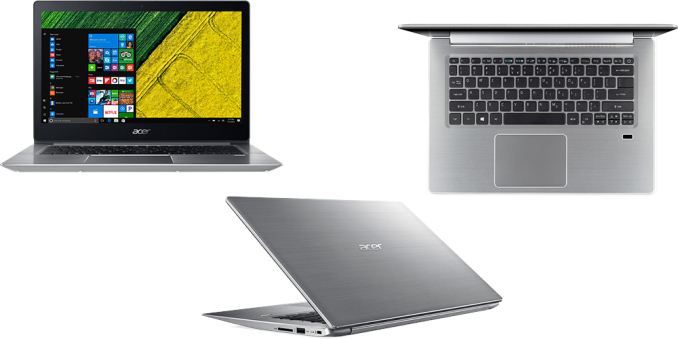 The new systems have 8 GB of DDR4 memory, and storage comes in at either a 256 GB SSD or a 512 GB SSD (no word if SATA or PCIe). For connectivity, the AMD-powered Swift 3 uses an 802.11ac Wi-Fi + Bluetooth module, three USB Type-A ports, one USB Type-C header, and an HDMI output. Finally, the notebooks are equipped with a backlit keyboard, a webcam, two speakers and a microphone. The Acer Swift 3 design is one of a typical workhorse notebook, for consumers who demand to have decent performance and portability but do not necessarily need a portable workstation or an ultrabook. Interestingly the specification sheets say that the battery is listed as 3340 mAh, which at 17.4 volts makes around 58 Wh, although the voltage of the battery is not specified.

Back at the Ryzen Mobile launch, AMD stated that the chassis for the Swift 3 was designed to dissipate 25W at maximum, so by putting a 15W APU in there, it allows for a higher XFR boost frequency, as well as boosting for longer. The launch article also listed the DRAM being in dual channel operation, up to DDR4-2133. Acer confirms neither of these points, but dual-channel would be a good choke point to alleviate for the graphics - the DDR4-2133 is below the DDR4-2400 that the Ryzen APU platform supports, however.

By today’s standards, the Ryzen Mobile-based Swift 3 units can hardly be called thin or light — the device weighs around 2.2 kilograms and is 1.87 cm thick. Acer could have lower the weight by choosing plastic over metal for the chassis, but at the cost of rigidity, look and overall user experience. Meanwhile, being ultraportable is not the purpose of the vast majority of 15.6” laptops anyway. To Acer’s credit, it’s worth pointing out that the Ryzen Mobile-based Swift 3 are slightly thinner (but a bit heavier) than HP’s Envy x360 featuring the same APUs. We currently have the Intel-based Swift 3 units in for testing, so this would be an interesting counterpoint.