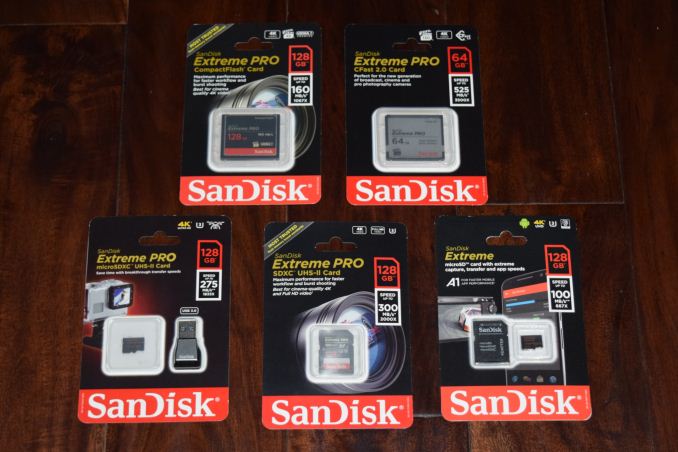 Digital cameras and camcorders employ memory cards (flash-based removable media) for storage of captured content. There are different varieties of memory cards catering to various performance levels. CompactFlash (CF) became popular in the late 90s, but, has now been overtaken by Secure Digital (SD) cards. Many computing systems (PCs as well as smartphones) also support SD cards for augmenting local storage capabilities. High-end recording systems with fast storage requirements use CFast and/or XQD cards. We recently started in-depth evaluation of the performance of various memory cards. SanDisk sent us a SDXC, two microSDXC, a CFast 2.0, and a CompactFlash card from their portfolio for review.

SanDisk / Western Digital is one of the very few flash product vendors who manufacture their own flash memory. They have a comprehensive flash product portfolio targeting the content creators market. Their portable external SSDs and high-performance thumb drives take care of the post-ingestion portable storage requirements, while their range of memory cards service the actual in-camera storage market. Lexar (which used to be a division of Micron) has memory cards for all formats currently in use - SD, microSD, CompactFlash (CF), CFast, and XQD. SanDisk targets all formats other than XQD.

Each of these five cards were subject to our comprehensive memory card evaluation routine. Readers will get an idea of the out-of-box performance as well as how the performance degrades after extensive usage.

The next four sections will detail the obtained performance numbers. Prior to that, we take a look at the testbed setup and evaluation methodology.