No stranger to the fray, ASRock is ready with the launch of two boards, the X399 Professional Gaming and X399 Taichi. Both boards share features but have enough differences to separate them in the product stack. The Pro Gaming adds 10 Gigabit Ethernet to its two Gigabit NICs and supports Creative Sound Blaster Cinema 3, while the Taichi aims to be a more mid-range board, by sticking with dual Gigabit NICs and uses Purity Sound 4. The styling is a little different too.

The high-end board from ASRock will be the Professional Gaming. It also carries the Fatal1ty name, due to ASRock’s never-ending association with a pro-gamer from the turn of the century. 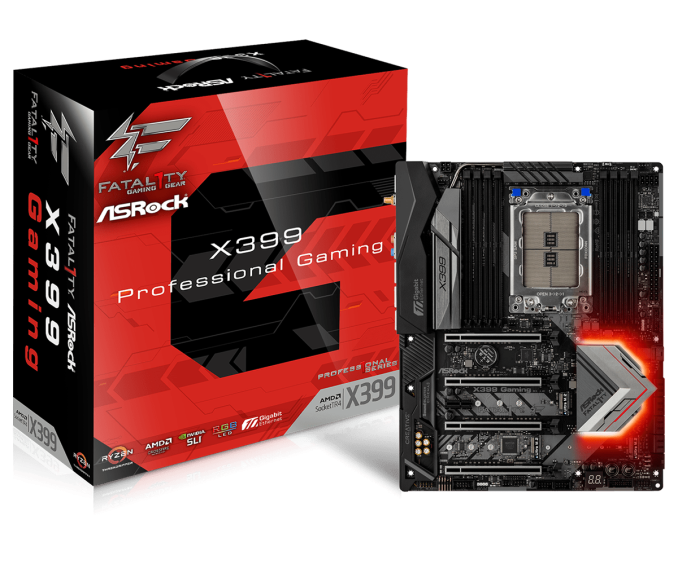 On the aesthetic side, the X399 Professional Gaming has a black PCB accented with gray heatsinks and grey stenciling where the M.2 slots are located. The memory slots are black, along with the rear IO cover that extends down the board. There are two heatsinks to cool the VRMs, connected by a heatpipe, and one reaches near to the rear IO. The chipset heatsink is not connected as part of the VRM cooling, but consumes a fairly large portion of the board and looks a bit like a play button. As with the fascination with RGB, the Professional Gaming has a few under the chipset heatsink. Users can add more RGB LEDs via two headers, and control them all through ASRock's RGB LED application.

The Professional Gaming has support for both NVIDIA 4-Way SLI and AMD 4-Way Crossfire with full-length PCIe slots. These have additional reinforcement to prevent sag or bending due to heavy PCIe cards during transit – the reinforcement is what ASRock calls its ‘Steel Armor’. The PCIe slots give an x16/x8/x16/x8 configuration from top to bottom, using 48 of the 60 PCIe lanes from the processor. The rest of the lanes are allocated to storage: there are a total of three M.2 PCIe 3.0 x4 slots, one of which is shared/switched with a U.2 connector. For other storage, there are eight SATA ports from the chipset that natively support RAID 0/1/10. 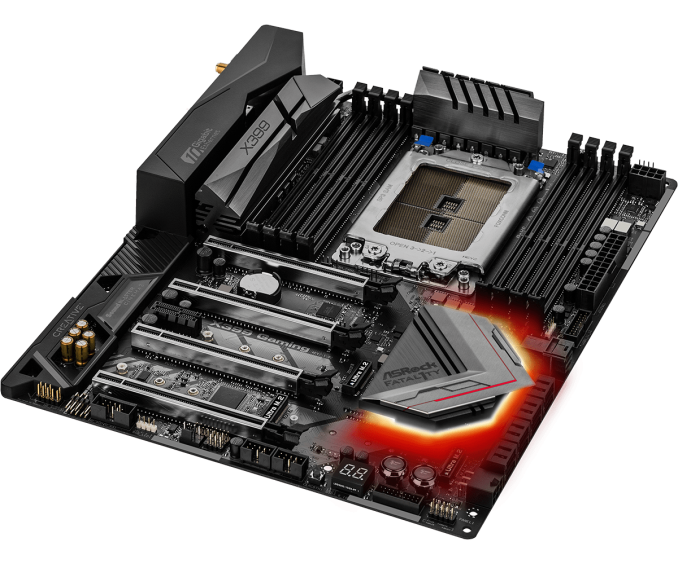 For added features, the X399 Professional Gaming jumps past the ever-present Gigabit Ethernet and uses an Aquantia AQC107 10 Gigabit LAN controller to appeal to users that want to invest in 10GbE. This is paired with two Intel I211AT network controllers, and all three can do regular gigabit Ethernet duties. If three Ethernet ports were not enough, also included is an integrated Intel AC8265 2x2 802.11a/b/g/n/ac WiFi module, to handle wireless duties.

ASRock provided chipset diagram for the Pro Gaming to show how it breaks down all the bandwidth: 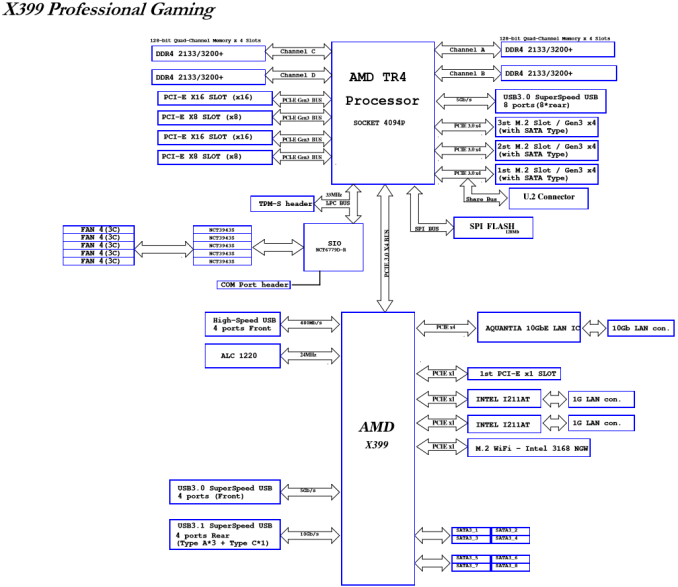 For power delivery, ASRock uses a digital 11 phase International Rectifier solution, along with IR DrMOS for monitoring VRM current and temperature. Distributing power to the VRMs are two EPS 12V connectors, an 8-pin and a 4-pin, although the system will work with only the 8-pin installed. Typically we see EPS connectors oriented close to each other at the top of the motherboard, but here the connectors are located on opposite sides of the socket. As shown above, the 8-pin is in the upper right-hand corner above the DIMM slots, while the supplemental 4-pin is in the more familiar location at the top left-hand corner. ASRock asserts this creates a wider trace for the CPU VRM, bringing better power delivery efficiency and lowering temperatures.