With the latest generation Kaby Lake Core i7-7920HQ CPU, up to 64 GB of DDR4, and RAID SSDs, the GT83VR Titan should offer some potent performance for work on the desktop. It would be nice if the SSDs were not in RAID, but this seems to be something that gaming laptops have migrated towards, for better or worse. The good thing here is that MSI isn’t using RAID to cover up lower cost SSDs. The review unit features two Samsung SM961 drives in RAID 0. 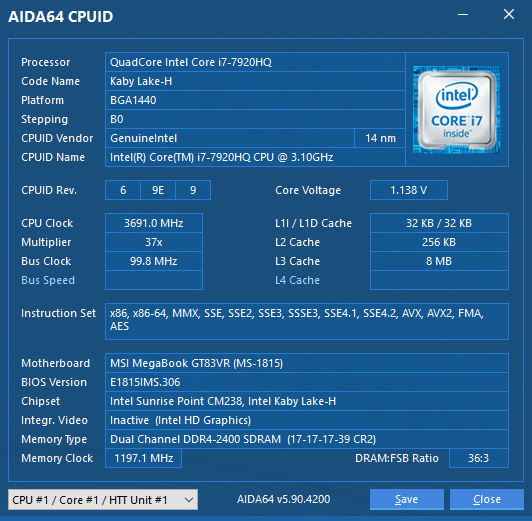 Unlike Clevo, MSI uses the H Series of Intel Core for their Desktop Replacement systems. The H series means up to 45-Watts of CPU TDP, and quad-cores. Clevo seems to be the only one going with Desktop class CPUs in their Desktop Replacement systems, so other than that, the Core i7-7920HQ should be the fastest model available in a laptop right now.

The GT83VR was run through our standard workload. For comparison, several other larger gaming systems have been selected for the graphs, but as always, you can use our Notebook Bench to compare any systems we’ve tested. 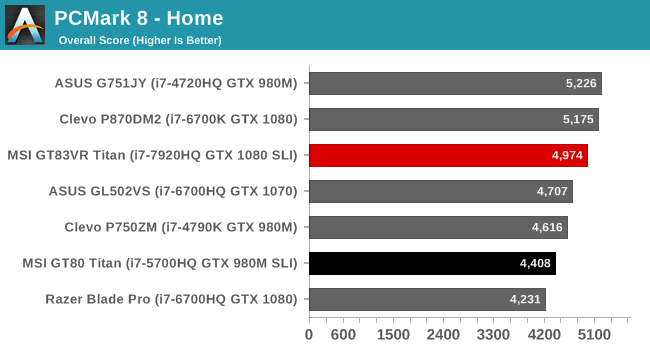 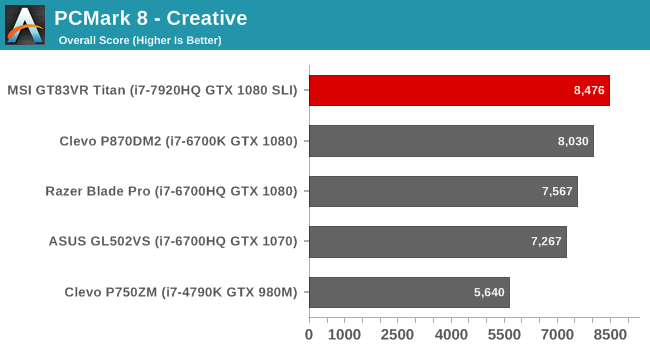 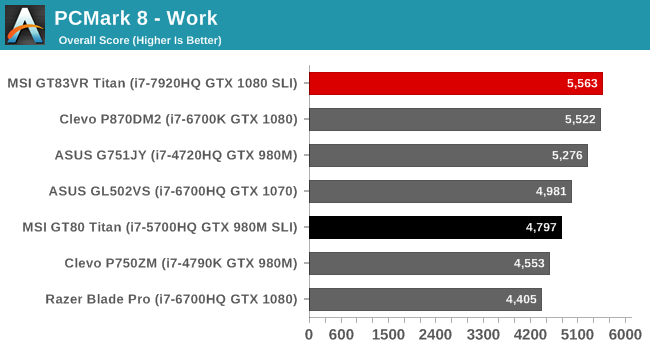 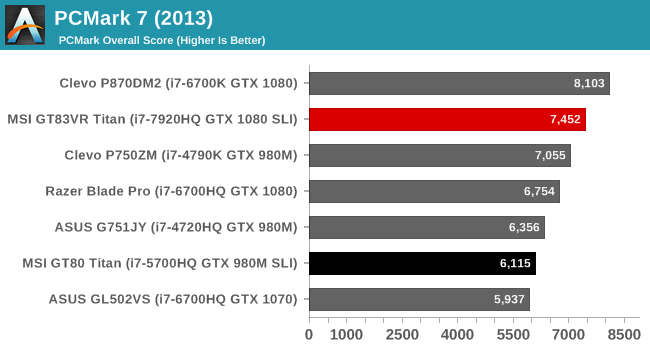 PCMark tests all aspects of a system, based on several sets of workloads which are meant to mimic real world tasks. Each of the sets of tests stress different parts of the system, but everything from the CPU, GPU, storage, and display, all play a part in the scores. The GT83VR does very well here, coming in close to the top against all systems. The Creative test is where the GPU plays the biggest impact, and that shows with the GT83VR outpacing even the Clevo P870DM2, although that system can be configured with SLI GTX 1080 as well, even though our review unit was a single card. 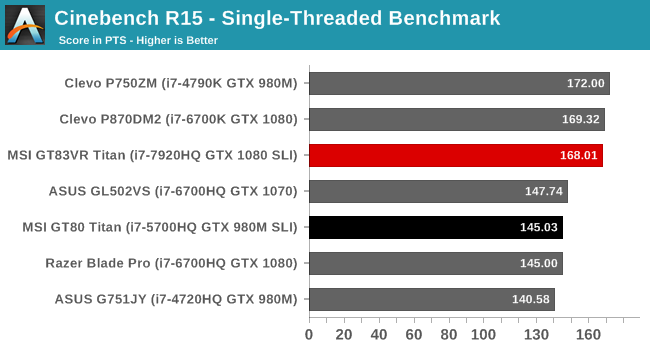 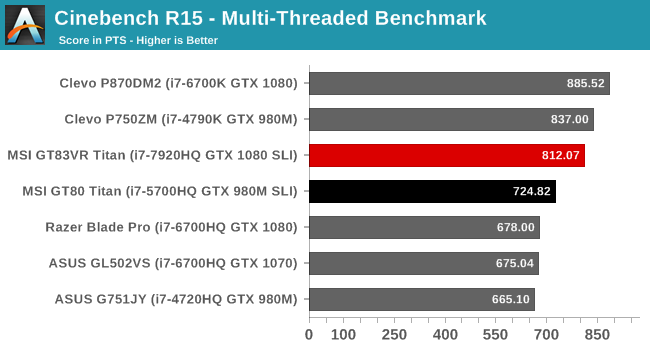 Cinebench is a CPU test, where more cores and higher frequencies is generally the path to the top here, but since you can set it to Single Threaded as well, it can be very useful at looking at single core performance. As you can see, there is a noticeable jump in performance from the Skylake i7-6700HQ and older CPUs to this top of the line Kaby Lake i7-7920HQ. It seems like most systems have been shipping with the i7-x700 model for the last couple of years, so it’s nice to see MSI step up on an expensive laptop like this, and the payoff is significant. On the multi-threaded results, the desktop class Clevo models with their higher TDP are able to stretch a bit of a gap here, but it’s not as large as you may think. 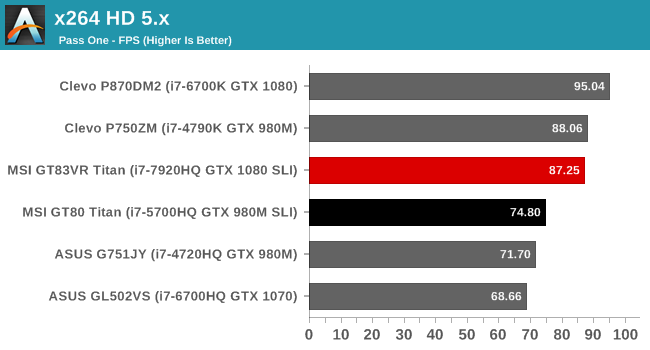 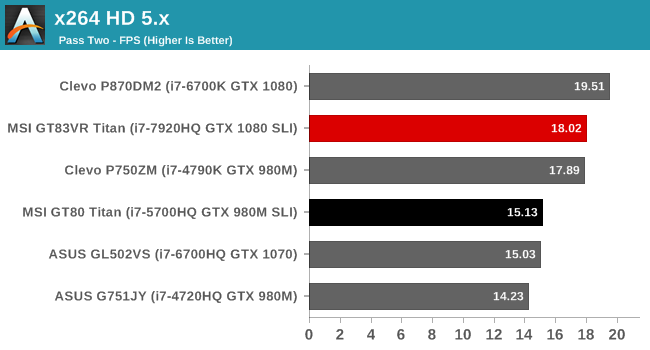 Much like Cinebench, this test is mostly CPU bound encoding, and once again the Kaby Lake does very well, being almost at par with the i7-4790K on this test. It’s an impressive jump over the older systems.

Web scores are important, but since they are heavily influenced by the underlying browser, over time, even the same system will likely be faster thanks to updates to the EcmaScript engines. That’s the case here as well, and prior to Windows 10, we generally tested with Chrome, but now we use Edge. 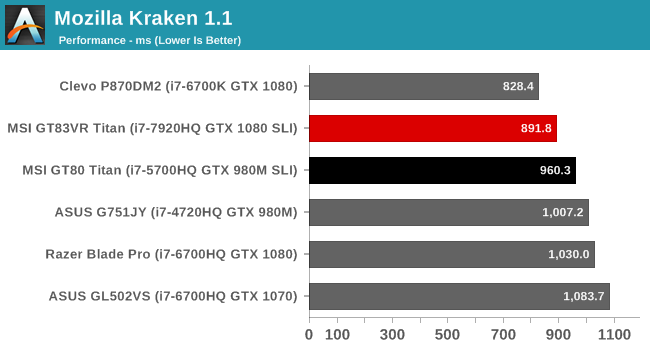 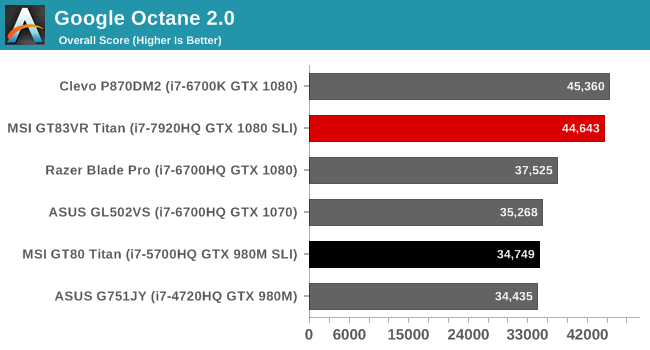 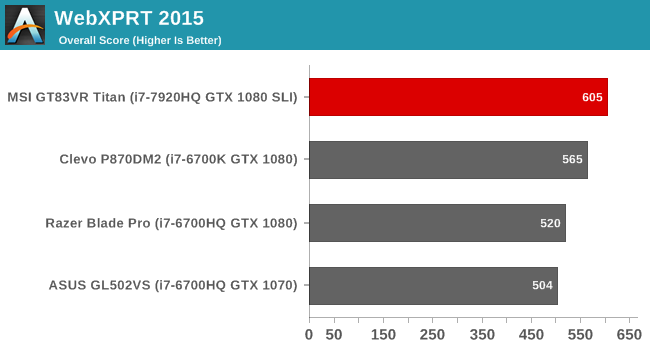 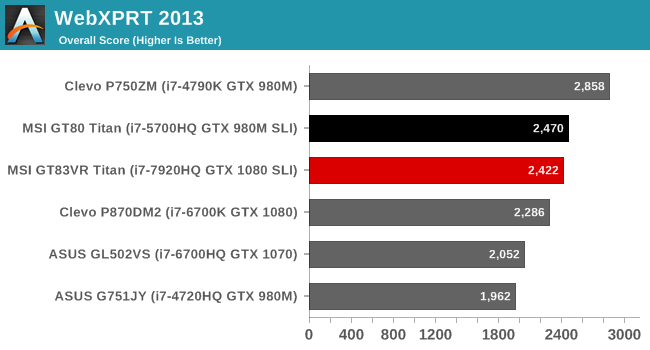 The MSI GT83VR should have no issues doing anything on the web, with plenty of performance available.

MSI ships the GT83VR Titan in a RAID 0 configuration, with two SSDs. This has become a bit of a trend with gaming systems, and it is really not necessary other than to check a box on a spec sheet. The overall cost of the storage is generally higher than using one larger SSD, and the chance for failure doubles with two drives.

The good thing here is that MSI has outfitted the GT83VR Titan with two Samsung SM961 SSDs, of 512 GB each, for 1 TB in RAID 0. These are the fastest SSDs on the market right now, and are based on MLC NAND, when most system use TLC versions like the PM961 or PM951. 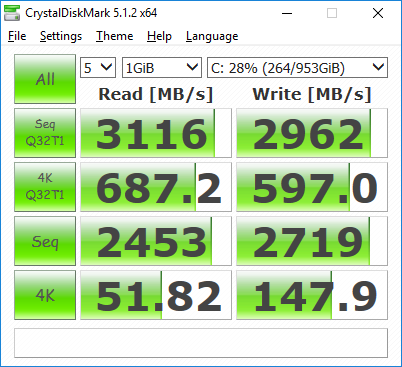 The sequential read and write speeds are very strong, and the 4K read and write scores are also helped by the MLC NAND. The SM961 is a beast, and putting two of them in RAID 0 results in high benchmark scores.

But don’t be too fooled by those results. RAID 0 has overhead as well, and it can negatively impact the performance. A perfect comparison would be a 1 TB Samsung SM961 drive in this system, but since we didn’t have that available, here are the results from a  1 TB Samsung PM961 (the PM is the lower performance TLC drive) that was put into a Razer Blade Pro. 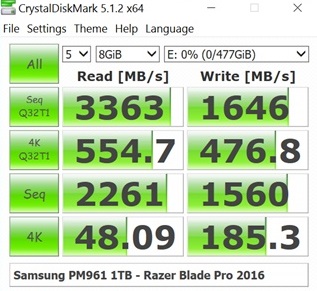 Sequential write speeds are impacted by the TLC NAND, but the sequential read is actually higher on the single drive, as well as 4K random writes at QD1. If this was a SM961, the write speed would also be improved. With SSDs this fast, RAID 0 isn’t really adding any value at all, and due to the extra cost and chance for failure, it’s a liability more than anything. It’s unlikely this practice will stop, but it would be nice if it did.