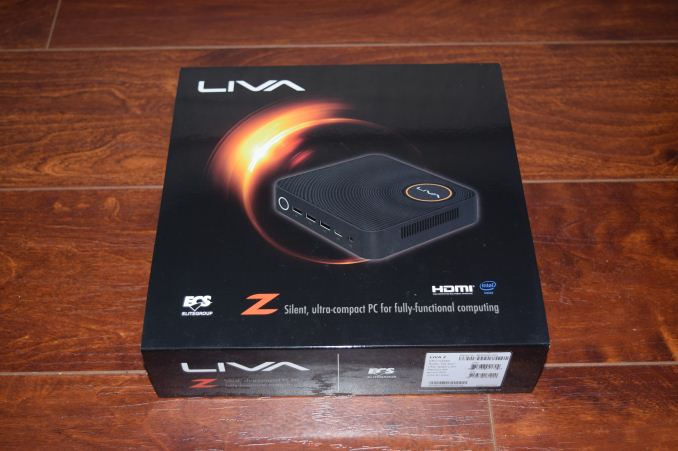 The market for UCFF (ultra-compact form factor) PCs has seen tremendous growth since the introduction of the Intel NUCs in early 2013. Various motherboard and system vendors have their own offerings in this space. ECS started selling their own UCFF PCs under the LIVA brand in 2014. The initial focus was on the low end, with units based on the Intel Bay Trail and Braswell platforms. The lineup evolved to accommodate Core M-based units as well as systems in the mini-STX form factor. Today, we are taking a look at the ECS LIVA Z. This fanless Apollo Lake system targets the low-end market segment, and aims to differentiate itself by supporting two LAN ports.

Traditional UCFF PCs (such as the BRIX from GIGABYTE and the Beebox from ASRock) have stayed close to the Intel NUC form factor. ECS had experimented with a smaller form factor (Mini-Lake) in the first-generation LIVA, as well as the LIVA X, and LIVA X2. The LIVA Z, however, adopts a board form-factor similar to that of the Intel NUCs.

The feature set and pricing of the LIVA units make it target the developing and cost-sensitive markets. The LIVA Z is no different. Intel's Apollo Lake SoCs improve upon Bay Trail and Braswell by adopting a newer microarchitecture (Goldmont) for the CPU cores and also getting fabricated in a more power-efficient / mature 14nm process. In the consumer market, the Goldmont cores are exclusive to the Apollo Lake family. The SoCs target the netbook and nettop markets, and it is no surprise that ECS has adopted the netbook variants for the fanless LIVA Z models.

The LIVA Z comes in three variants,corresponding to the three members of the Apollo Lake mobile SoC family (6W TDP) - the Pentium N4200, or the Celeron N3450, or the Celeron N3350. Our review sample, the LIVA-ZN33 is based on the Intel Celeron N3350. The unit ships with 32GB of eMMC on the board, but, it was insufficient to enable the installation of all our benchmark programs. Therefore, we evaluated the PC in two different configurations - the base one with Windows 10 installed on the eMMC and used for typical workloads such as media playback, and a configuration with a M.2 SATA SSD for office workloads. The full specifications of our review configurations are summarized in the table below.

The ECS LIVA-ZN33 package comes with a 65W (19V @ 3.42A) AC adapter and a VESA mount / screws in addition to the main unit. Windows 10 is the only officially supported OS, and all the drivers were downloaded on our review unit from the ECS website. 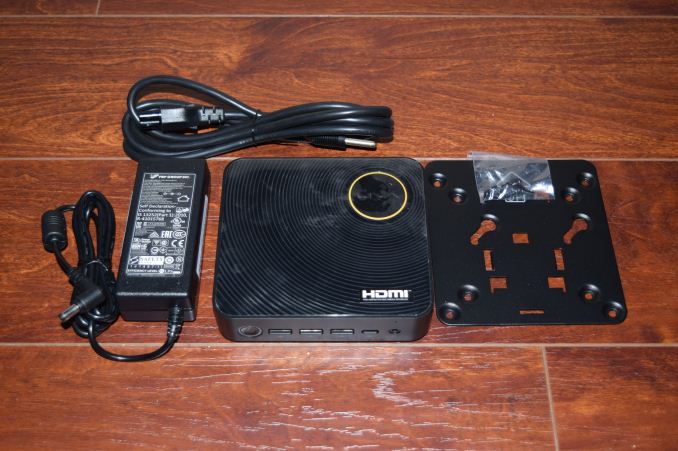 One of the interesting hardware components in the LIVA-ZN33 is the integrated digital microphone. This allows the end user to configure it as an always-listening machine (if needed), without the need to connect an external microphone. The other selling point is the availability of two GbE RJ-45 ports. Intel Ethernet controllers would have sweetened the deal, but, ECS has taken the cost factor into consideration and opted for Realtek controllers.

The industrial design is attractive and the unit feels solid. The chassis is made of plastic (not uncommon at the targeted price point). The internal heat sink which faces the bottom lid, however, is solid metal, and possesses good characteristics for effective heat transfer from the SoC. It would have been nice if the design allowed for the generated heat to dissipate via convection. In any case, we will take a look at the effectiveness of the thermal design in a later section.

The specifications of the Intel Celeron N3350 indicate that the SoC can support up to 6 PCIe 2.0 lanes, 2 SATA ports, and 8 USB ports. The break-up of the high-speed I/O lanes is interesting in the context of the availability of four USB 3.0 ports (3x Type-A + 1x Type-C) as well as two GbE LAN ports in the LIVA Z

The distribution of PCIe lanes in the LIVA Z is as below.

Since the used PCIe lanes are muxed with the USB 3.0 lanes, and, there are four USB 3.0 ports in the system, it stands to reason that at least one USB 3.0 port has its bandwidth shared with the PCIe lanes / networking interfaces. At the price point targeted by the LIVA Z, this is hardly an issue.

In the table below, we have an overview of the various systems that we are comparing the ECS LIVA-ZN33 against. Note that they may not belong to the same market segment. The relevant configuration details of the machines are provided so that readers have an understanding of why some benchmark numbers are skewed for or against the ECS LIVA-ZN33 when we come to those sections.