The Kingston HyperX Alloy Elite is a design that can be easily underestimated at first sight. The floating design and height of the keycaps instantly hint that this is a classic mechanical keyboard, yet it takes an experienced eye to discern that the top cover of the keyboard is solid steel, not plastic. Otherwise it can be easily discerned that, aside from the aesthetic design, the top bar of the keyboard – which hosts several extra buttons and a wheel – is the primary difference over the previously released Alloy FPS. 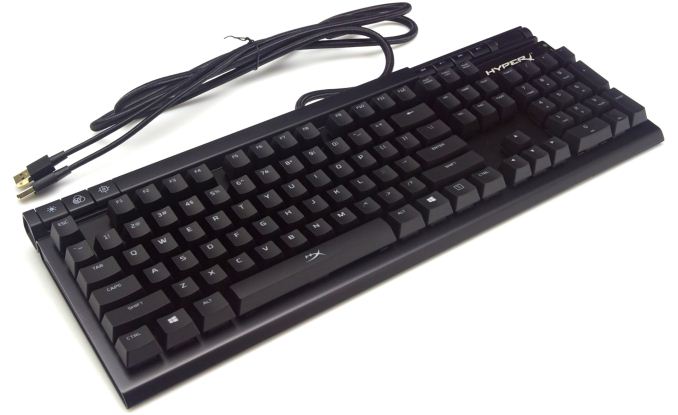 Closer inspection reveals that the top bar of the Alloy Elite is plastic, not metal. There are seven low-profile buttons on it, three to the left and four to the right side of the keyboard. Two of the three buttons on the left control the backlighting's brightness and effects. The third button enables “game mode”, a function that simply disables the Windows keys. The four buttons towards the right side of the keyboard are used for basic media functions. A plastic sound volume control wheel can also be seen at the far side of the top section. The wheel feels light at first, but it is sturdy enough and its motion is very smooth. At the far right side of the keyboard, right below the sound volume wheel and next to the company’s logo, the designer placed three indicative LEDs. Two of them are the classic Caps Lock and Num Lock indicators. The third is the “game mode” indicator.

We received the US layout version of the HyperX Alloy Elite. It is a standard 104 keys keyboard that fully adheres to the ANSI layout. It has a 6.25× Spacebar and seven 1.25× bottom row keys. The company logo is etched on the Spacebar key. The characters on the keycaps are both etched near the top of the keycap, where the backlight LED of each switch is. Meanwhile the keyboard doesn't feature a Fn key and, and as such, this keyboard features no advanced keystroke combination commands.

At this point, we should stop and describe what the HyperX Alloy Elite cannot do. Unlike the vast majority of its competition, the HyperX Alloy Elite is not by any means programmable. This means that it does not support the programming of macros, advanced commands, or even simple layout changes. Rather, it is a straightforward mechanical keyboard with some additional media keys and a nifty backlighting system. 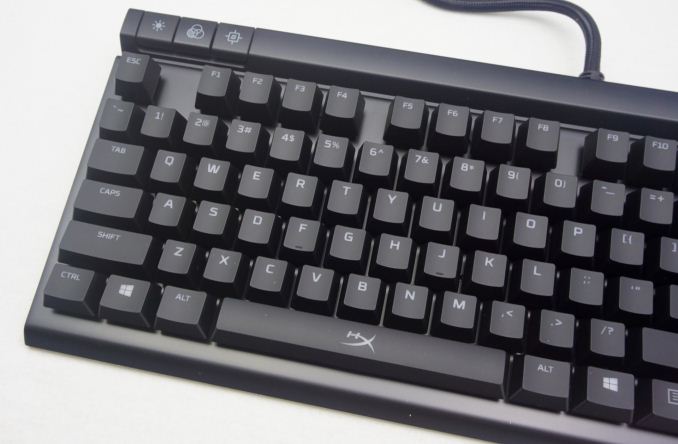 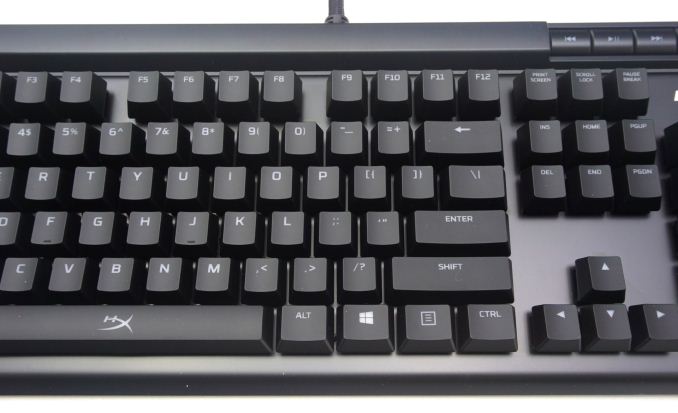 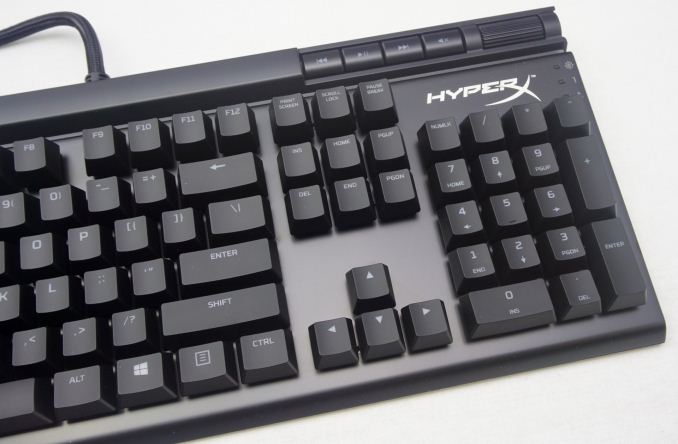 The designer of the HyperX Alloy Elite placed a single USB 2.0 port on the rear of the keyboard, about where the F12 key is. This would be an excellent connection point for a gaming mouse. Otherwise USB 2.0 is very slow for fast file transfers, but it will be effective for quick/small transfers with a flash drive. 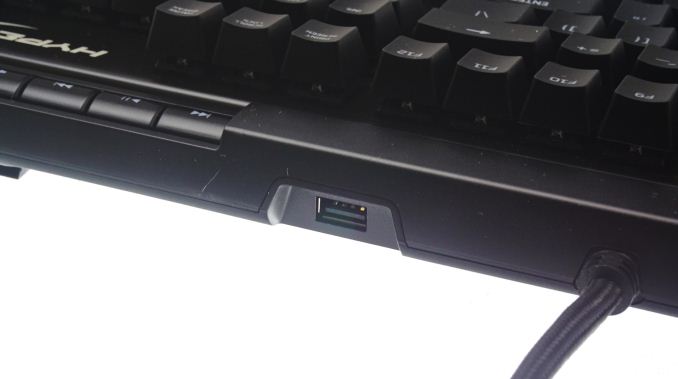 The HyperX Alloy Elite has two rear legs that lift the keyboard up to a reasonable fixed tilt. Four large anti-skid rubber pads are attached near each of the keyboard’s four edges. The attachment points for the palm rest locks can be seen near the front side of the keyboard. 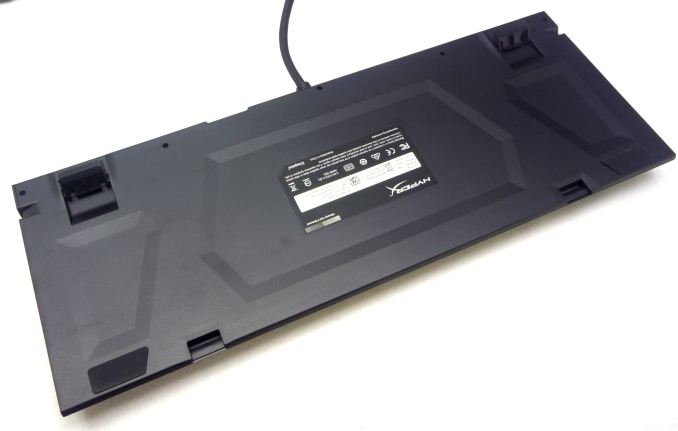 Kingston places the bulk of their marketing efforts of the HyperX Alloy Elite onto its unique backlighting features. The Alloy Elite features red backlighting beneath the keycaps and the media buttons. It is exceptionally applied, with the characters brightly and evenly illuminated, yet with minimal bleeding around the keycaps. A “light bar” is also present between the metal frame of the keyboard and its plastic top bar. Six pre-programmed lighting effects can be rotated via the button at the top left side of the keyboard. The sixth available option allows for a bit of customization by the user, allowing him/her to choose which keys will be illuminated. 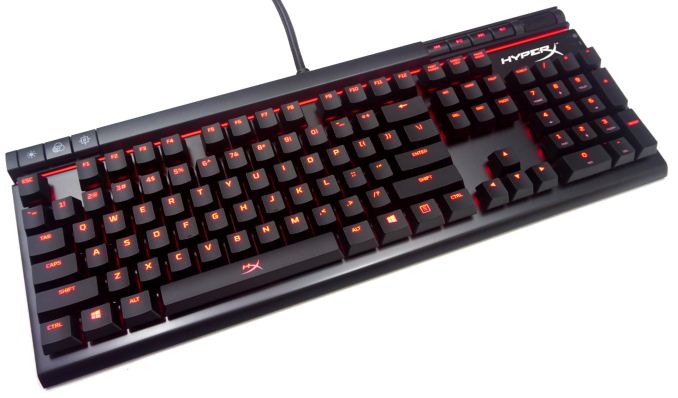 Beneath the keycaps, we find genuine Cherry MX switches. Kingston is offering the Alloy Elite with either Blue, Brown or Red switches preinstalled. Our sample came with Cherry MX Red switches. We can see Cherry cross-type supports beneath the larger keys and the Spacebar key. 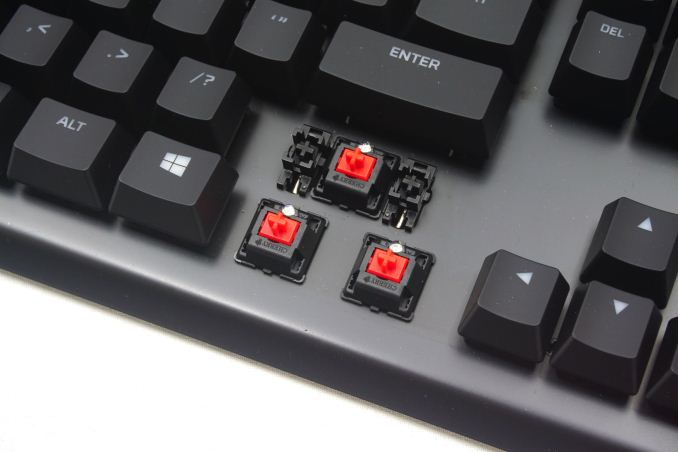 After removing the plastic bottom cover of the keyboard, we can identify that the main PCB of the keyboard is permanently attached to the steel frame. This design is particularly sturdy, as the top steel frame would have to be bent in order to damage the keyboard and that would require a lot of force. Everything is tidily organized and secured, and the soldering job is immaculate. 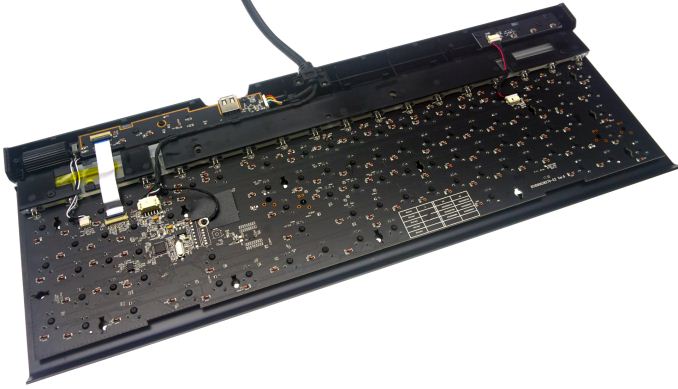 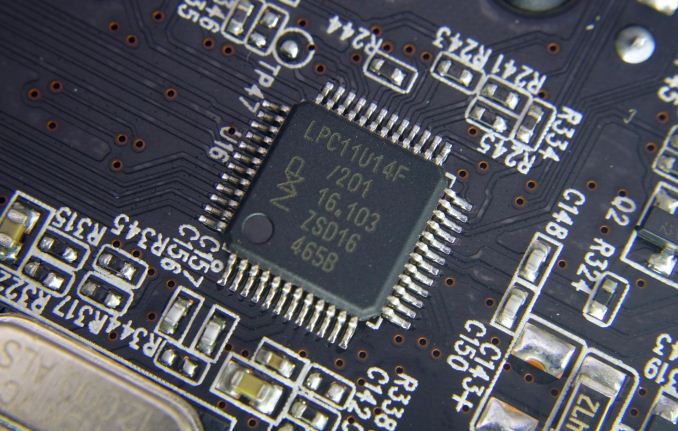