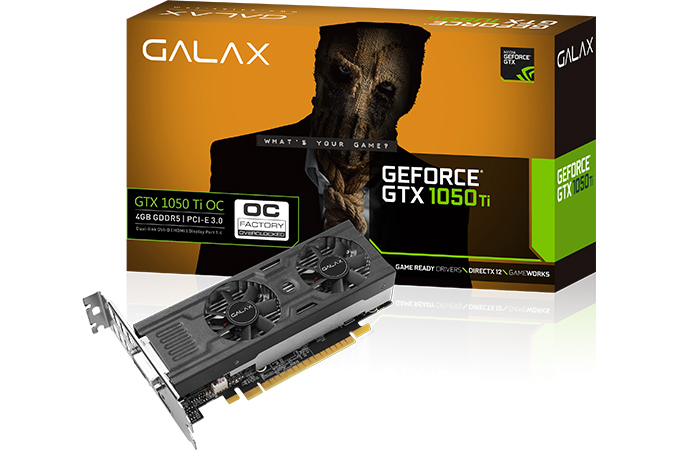 GALAX has joined the list of manufacturers to offer low-profile video cards based on NVIDIA’s GeForce GTX 1050-series GPUs. The boards resemble similar products from other makers and are designed to upgrade low z-height PCs or build affordable small form-factor HTPCs. As with the other 1050-series parts, these are <75W, meaning no PCIe connector is needed.

The GALAX GeForce GTX 1050 OC LP and the GALAX GeForce GTX 1050 Ti OC LP graphics cards are powered by NVIDIA’s GP107 GPU in different configurations and are equipped with 2 GB and 4 GB of 7Gbps GDDR5 memory respectively. Both add-in-boards use the same PCB design, which the manufacturer is proud of because it uses solid-state coils and has an additional heatsink on the VRM MOSFETs. For the main GPU cooling, the cards also use the same dual-slot dual-fan cooling system featuring an aluminum heatsink with a copper base. As for connectivity, both AIBs have the same set of outputs: one DL-DVI-D, one HDMI 2.0b and one DisplayPort 1.4 with HDCP 2.2 support. 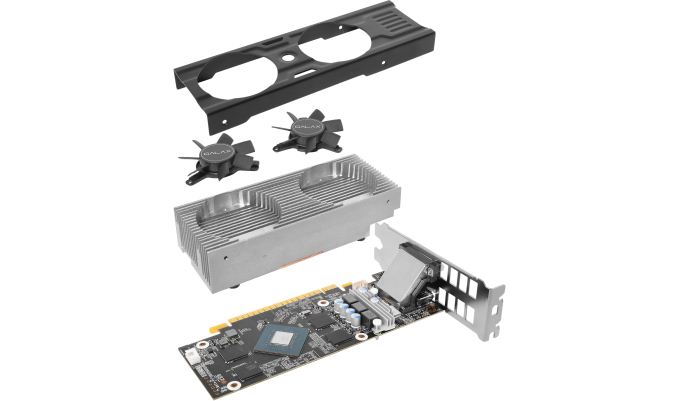 The new low-profile graphics cards from GALAX run ~12 MHz faster than reference designs. The 1% frequency increase does not have any effect on the official power consumption of the cards, so their TDP remains at around 75 W level. They do not need any additional power connectors and can be installed in any modern PC with an open-ended PCIe slot. 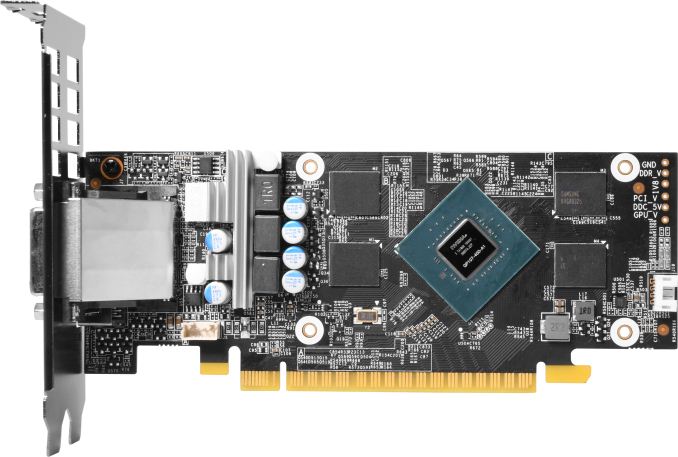 As reported previously, considering the positioning of the GeForce GTX 1050-series products, it unlikely that the new cards from GALAX will cost significantly more than NVIDIA’s MSRPs for similar video cards: $139 for the GTX 1050 Ti and $109 for the GTX 1050. Meanwhile, it remains to be seen when are we going to see the low-profile GALAX cards in the US. Right now the company’s online store as well as Amazon.com do not have them for sale. Since the GALAX brand belongs to Palit Microsystems, low-profile GeForce GTX 1050-series graphics cards from this manufacturer may emerge under different trademarks in different parts of the world (e.g., Gainward or KFA2 in Europe).