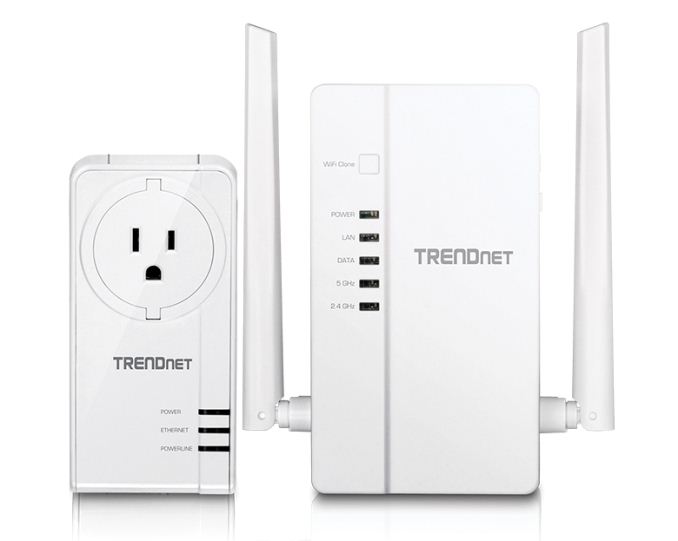 Extending the reach of Wi-Fi networks has become important with the rise in number and spread in usage location of Wi-Fi clients in a typical household. Typical range extenders sacrifice some performance by communicating with the main router using the same channel used for its clients. Late last year, we had evaluated various backhaul technologies being adopted in this space. Wi-Fi as a backhaul medium worked great in our particular evaluation location. However, there are scenarios in which Wi-Fi signals get attenuated very quickly (say, houses with thick brick or concrete walls). In those cases, powerline communication may present a better backhaul option.

At CES 2017, TRENDnet is launching the TPL-430AP wireless access point. They will be selling it under the 'WiFi Everywhere' tag. The product uses HomePlug AV2 technology. In particular, it adopts the Qualcomm Atheros QCA7500 chipset with V2 MIMO powerline operation in the 0 - 68 MHz band. The product also includes a built-in dual-band AC1200 access point (2x2:2 802.11ac/b/g/n, with 867 Mbps in the 5 GHz band and 300 Mbps in the 2.4 GHz band). It also has two Gigabit LAN ports.

An issue with some of the powerline Wi-Fi extenders in the market is the appearance of a whole new SSID and putting the onus on the customer to replicate the Wi-Fi settings from the main router (which could be from a different vendor). TRENDnet fortunately recognizes this issue and has a WPS-like setup to clone the Wi-Fi settings from the main router for simpler setup.

Consumers purchasing the TPL-430AP are already expected to have a HomePlug AV2 already in their network. Otherwise, TRENDnet also offers the access point as part of a kit - the TPL-430APK includes the TPL-430 as well as the TPL-421E (a HomePlug AV2 1200 powerline adapter that has a built-in passthrough outlet).

In other TRENDnet CES news, a number of new USB-C adapters are also being launched - welcome news for the USB-C ecosystem.