Professional testing requires the emulation of real-world situations but with repeatable results; thus, a perfectly controllable test setup and environment are required, especially for comparable results. Testing the thermal performance of any case with a typical real-world setup technically limits the comparability of the results to this setup alone, as an active system interacts with its environment and the change of a single component would alter myriads of variables. As such, we developed synthetic loads that emulate the thermal output of real systems, which however are passive, steady and quantifiable.

To that end, our testing displays the thermal capabilities of the case alone, as if it would have to deal with the entire thermal load by itself, regardless of the system that would be installed inside it. Laboratory data loggers are being used to monitor the PT100 sensors and control the safety relays, which are fully accessible via our custom software. Three such loads have been developed; the ATX version simulates a 200W CPU, 50W VRM, 30W RAM and 4 × 120W GPU card thermal load. Finally, three 3.5" HDD dummy loads have also been created, with each of them converting 30 W of electrical power to thermal, bringing the total thermal load of the ATX test setup up to 850 Watts. As such, the thermal load is immense and only the best of cases will be able to handle it for more than a few minutes, we are also performing a test with a thermal load of 400W, with all of the aforementioned components except the HDD drives at about 42% power, which is more suitable for the majority of cases.

Noise testing has been performed with a background noise level of 30.4dB(A). Advanced noise testing is also being performed, in order to assess the ability of the case to dampen the noise of the components installed inside it. This includes the installation of two noise-generating sources (strong fans) inside the case, one positioned approximately over the first expansion slot and one over the CPU area, which generate ≈ 44.2 dB(A) when unobstructed. During the advanced noise test, all stock cooling options of the case are entirely disabled.

Do note that the Carbide 600Q can support only two 3.5” devices, so the total actual thermal load in every test is reduced by 30W. The extra included 140 mm fan is being used, installed at the front of the case as an intake fan.

Even taking into consideration that it's not quite apples-to-apples testing since the actual total thermal load is only 820W, the thermal performance of the Carbide 600Q is astonishing. It is the only ATX case we have tested to this date with performance figures near to those of the monstrous Nanoxia DS6, a massively larger case. In terms of raw thermal performance, the Carbide 600Q beats even Corsair’s own Graphite 760T, a gaming case designed with thermal performance in mind. Apparently, the designer was not just trying to impress with his idea to reverse the motherboard tray, but there truly is a substantial thermal performance improvement to be gained from such an arrangement. However, the readings from our HDD dummy loads were high, even with two such loads installed instead of three. The design of the case offers very little cooling to the drives installed. 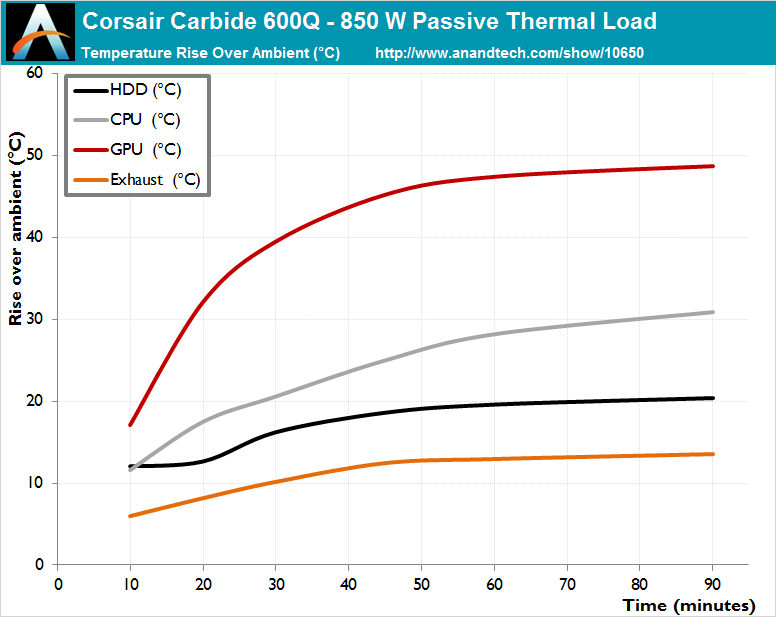 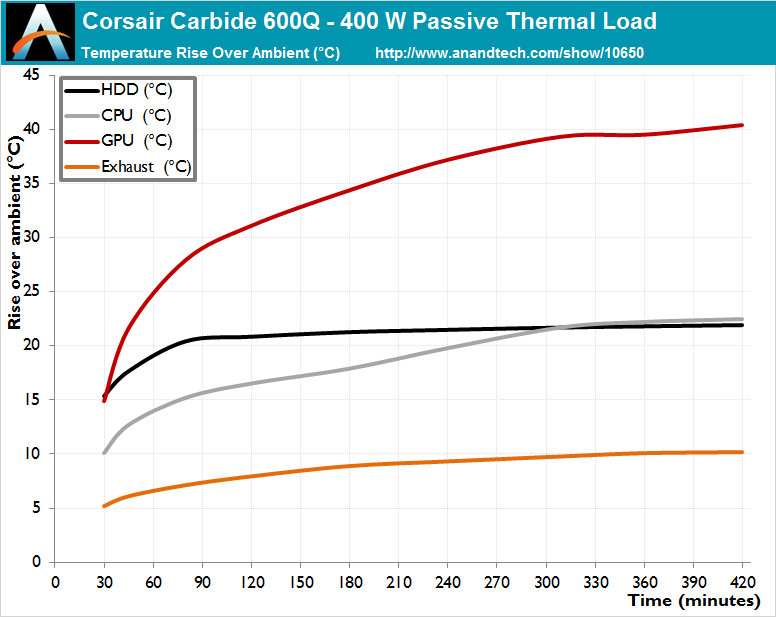 With all three 140 mm fans installed, the thermal performance of the Carbide 600Q is more than satisfactory. Even though the fans themselves are not very quiet, the insulation of the case allows it to maintain very reasonable noise levels even with all three fans running at maximum speed. The maximum sound pressure level that our instrumentation recorded was 37.4 dB(A) from one meter away in an environment with a background noise level of 30.4 dB(A). This corresponds to an audible but subtle humming noise that was mostly coming from the side vents of the faceplate. At lower speeds, the three cooling fans are virtually inaudible. 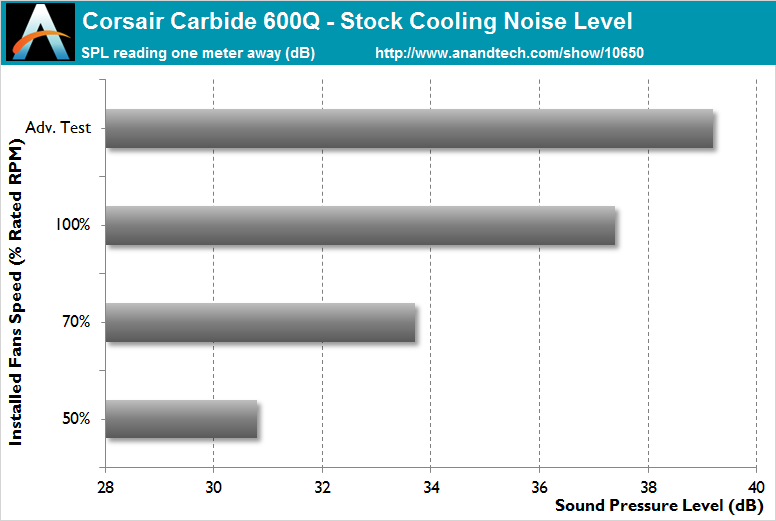 Corsair designed the Carbide 600Q for maximum acoustic comfort, with no openings towards the front of the case and insulative material installed on the front, top and side panels. The design does dampen the noise of the installed equipment significantly. Our instrumentation measured a drop of 5 dB(A) during our advanced testing, a considerable and clearly discernible difference. 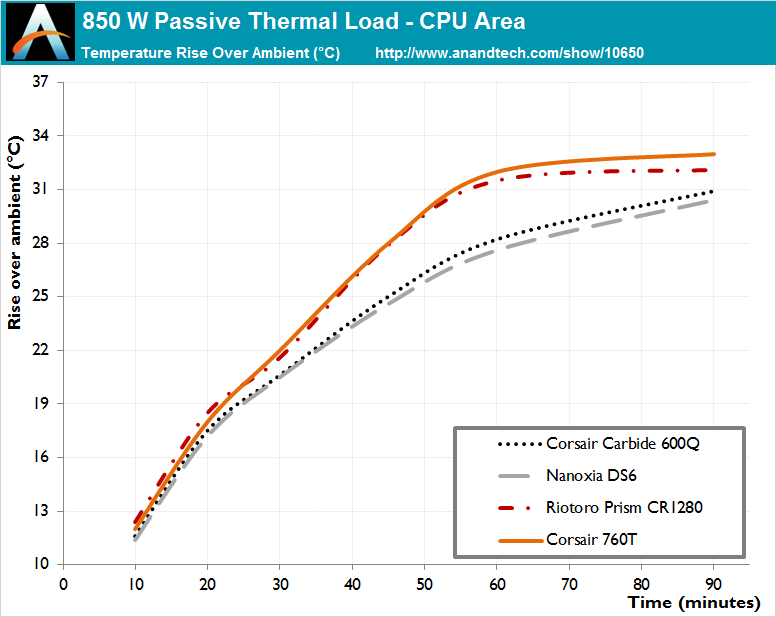 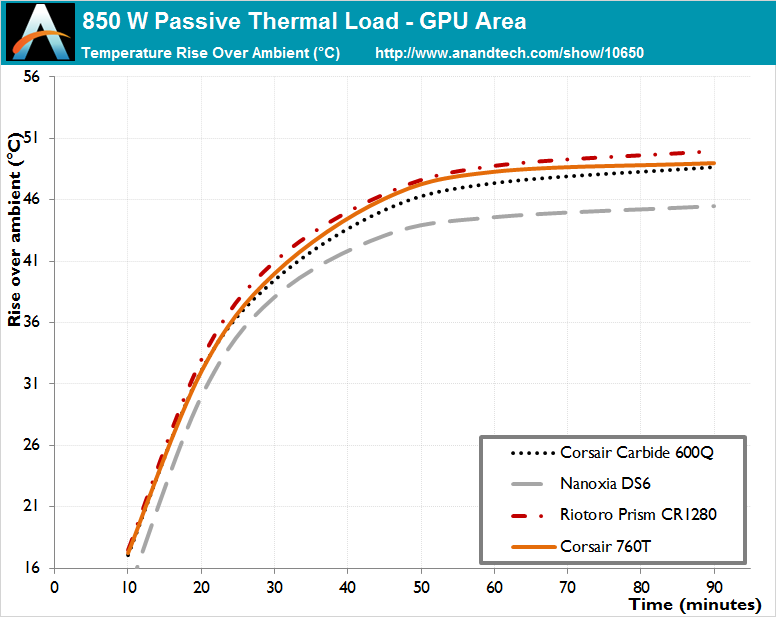