The Exterior of the NZXT Manta

With a postmodern design sporting curved panels and smooth surfaces, the NZXT Manta is designed to stand out from the crowd. As we will see in the following sections, the curved panels are not just for show, adding to the functionality of the case. However, they also increase the width of an already significantly large Mini-ITX case. Measuring 42.6 cm tall, 24.5 cm wide and 45 cm deep (16.8 × 9.7 × 17.7 in), resulting to a volume of 47 liters, the Manta is massive for a Mini-ITX case. It is just 3% smaller than the Zalman Z9 Neo, a full ATX case, and nearly 60% larger than the Cougar QBX, which also is a tower Mini-ITX case. NZXT clearly was not very concerned about making the Manta compact, only to have a high performance gaming tower reduced down to Mini-ITX motherboard dimensions.

We received the black version of the Manta with a windowed side panel. NZXT also offers white and windowless versions. The satin black paint is very smooth to the touch and slightly resistant to fingermarks. On the other hand, the glossy acrylic window that NZXT installed is highly reflective, making it almost impossible to see inside the Manta from a large angle or if the lighting inside the case is poor. The “rainbow” effect seen in some of our pictures is caused by the camera’s polarizing filter, which is unsuccessfully trying to filter all of the lighting reflected by the acrylic panel. 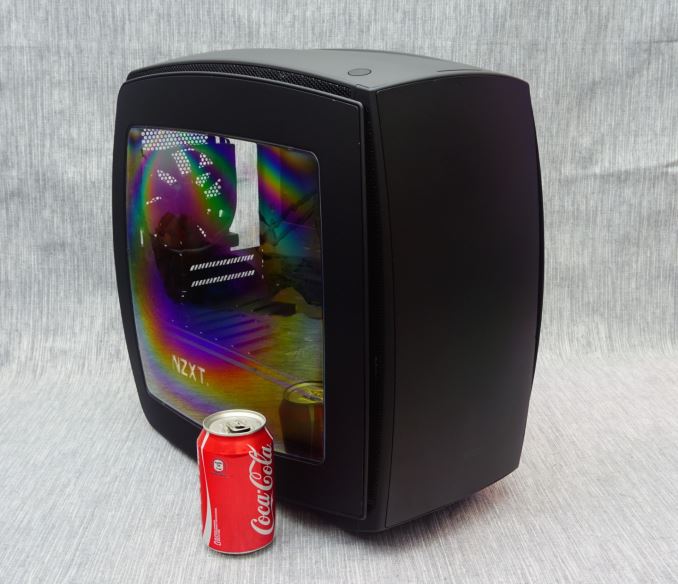 11.2oz soda can inserted as a size reference.

The front panel of the Manta is entirely plain. There are no external drive bays, no buttons and no ports to be found on it. NZXT is even supplying their own company logo with the case’s bundle, allowing the users to choose where (and if) they want it adhered. 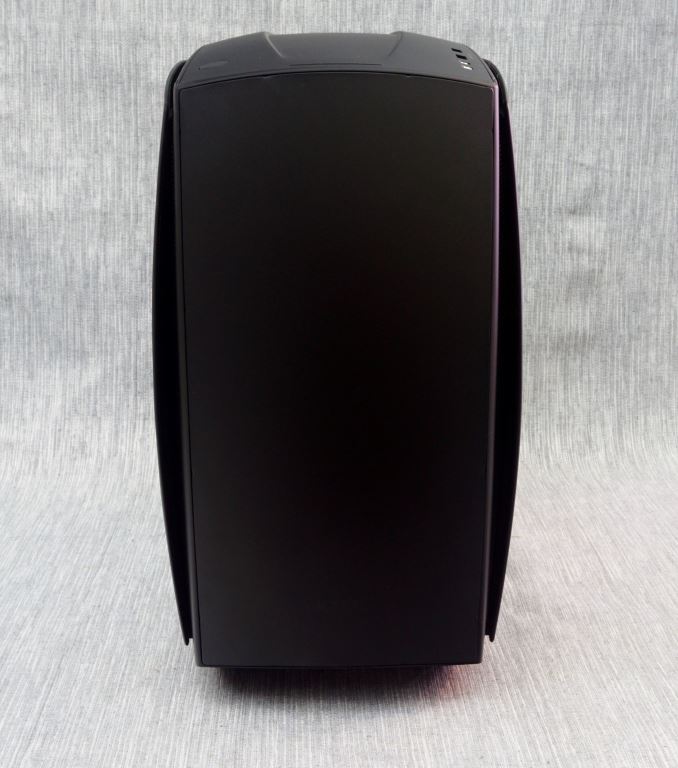 In order to reach the intake fan filter, the front panel needs to be removed. This is an easy task, as the panel can come off by simply pulling it from its bottom. The intake filter is a simple nylon filter that cannot stop small particles but can be easily cleaned and reused any number of times. 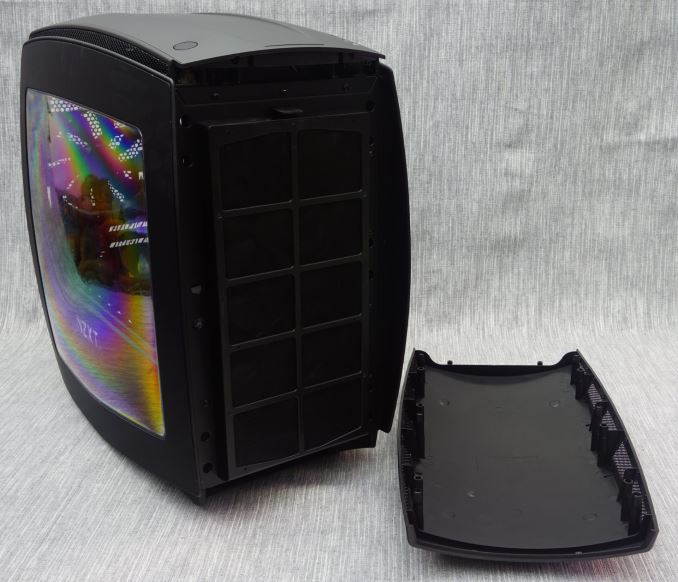 A closer look in between the side panels and the main body of the case reveals vents, which explains where the front intake fans draw air in from and where the air pushed by the top exhaust fans goes, as there are no other visible openings on the main panels of the case. This approach however undoubtedly adds a significant amount of air flow resistance that can adversely impact the performance of the cooling fans. 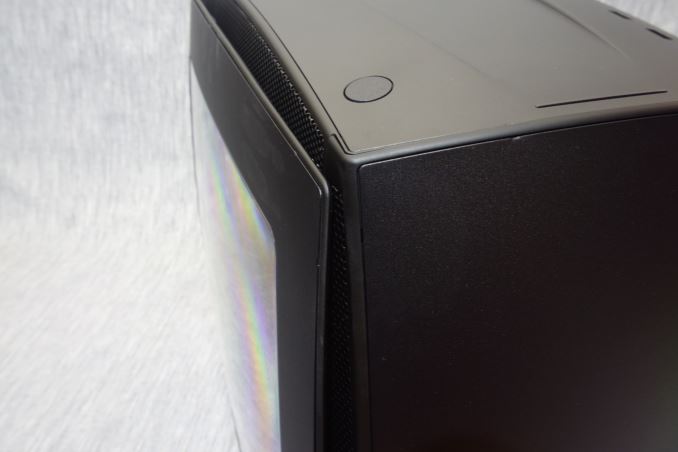 The front I/O ports and buttons can be found at the top panel. A large power on button can be seen to the left side of the panel, while two USB 3.0 ports and 3.5mm audio jacks have been installed to the right side of the panel. There is no door or cover for the USB/audio ports. 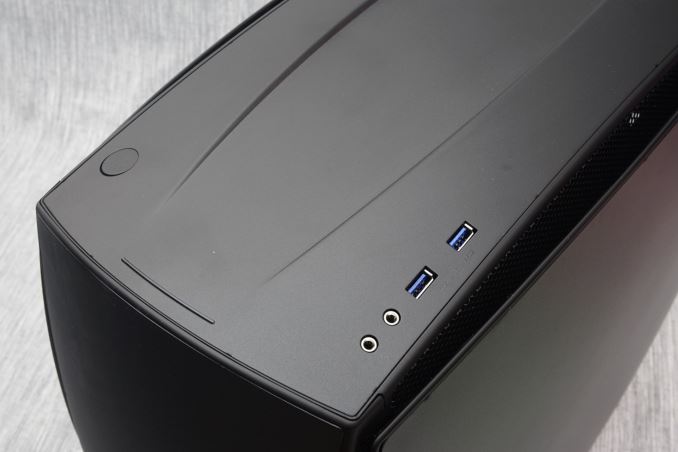 A look at the rear of the NZXT Manta reveals the presence of a 120 mm exhaust fan, which also hints that the case is just a shorter version of a gaming tower system. NZXT placed the PSU compartment at the bottom of the case. 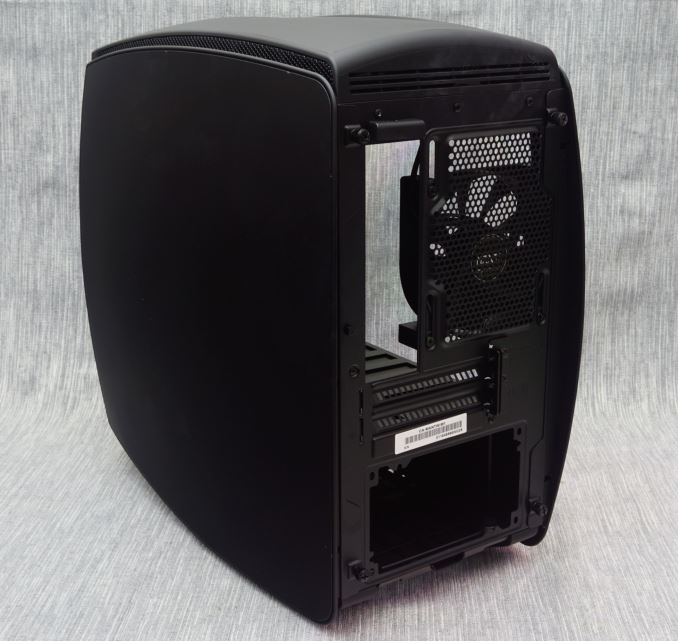 The NZXT Manta stands on two very wide U-shaped legs. Four long anti-slip rubber pads keep the Manta from slipping on virtually any surface. A nylon filter can be seen covering the PSU intake, which can be removed from the back of the case. 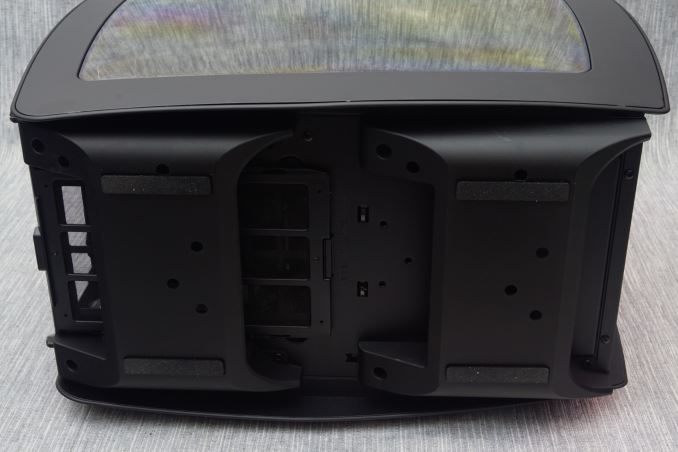