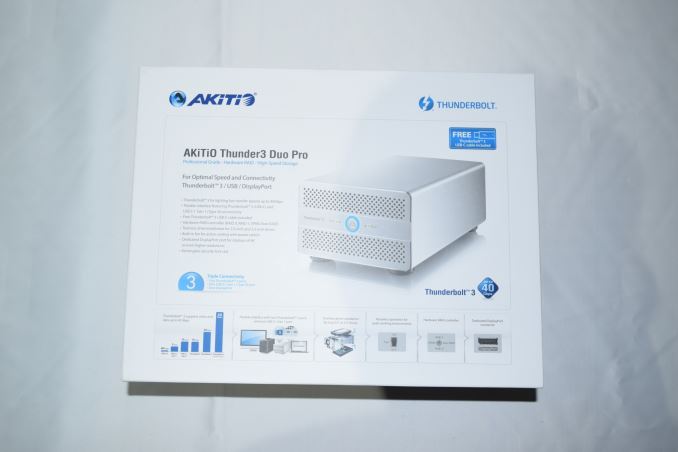 A lot of attention has been paid to high-speed I/O interfaces for computing systems over the last five years. Flash-based storage media capable of multi-Gbps throughput have become very affordable. Display resolutions have also seen a rapid rate of increase. The necessity to support multiple such devices in both consumer and professional computing solutions have exposed the limitations of the traditional external I/O interfaces. While USB 3.x has become successful as an interface for high-speed peripherals, it does not handle display output. Intel has been attempting to solve this problem with Thunderbolt Technology since 2011. Unfortunately, the uptake outside the Apple ecosystem for the first two versions has been minimal at best. Thunderbolt 3, however, promises to be a game-changer. Systems and motherboards with Thunderbolt 3 support started shipping in late 2015. The first Thunderbolt 3 peripheral to appear in the market was the Akitio Thunder3 Duo Pro, a hardware RAID solution with two drive slots. This review looks at the various features of Thunderbolt 3 and what the Akitio Thunder3 Duo Pro brings to the table.

Direct Attached Storage (DAS) units have been the go-to devices for consumers looking to store and have fast access to large amounts of data. The advent of high-speed interfaces such as USB 3.x and Thunderbolt have enabled a new generation of DAS units that allow the host system to access the member disks without any bottlenecks. We have looked at a few DAS solutions with Thunderbolt 2 before. Today, we are reviewing the first storage solution with Thunderbolt 3, the Akitio Thunder3 Duo Pro. The unit has daisy chaining support (i.e, two Thunderbolt 3 ports), a USB 3.1 Gen 1 device interface and a full-sized DisplayPort 1.2 output that is driven by the DisplayPort lanes in the Thunderbolt 3 link. 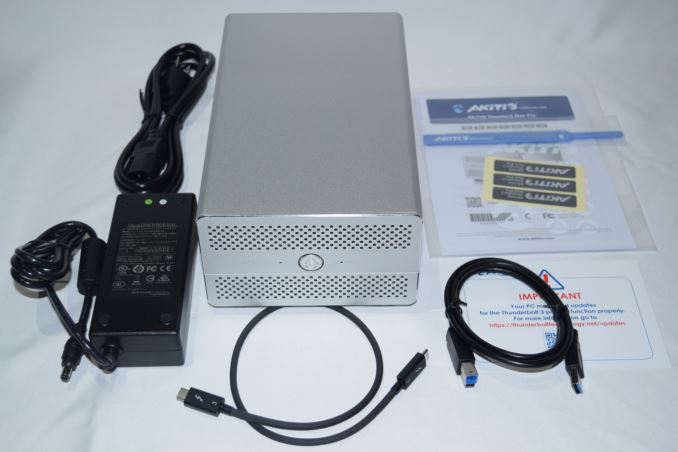 The Akitio Thunder3 Duo Pro is meant for desktop use and needs an external 90W power adapter (12V @ 7.5A). The chassis design also allows for stacking, if needed. In addition to the main unit and the power adapter / cord, the package also includes a Thunderbolt 3 cable (capable of 40Gbps data transfer) and a USB 3.1 Gen 1 Type-B male to Type-A cable. A cable-tie, quick setup guide, warranty terms and a reminder to update to the latest drivers / firmware for the host PC are also included. The detailed specifications of the unit are provided in the table below.

The gallery below takes us around the aluminum chassis. Important aspects to note include indicator LEDs for the two drives in the front panel and the perforations (which have a filter on the inside) that allow air to be pulled into the unit, over the drives and out through the fan. The rear panel is flanked on either side by screws that can be removed without the need for any tools. Loosening them allows for the external chassis to slide out.
The rear panel has a fan and a switch to control it (can be turned off for SSDs). Two Thunderbolt 3 ports, a full-sized DisplayPort 1.2 output, a power input jack and a USB 3.1 Gen 1 Type-B female port make up the lower part of the rear panel. A Kensington lock slot and the RAID-level selection indicator form the rest of the features.

The RAID-level selection indicator is covered by a plastic film from the inside that makes it impossible to accidentally change the RAID level without opening up the unit.  The gallery below shows the internal components of the Akitio Thunder3 Duo Pro.

On the board side of things, we have the Intel Alpine Ridge Thunderbolt 3 controller in its dual-port form (). The ASMedia ASM1153E fulfills the SATA to USB bridge functionality for the USB 3.1 Gen 1 device port. On the SATA backplane, we have the ASMedia ASM1062R SATA RAID controller that bridges 2x SATA III ports to two lanes of PCIe 2.0. The backplane also has an ASMedia ASM1456 signal switch to mux / demux SATA signals.

The setup process is simple, since the Thunder3 Duo Pro involves hardware RAID. Installing the SSDs or HDDs is a simple tool-less affair. Removal is a bit complicated, since the drives have to be gently tugged out from the SATA connector. A flat screwdriver can be used to set the desired RAID level (RAID0, RAID1, JBOD or SPAN). In case of a live switch of RAID level (i.e, change while the unit is powered on, it is necessary to press the 'Set RAID' button that is visible in the rear panel once the chassis has been slid off. Otherwise, one just needs to set the pointer to the desired RAID level and boot up the unit.

In the rest of the review, we first take a look at Thunderbolt 3 in detail, followed by a description of how our testbed was built and details of our evaluation methodology for the unit. We then talk about the various standard performance benchmarks. Following that, some special Thunderbolt-only aspects such as daisy chaining and its performance implications are discussed.