The Razer Blade Stealth Review: Razer Takes On The Ultrabook

From a distance, you would be hard pressed to tell the Razer Blade Stealth apart from the Razer Blade 14, if not for the fact that it’s a bit smaller. The Stealth is made out of the same CNC aluminum shell, with a matte black finish. The finish looks great, but it’s a bit of a fingerprint magnet, so keep a cloth handy. The top of the lid has Razer logo, which is really the one thing that moves away from the subtle look that the rest of the laptop has. With the matte black finish, and clean lines, the Stealth is as elegant as any Ultrabook around.

The left side has the Thunderbotl 3-enabled USB-C port for charging and docking, as well as a single USB 3.0 port and 3.5mm jack. The right side has a full-size HDMI port and the other USB 3.0 port. Other than those, the Stealth is devoid of openings or buttons on the outside.

It’s not too often we give much time to the underside of a notebook, but Razer is one of the few companies to do this right. The cooling intakes are found here, as well as some extremely sticky feet which run the entire width of the laptop. This gives the Stealth a very solid posture when sitting on a desk, and I know this is hard to believe, but that’s not always the case with every laptop. 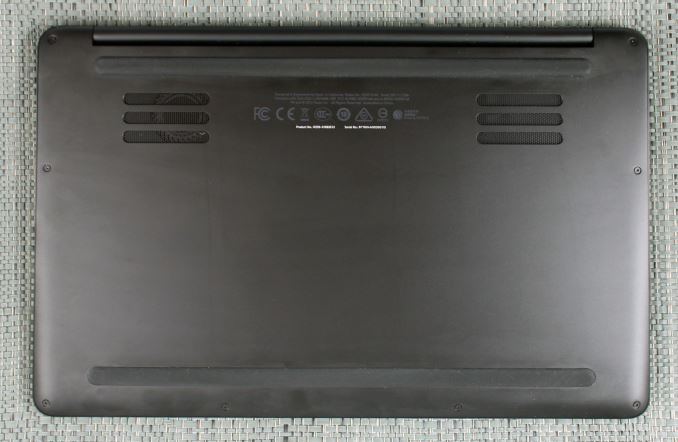 Razer’s unique cooling solution puts the cooling exhaust vents in the hinge between the display and back of the laptop, which is the same cooling solution they offer on the larger Blade 14. This hides the exhaust vents for a cleaner look, although it can cause some heat build-up in the hinge itself. This isn’t as big of an issue in the Stealth as it is in the Blade 14, due to the much lower thermal output of the Stealth.

Opening the lid, you see a couple of things right off the bat. First, Razer has kept the same deck mounted speakers as the Blade 14, which is nice to see since most Ultrabooks end up putting the speakers on the bottom. You also see that the display bezels are quite large, and Razer could have easily put a 13.3-inch panel into this notebook. Thin bezels seem to be something only Dell and Microsoft want to offer. The larger bezels do allow Razer to fit a good size keyboard into the chassis, in addition to the side mounted speakers, and there is also plenty of room for the generous trackpad. 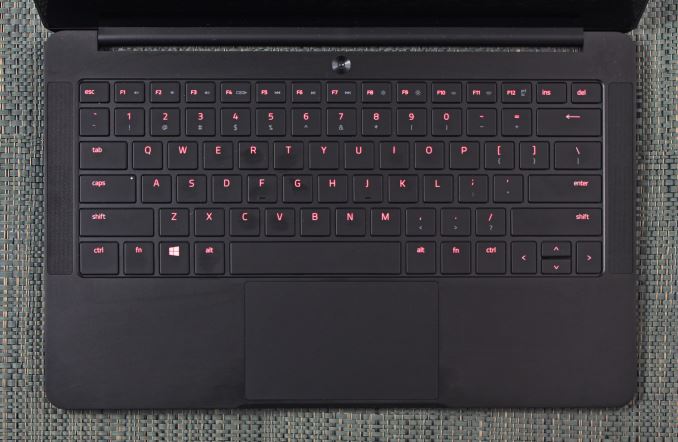 The keyboard in the Razer Blade Stealth is a typical Ultrabook keyboard, with shallow travel due to the limited thickness of the device. Anyone who is going to be writing a novel is going to want something with a bit more travel. It’s a common complaint but I understand there is only so much travel available when trying to keep the device as thin and light as possible. The resistance on the keys is decent, which helps a bit. Surprisingly, and once again likely due to Razer wanting to expand their customer base, the Razer font which is used on their other products is not on the Stealth. Instead you get a much more traditional look to the key faces. Razer’s trackpad is quite good, which a nice large smooth surface and accurate responses. The trackpad leverages Synaptics software for multi-touch.

Likely the most interesting aspect of the keyboard though is the backlighting. The Stealth is the first laptop to offer per-key RGB backlighting, and Razer uses their Chroma branding to distinguish this. This means you can change the key lighting to any of 16.7 million colors (red green blue, 256 levels per color) and the Razer Synapse software gives full customizability to this. There are several patterns you can choose from, including spectrum cycling to shift among all of the colors, breathing, wave, ripple, or just static. It also lets Razer do some funky things like being able to change the function key lighting when the function key is pressed. It’s a great effect, and being able to change the backlighting lets you customize the laptop to your own tastes, and considering the pricing on the laptop it’s a nice addition.

The design of the Stealth is pure Razer, and they’ve done a great job taking the look and feel of their larger laptops and scaling it down to the Ultrabook form factor. The CNC aluminum shell is solid, and the build quality is very nice. The entire package is just 13.1 mm or 0.52” thick, and weighs 1.25 kg or 2.75 lbs.