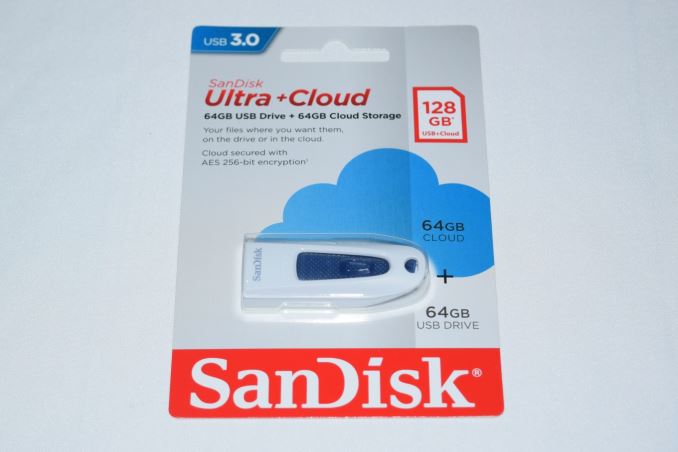 USB flash drives (UFDs) are a dime a dozen in the current market. In order to stand out in the crowd, manufacturers have adopted a two-pronged approach. While one category is devoted to drives that provide maximum possible capacity in a minimal footprint, the other category aims at delivering the maximum possible performance at a reasonable cost. Usually, UFDs are worth a capsule review, since there is really not much to talk about other than performance / endurance and price. However, SanDisk has opted to go with a third strategy for one of their UFD product lines - bundling a 3-year cloud storage subscription along with a commodity USB 3.0 flash drive.

The SanDisk Ultra +Cloud drive is the same as the SanDisk Ultra in terms of hardware, and, as we determine further down in the review, performance too. It adopts a retractable design for the USB 3.0 Type-A male port. This avoids the need for a cap and goes a little towards preventing accumulation of dust in the USB connector. However, the sliding mechanism involves pressing down in the middle of the unit. It feels a bit flimsy and is difficult to operate with one hand. The industrial design and external aspects of the drive are pretty much standard for a commodity USB 3.0 flash drive. The gallery below shows some pictures of the packaging and the drive itself.

The real difference with the Ultra +Cloud version is the bundled cloud service - SanDisk +Cloud, which we will cover in detail in the next subsection.

The Ultra +Cloud drive comes with an installer program for the SanDisk +Cloud service. Since the cloud service offer of 64GB for 3 years is tied to the flash drive, the installer run from the flash drive enables the user to create a new account for the service. The installer program is available for both Macs and Windows PCs. We checked out the cloud feature on a Windows machine. The gallery below shows the sign-up process for the service.

The usage process is very similar to that of Dropbox (minus the versioning capabilities and associated usage features). While Dropbox provides context menu items only within the Dropbox shared folder, SanDisk +Cloud adds a permanent one - a 'Copy to SanDisk +Cloud' option. In addition, a separate drive letter is created on the PC that lists everything stored in the cloud without occupying space on the local machine. A program runs in the background in the taskbar that enables users to pull up the current status (usage, upload data amount remaining etc.) and also alter settings such as local cache size and location, drive letter, upload bandwidth etc. The following gallery shows these aspects of the SanDisk +Cloud Windows client program.

The cloud storage is also accessible via a browser (for machines on which one can't install the client program / access on someone else's machine). The gallery below shows the browser user interface. Note that the cloud servers are accessed via 'pluscloud.sandisk.com' (we will come to this a little bit later in this section). Additional storage can also be purchased via the browser UI.

Like any other cloud service, the SanDisk +Cloud also comes with mobile apps (Android and iOS only). We took the Android version out for a spin on a Nexus 6P. The gallery below presents some screenshots from the Android app.

The app allows users to automatically back up photos and videos taken on the mobile device to the cloud. Obviously, this can be restricted to Wi-Fi only. There are also other settings like passcode locks relevant to the usage of the cloud service on a mobile device.

Coming back to the cloud platform, it might surprise users to see SanDisk operating a cloud service that actually rivals the facilities provided by established vendors. SanDisk is more of a hardware / systems company and there is an obvious indication that the cloud service is is not a completely outsourced third-party operation. The SanDisk +Cloud service apparently runs on AWS (going by the IP that corresponds to pluscloud.sandisk.com). Going by these clues, it appears that SanDisk has forged a partnership with a cloud service specialist in order to improve the appeal of their UFDs. A little digging around reveals that the cloud operations are actually backed by Bitcasa.

Bitcasa has had an interesting history. Initially, they shook the cloud storage market with low-cost direct-to-consumer infinite storage capacity plans. However, that ended up getting nixed towards the end of 2014. Since then, the company has shifted its expertise and focus to OEMs and developers who want a cloud platform / backend for their products and applications. One of Bitcasa's new business models is to tie up directly with device manufacturers in order to cloud-enable various devices such as flash drives, NAS units, mobile devices and the like. This business model will definitely serve Bitcasa well compared to a direct-to-consumer play in a very crowded cloud storage market.