I can keep going with these examples, but the point here is that the component choices made here can have a major effect on image quality and the overall user experience of the camera. At the same time though, it’s important to keep in mind that the camera system itself is just one aspect of what makes a great camera. Image processing also plays a huge role in overall camera quality, and for the most part is a black box that we can’t really examine. In the case of the LG G4 it’s especially important to examine the changes to architecture as seen in the table below.

If we track the progression of camera upgrades from the LG Optimus G to today, we can see that jump from the OG to G2 saw upgrades to the sensor, OIS, and optics, while the G3 was mostly an upgrade in the form of better OIS and laser AF. The G4 represents a major refresh over the G3 though, with a change to the sensor, optics, and a new white balance sensor that incorporates both IR and visible wavelength measurements.

In the case of the IMX234 sensor, we have very little data regarding improvements to color filtering, sensitivity, full well capacity, or anything else beyond sensor size and resolution. However, if we assume a straight increase in sensor size with no other changes in key sensor spec the sensor will be about 35% more sensitive than the sensor of the G3/G2 although this would be mostly in comparison to the IMX214 rather than the IMX135 of the G3/G2.

When it comes to optics, aperture widens significantly as well from f/2.4 to f/1.8, which would also introduce a 77.8% increase in sensitivity independent of sensor size, although it’s important to keep in mind that chasing aperture for the sake of aperture can significantly compromise practical resolution across the field of view. Equivalent focal length is also slightly shorter at about 28mm while the G3 was closer to 29mm, likely a concession to reduce the z-height of the sensor which allows for a wider field of view at the cost of reduced resolution and increased distortion.

The laser AF sensor continues to be included with this generation, and after some digging that didn't make it into the LG G3 review, I managed to find that the sensor used here is an ST-M VL6810 time of flight sensor which confirms that this is a modified version of a proximity/light sensor and relies on an 850nm laser to accurately determine absolute range out to 10cm, which can be roughly correlated to certain points on the auto-focus mechanism. The OIS mechanism has also improved from 1 degree of compensation to 2 degrees, which is definitely noticeable in practice. Stabilization on the LG G4 has a tendency to feel a bit looser than the stabilization on the GS6, but I suspect this is mostly due to the larger size rather than any real difference.

The final piece here is the color spectrum sensor, which is interesting but another black box like the laser AF sensor. As far as I can tell this is an AMS TCS3490 light sensor which has RGBC + IR sensing capabilities, which allow for light source detection and color temperature measurements. However, in my experience this sensor or the AWB hybrid mechanism has a tendency to select some strange white balances like the Galaxy S6 that have to be corrected by moving the viewfinder around a bit before it fixes itself.

While camera quality matters is ultimately what matters in a camera, the user experience of the camera can often determine whether something is possible or not. Issues like slow and/or unreliable auto-focus mechanisms, poor camera controls, poor preview resolution/fps, and long shot to shot time can often make it impossible to capture a good photo even if the camera is more than capable of taking one.

As smartphones, tablets, and other mobile devices have increasingly become the primary way in which people capture and share photos, the user experience associated with the camera and the camera quality itself has become crucial. I don’t think it’s a far leap at this point to say that a significant portion of people may never use anything other than a smartphone as their main camera given the cost and logistical issues involved in carrying a dSLR everywhere. 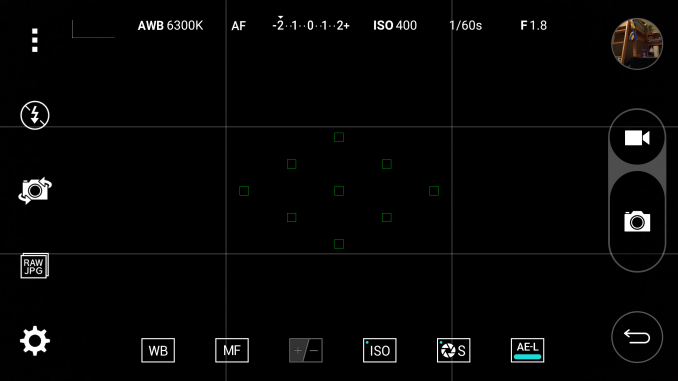 In the case of the LG G4, we can start by saying that this is easily the best camera application I’ve ever seen on any phone, bar none.

Ever since my first smartphone one of the first things that I wanted to have was full manual control over my camera due to issues with auto focus in macro and other challenging situations. The other issue was I often wanted more control over shutter speed and sensor gain, as it’s often possible that I would find myself in a low light situation where I could stabilize the camera by propping it against some random object but couldn’t force the shutter to expose for enough time to enable acceptable exposure. I also increasingly found that most smartphones on the market have some truly terrible post-processing settings. Noise reduction was often too aggressive on luminance noise (film grain), but too weak on color noise which is far more obvious. I’ll keep my complaints here rather short though as a discussion of post-processing is easily a separate discussion that is much larger than a single phone. 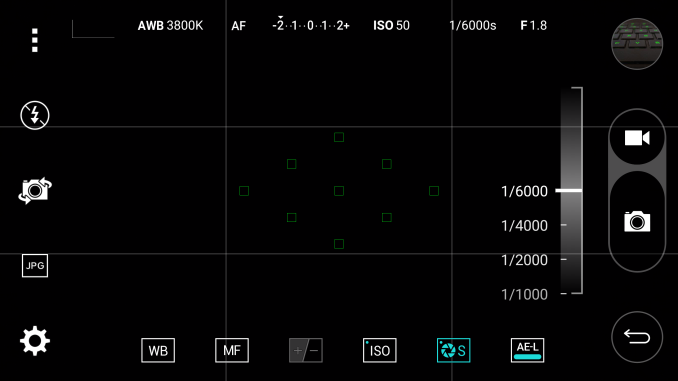 At any rate, the G4’s camera application can be launched with a single double-tap of the volume-down key when the phone is asleep. Unfortunately, LG has also dictated that doing this automatically takes a photo, which is a bit pointless when it’s almost impossible to make the photo properly composed when you do this.  Otherwise, the quick launch gesture is well-executed helpful to have.

Once in the camera, you have a choice of three modes mapped to the action overflow button. These modes are simple, auto, and manual. With simple, you have no choice of any particular setting. Tapping anywhere on the screen will cause the camera to expose and focus for the point that you tap and take a photo. One issue I noticed here was that settings in auto mode affected the settings in simple mode, but otherwise this mode works without issue. There’s also no clear way of activating video recording on this mode that I can see. 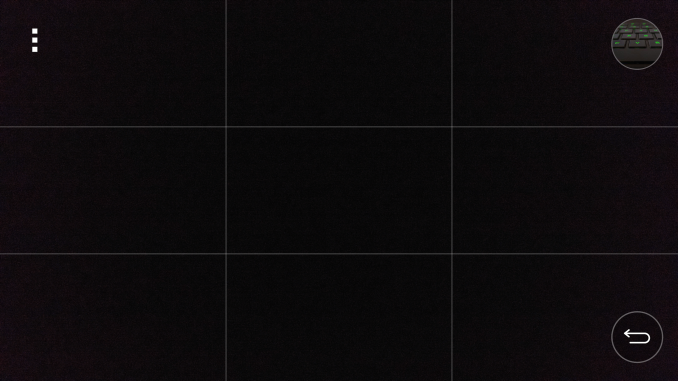 Auto mode is essentially without flaws in the G4, as you get the ability to set crucial options for auto mode with no pointless extras. Without accessing another menu, you can set capture mode for panoramas and dual shot, switch to the FFC, and adjust flash settings. With a tap of the settings gear, you can set HDR to auto, on, or off, aspect ratio, voice shutter, timer, and a framing grid. Given that this mode is supposed to be good for everyday use, LG has managed to keep this mode clear of clutter while leaving the essentials. I suspect most people will be able to get by with just this mode for almost anything. However, the manual mode is really what sets this phone apart from the rest that I’ve tested in recent memory. 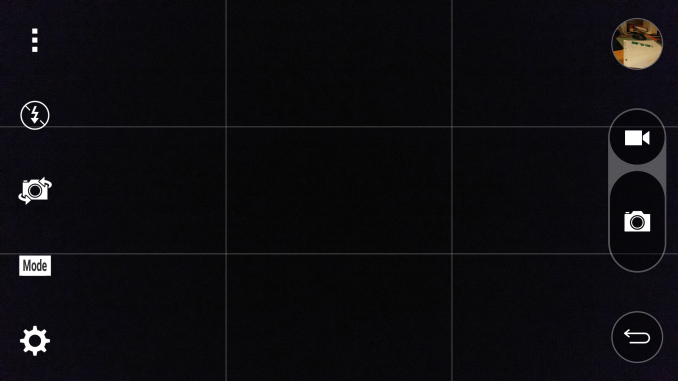 At the start of this section, I said the G4’s camera application is the best that I’ve ever seen on any phone, and if you were to judge it based upon the simple and auto modes you would probably come to a very different conclusion. However, the manual mode really transforms the UI.

In manual mode the auto mode controls are still mostly present, but the HDR toggle is replaced with a histogram toggle, and instead of panorama mode you have access to a RAW toggle. A new row of information is added to the top of the display, with a histogram, white balance setting, focus mode, light meter, sensor gain, and integration time. This helps with knowing what’s actually going on in the photo, even if you set everything to automatic you can still tell if the ISO/exposure isn’t quite right for what you want. For manual controls, you can set manual white balance in steps of 200K, with icons that indicate various points for conditions like fluorescent lights and cloudy skies. There’s also manual focus, exposure compensation, ISO, shutter speed, and exposure lock. All of these settings are implemented correctly, as the UI only shows one control at a time to avoid cluttering up the preview frame with adequate precision for each control (no ridiculously small or large jumps between settings).

The one complaint I have here is that the manual focus mode doesn’t have an option to automatically zoom in when touching the manual focus slider, which makes it a bit slow to get a macro shot in focus due to the need to manually set digital zoom to check if the phone is focused on the right object. Other than this one issue, the camera UI is easily one of the best I’ve ever used. There’s always room for improvement, but in the case of the G4 there’s very little need to improve. 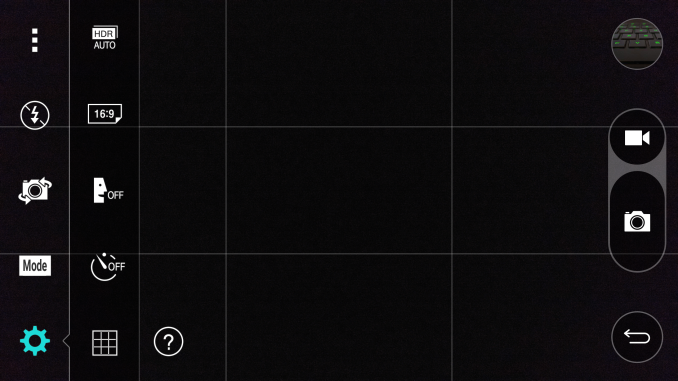 Moving past the camera app itself, latency is a critical aspect of a smartphone camera. Although throughput is important for burst shots, for the most part people want to just take one photo of something rather than a burst of 30-40 to pick through for the right photo. As a result, it's really crucial for smartphones to respond quickly when taking a photo and focus quickly as well. In order to test this in a standardized manner, we look at the best-case focus speed and capture speed by using a well-lit ISO resolution chart. Of course, there's room to improve here in the form of varying contrast, dynamic range, and luminance conditions but this test should give a pretty good idea of what a camera is capable of in the ideal case. 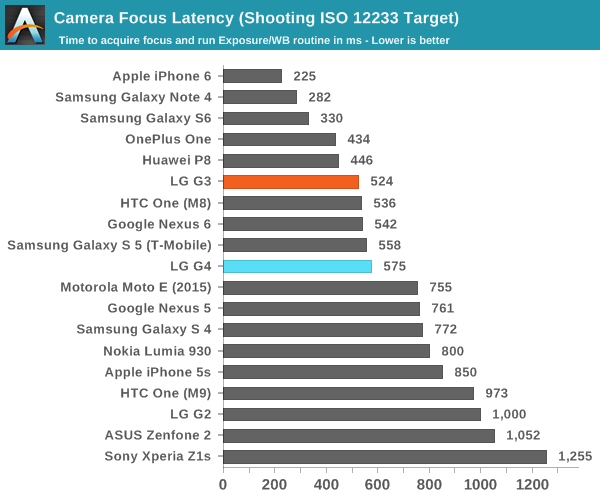 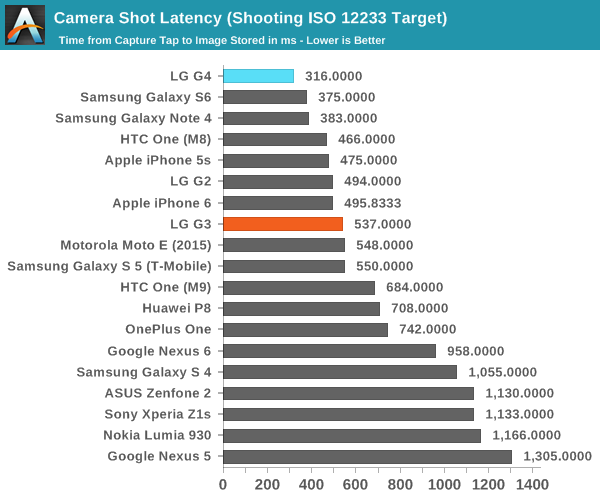 Broadly speaking, focus latency is pretty much at the same level as the LG G3. This isn't too much of a surprise, as the same laser AF system is used and there's no addition of PDAF to do closed-loop AF with when in good lighting conditions. The real improvement here is coming from capture latency, which is a significant improvement over the G3 and manages to slightly edge out the Galaxy S6. However, it should be noted that in low light conditions the shutter can go as long as 1/8 seconds, which will affect capture latency. In addition, HDR mode has a noticeable processing lag which can affect shutter speed in high-contrast conditions. However, in general the G4 is an incredibly quick camera, and in low light laser AF works quite well while PDAF is often unable to improve focus latency.