In configuring the G4, LG (and recently Motorola) have broken away from the pack in terms of SoC choice, electing to use Qualcomm’s Snapdragon 808. This makes the G4 the first flagship phone to launch with the 808 as its SoC, and the first phone overall that we have reviewed with the 808 as well.

For those that are unfamiliar with this SoC, I would refer to our previous coverage on the Snapdragon 808. In short, the Snapdragon 808 is effectively a simpler SoC than the Snapdragon 810, with two CPU cores on the big cluster instead of four, a more mature LPDDR3 memory controller, a smaller GPU, and some general reduction in features and complexity in some aspects like the ISP and video encode blocks.

Meanwhile to understand why four cores is not immediately better than two cores - and thus why Snapdragon 808 is not as big of a difference from Snapdragon 810 as it may first seem - it's important to understand Amdahl's law, which is pretty simple once you think about it. In short, for a given workload if a certain percentage is inherently single-threaded, no matter how many cores you throw at the problem you will eventually rearch a point where you are solely limited by how fast the single-threaded portion (critical section) of the code will run, and the returns diminish with each core you throw at the problem. It turns out that people in general are really bad at thinking in a parallel manner anyways, so writing code that actually takes advantage of multiple cores is generally difficult and as a result a lot of applications will leave much of the work on a single thread anyways, so the third and fourth cores of a CPU can go relatively unused in some situations.

In the specific case of the Snapdragon 808 and Snapdragon 810, the differences between the SoCs' CPU blocks are definitely bigger than just a case of lopping off cores from a die. As a result the actual power consumed for a single core at a given frequency isn't guaranteed to be the same. There's definitely overhead involved in wiring up additional cores, so product design has to balance core count with core complexity.

When it comes to smartphones, there’s a sort of hierarchy of needs when it comes to establishing a great user experience. If you follow this down to the base, the foundation that everything rests upon is the hardware. Within the somewhat nebulous area of hardware, there are a number of key drivers for app performance in the hardware. These areas include the SoC and eMMC/NAND. DRAM is also a key factor, but this is often hard to perceive as so much of a modern PC is designed specifically to hide the relatively high latency and low bandwidth of DRAM.

In order to try and get a holistic view of a smartphone, we run a suite of benchmarks ranging from Javascript/HTML5 browser tests to system API performance benchmarks like PCMark to attempt to get a good feel for whether a smartphone will perform well, in conjunction with subjective performance observations from day to day use. 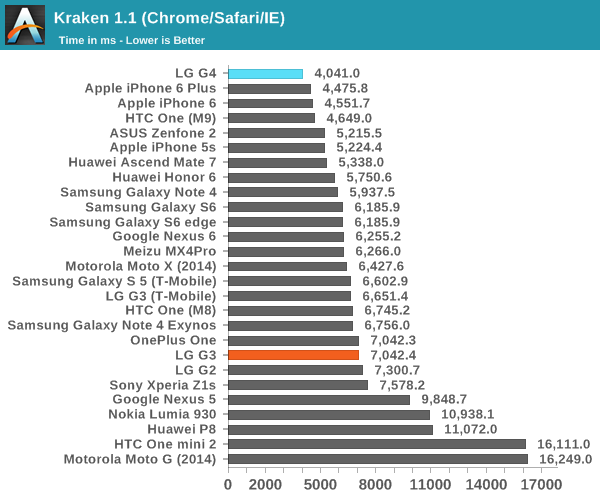 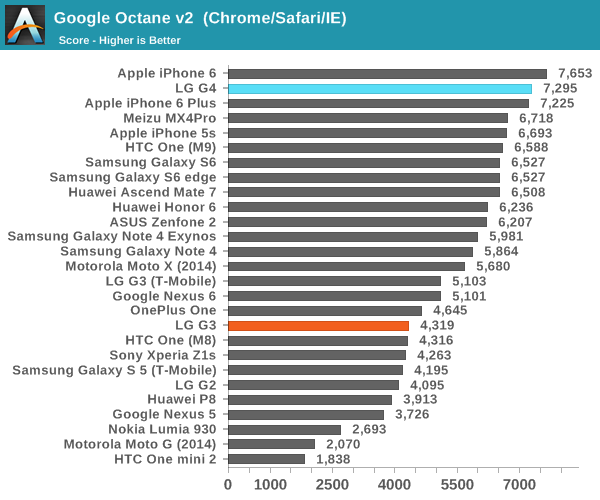 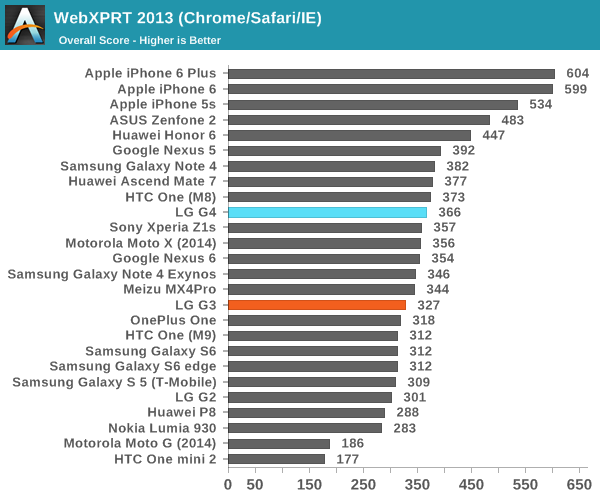 As we can see here, it looks like the combination of the Snapdragon 808 SoC and some work on LG/Qualcomm's part with optimizations for Chrome produces some pretty stunning results in Kraken and Octane. I suspect at least part of this is better optimization at the SoC level for the Cortex A57 in the Snapdragon 808/general software optimization, and at least partly optimizations designed to improve scores in those benchmarks as performance is noticeably more mixed in WebXPRT 2013. At any rate, web browsing performance is consistently good with the G4 and even intensive sites scroll smoothly. 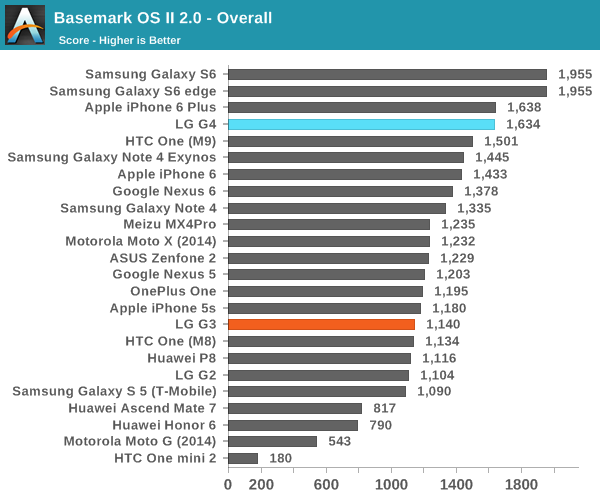 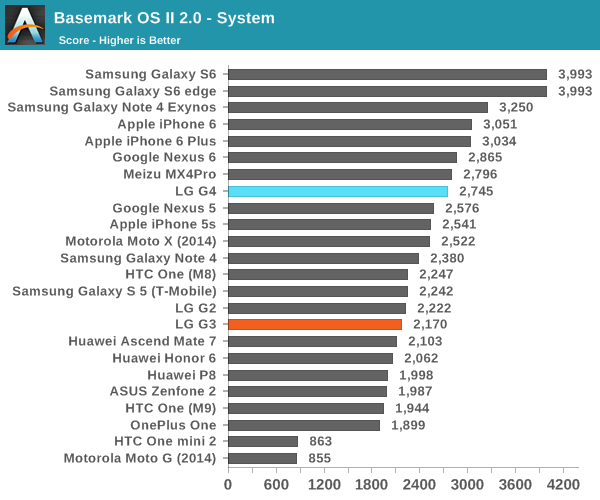 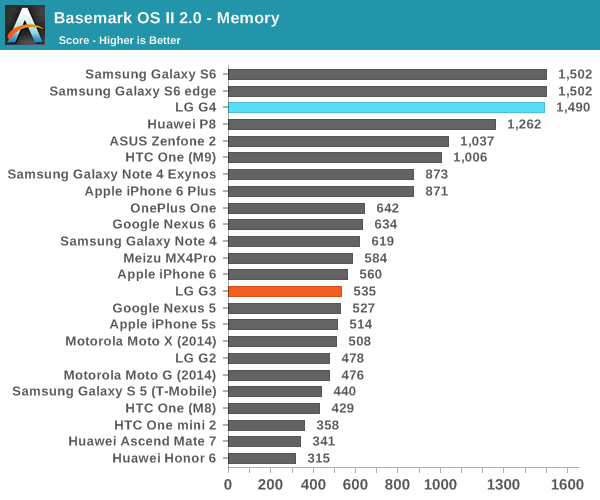 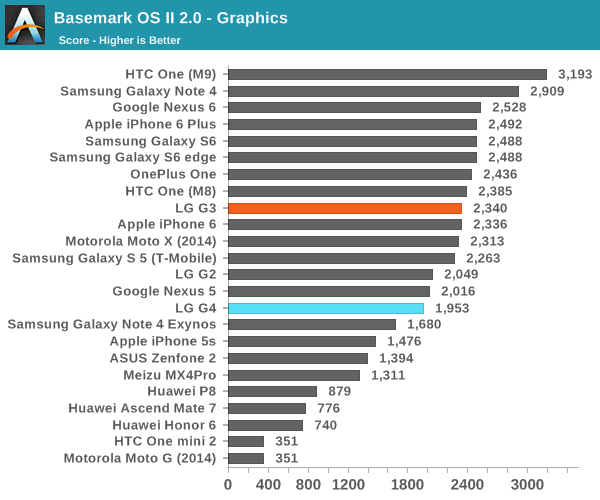 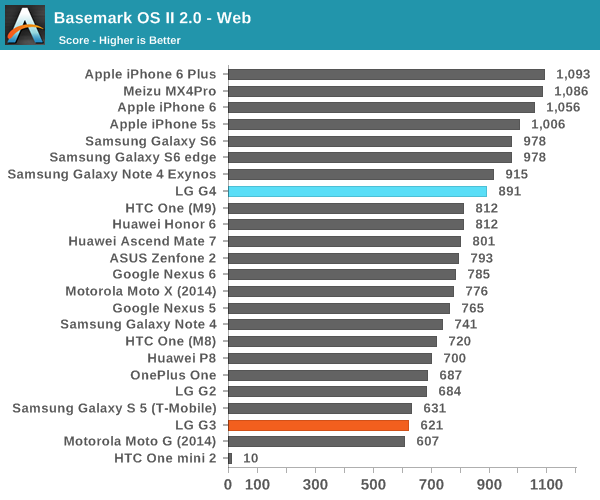 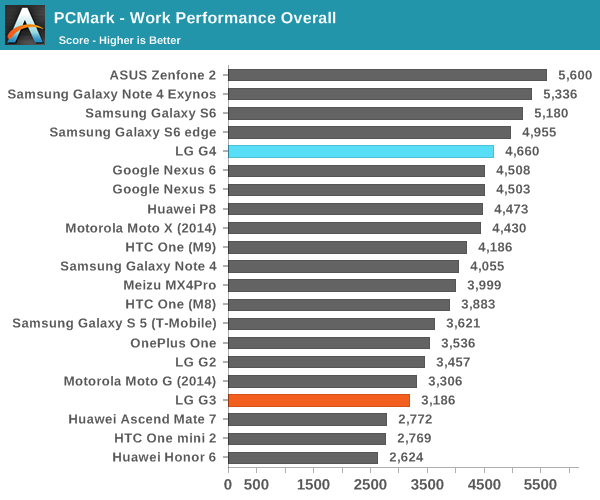 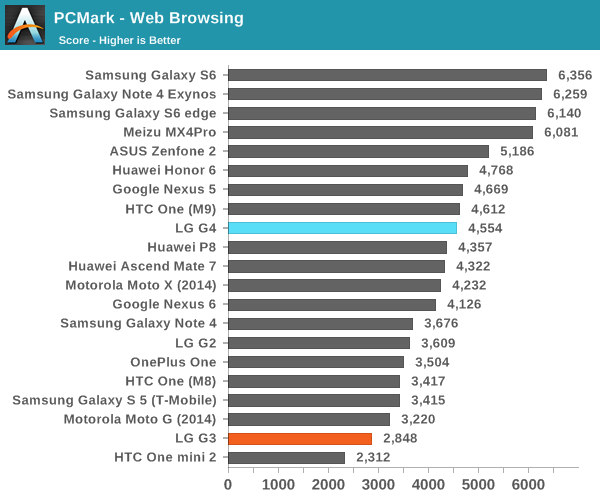 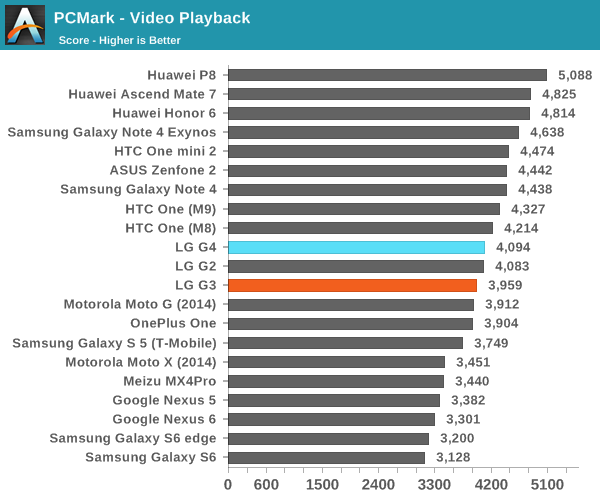 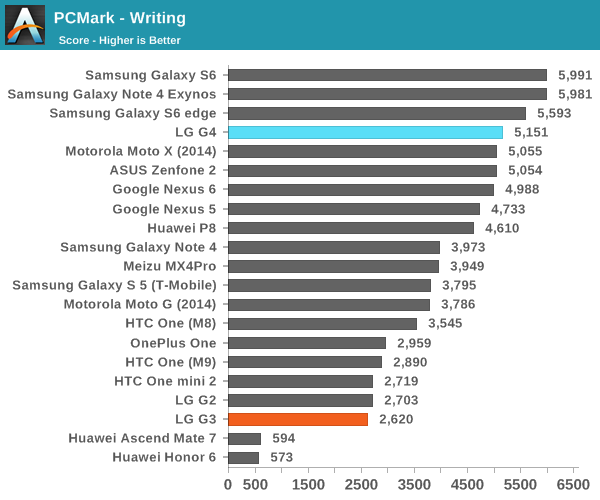 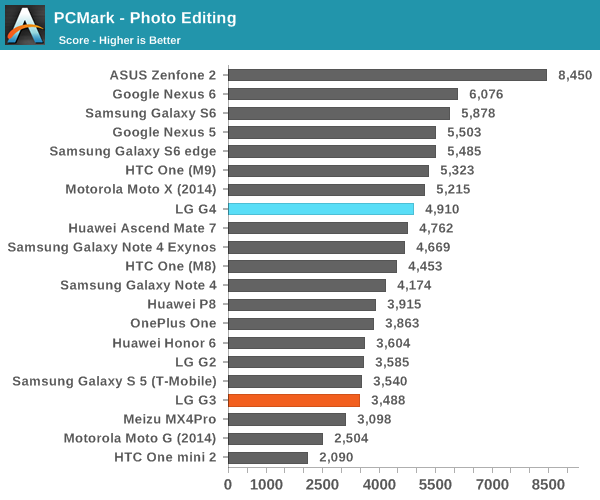 Once again, we see that the G4 performs quite strongly in these general purpose benchmarks, which to some extent affirms that more cores aren't necessarily better, as core count alone really fails to describe significant differences between SoCs. With a combination of the Snapdragon 808 SoC and better software optimization, it seems that LG has made a phone that can perform everyday tasks better than Snapdragon 810 devices, although it still falls short when compared to something like the Galaxy S6.