In and Around the Corsair Obsidian 900D

I'll cut right to the chase, this thing is enormous. It was shipped to me freight, on its own pallet of one, and the FedEx guy bellyached constantly about getting it up to and into my apartment. And it's absolutely huge. Just to give you some idea of the scale, this is the 900D's box hanging out next to the unboxed BitFenix Shinobi XL I use for cooler testing. Please forgive the mediocre cameraphone quality. 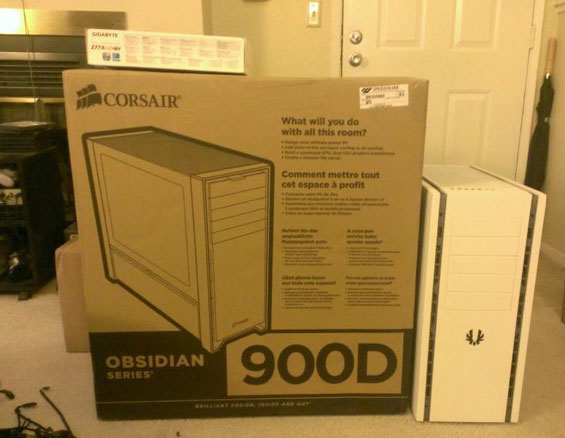 Yeah, they're not screwing around. If you're a particularly tiny man (like, for example, me), know what you're getting into. Thankfully it's only 40 pounds, and I say that knowing that it could be worse.

Corsair uses a combination of aluminum and steel for the chassis that's both attractive and sturdy. The brushed aluminum is on the front fascia of the 900D, and it's very thick and really demonstrates the best qualities of using aluminum for a chassis. The top 5.25" segment of the case is a drop-down door that hides the USB and headphone connectivity along with the reset button; the notch above the door is the power button, and the power and activity LEDs are embedded in it. The shields for the four 5.25" segments below it are secure, but easily removed from the interior, and when removed there's an attractive finish surrounding them (you'll see in assembly later on.) Below all of those is a single panel that pops out to reveal the front fan mounts along with their removable filter. That filter has enough space inside it to comfortably fit around a radiator.

The top of the 900D is much simpler: a large, removable filtered grate bookended by steel on either side.  Corsair has done a good job of producing something dense enough that the fan mounts beneath it aren't unsightly while allowing air to pass through easily enough. Interestingly, there's virtually nothing on the bottom of the 900D. Though the 900D is able to stand a healthy distance off of even a carpeted floor, Corsair elected not to offer cooling options on the bottom of the case. This isn't a mark against the case, just something worth noting. 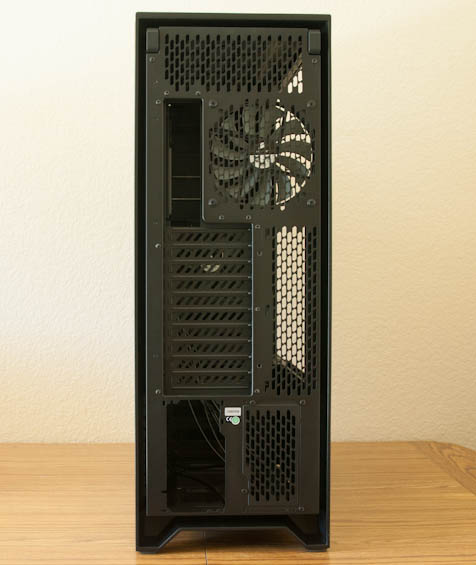 Get to the back of the 900D and you'll see it's almost all ventilation, but the patterns are tasteful and stylish, and it's obvious there's a lot of room behind the motherboard tray for routing cables. You can see the two power supply bays in the bottom, but I think Corsair missed an opportunity by not also allowing the user to install a power supply in the top of the case. The clearance is there, and though it would intrude on the radiator space somewhat, it would also free up radiator space in the bottom. Note that near the top are two wedges on either side; these are buttons that release the latches holding the side panels on, similar to the Obsidian 550D. 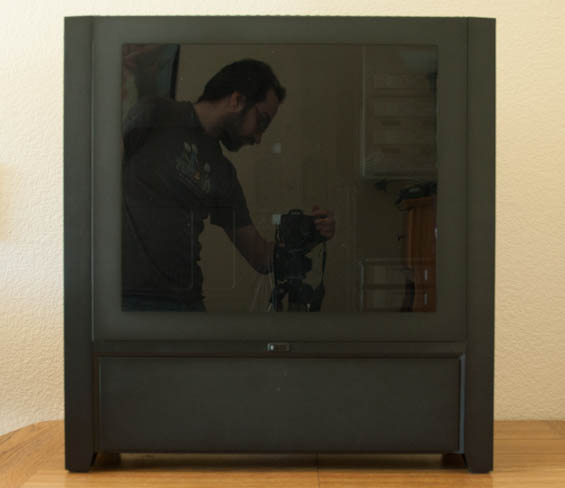 The sides of the 900D are a dual door affair. There are side panels for the top chamber that are hinged at the bottom, and the left panel has a large window. Ordinarily I'm on the fence about windows, but with something like the 900D I think it would be ridiculous not to have one. These hinged panels are easy to remove, secure when in place, and a godsend for builders. Meanwhile, the two bottom doors are also hinged at the bottom, and though they don't come off, they're easily pushed open from behind. In the photography they're blocked off, but they actually have magnetic filters behind them, and the blocked off panels can be removed to turn them into vents if you install radiators and/or fans in the bottom chamber. 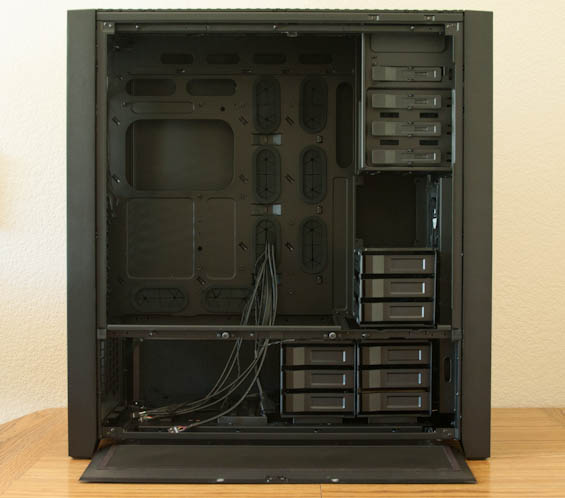 Open up the 900D and Corsair has a heck of a lot going on with effectively a smart two chamber system. The 5.25" bays are toolless (and pretty secure), and the drive cages are all some degree of removable; they're all held in place by screws behind the motherboard tray. Corsair only includes three cages with three trays apiece, but you can order two more directly from them to fill the whole thing out. The bottom right cage also includes a SATA backplane and the trays themselves will line up both 3.5" and 2.5" drives to connect to it. To use the fan/radiator mounts in the bottom chamber you'll have to remove both cages, though; do so, and then there's a panel of mounts that flips up from the bottom. 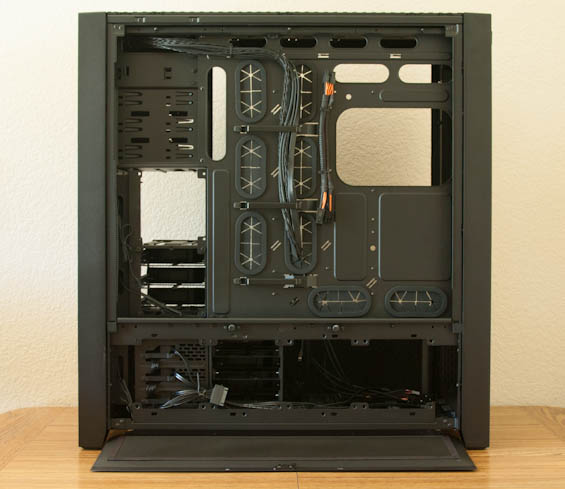 There are plenty of well-placed holes in the motherboard tray for routing cables, and Corsair very smartly sets the one for connecting SATA cables to the motherboard a couple of millimeters out. This corrects for the extra clearance that side-oriented SATA ports require, something few case manufacturers actually account for. Finally, behind the motherboard tray, Corsair actually includes latches for cable routing.

The Corsair 900D is ultimately an exceptionally well built enclosure. It's sturdy and fairly thoughtfully designed for its intended purpose, though not totally flawless. The four fans Corsair includes are all revisions of their popular AF120 and AF140 case fans. As a whole, the package screams quality and I don't get the sense that Corsair ever really cheaped out.