In and Around the Fractal Design Define XL R2

If you're familiar with Fractal Design's aesthetic for the Define series, the Define XL R2 isn't going to bring any surprises. Fractal Design continues to offer their cases in black and gunmetal finishes, and I continue to be pleased with the gunmetal; it's a gray that doesn't clash with computer hardware, but keeps the box from looking too bland. We're really in an age where we've replaced the beige box with the black box. 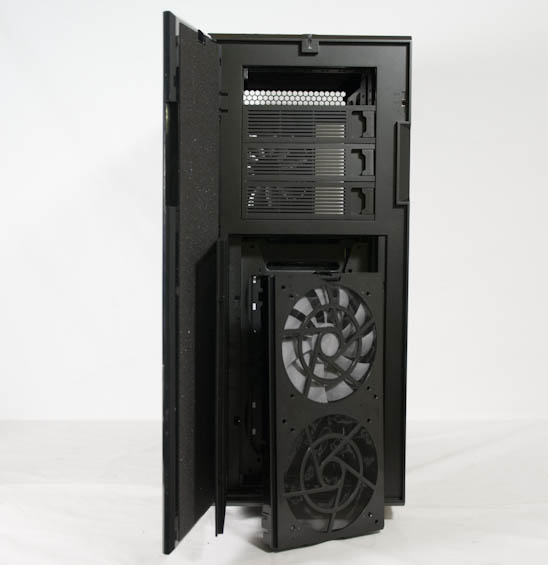 The front of the XL R2 features a padded door which opens to the left and conceals four 5.25" drive bays with ventilated snap-in/snap-out shields. The entire front fascia is ventilated on the sides just like the other Define cases, allowing plenty of cool air to enter the case without letting noise escape. Next to the drive bays is a three-step switch for the fan controller; you can run fans connected to the controller at 5V, 7V, and 12V. Below the bays are two intake fan mounts; Fractal Design includes a 140mm fan in one, but you have to add your own fan to the second. These fans are hidden behind a fan filter and are easily removed and replaced.

When we move to the top of the XL R2, we find the power button and reset button along with the I/O all placed on the front edge of the case. The remainder of the external shell of the XL R2 is flat, matte black, though there are 120mm/140mm fan mounts on the top and side of the case (two on the top, one on the side panel). In true Fractal Design fashion, these mounts are blocked off with removable acoustic padding.

Someone at Fractal Design must have been paying attention to my recent complaining (I'd like to think they were though it probably isn't true), because the side panels are hinged instead of notched. Per usual, two thumbscrews hold them into place, but they're very easy to put on and take off.

The interior of the Define XL R2 is nothing new; this is very much just a larger Define R4. The two drive cages are both modular, and can be removed or rotated to suit your airflow needs. Alternatively, you can mount a single cage where the bottom intake fan is and install a radiator in the front of the enclosure. Fractal Design continues to employ their tried and true white steel drive sleds, and I'm not complaining. I've seen enough vendors nail every other part of the design and then screw these up fantastically that I appreciate when someone has them down about as good as they'll get. 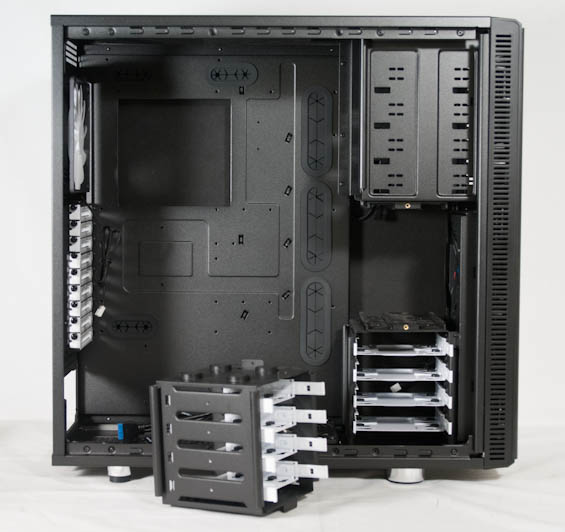 The remainder of the XL R2's interior isn't bad by any stretch of the imagination, but it's still a hair behind the times. We do get a 140mm intake fan on the bottom of the case and the case itself stands up high enough that only the shaggiest of carpet will block it off, and Fractal Design actually includes additional clearance above the motherboard tray expressly for mounting 240mm/280mm slim radiators. Where they fall behind is the lack of an extruded channel around the tray for cable management (as well as helping the case slim down a touch) and no preinstalled motherboard standoffs or alignment studs.

It's tough to complain too much, though. This is effectively the same ATX interior cooling design Nanoxia and everyone else enjoys, it's just bigger. I do think it's unusual that Fractal Design opted to go for a bottom intake instead of using that third fan in the open front mount, but "unusual" doesn't necessarily mean "bad." As I mentioned, the XL R2 does actually stand far enough off of the ground to make this intake a useful one. A bottom intake's noise can be easily muffled by its direction and proximity to the ground.