Closing the Loop: Contained Liquid-Coolers from Corsair and NZXT Compared

As I mentioned in the introduction, despite having six new closed-loop liquid coolers to test, there are only two actual procedures as far as installing the waterblocks; the rest comes from the variations in mounting the fans to the radiators and in turn to the case itself.

NZXT and Corsair both provide detailed, fairly easy to follow instructions for assembly, and they both make the same suggestion that's great for them but potentially impractical for end users: they suggest mounting the fan as an intake in the back of your case, bringing cool outside air directly into the radiator. This is a wonderful idea in theory, but in practice something I've rarely seen implemented. With rare exception, cases are designed to bring cool air in through the bottom and front and exhaust it out of the top and back (where the radiator will go). Assuming you don't have a dedicated video card in your system, this is a great idea, but the instant you start putting components into your case you run the risk of severely mucking up the intended airflow design of the case. For what it's worth, I don't think I've seen any boutique systems in for review that have actually oriented their closed-loop coolers (or even any of their radiators) in this fashion.

As for the installation order, it's going to depend on how roomy your case is: if you're working in cramped quarters, you may want to install the waterblock first and then mount the radiator. If you have room, doing it the other way couldn't hurt. I typically mount the fan to the radiator before installing the radiator itself whenever possible.

Seen above is the Intel mounting system for the Asetek coolers. They employ a backplate that fits smartly around the socket's backplate, and from there installation is handled in one of two ways: the NZXT way, and the right way. NZXT includes a retention ring that plugs into the bottom of the waterblock to keep the piece on the left in place, but this isn't actually how the Asetek waterblocks are designed to be installed. The piece on the left screws into the mounting backplate, but you keep it loose. From there, you insert the waterblock between the notches, then twist it so the block is held in place by the notches. Then you tighten the screws, and it's held securely and evenly into place. Do not use an electric screwdriver; the plastic holding the mounting posts inside the backplate isn't the most durable, and it's very easy to strip it. 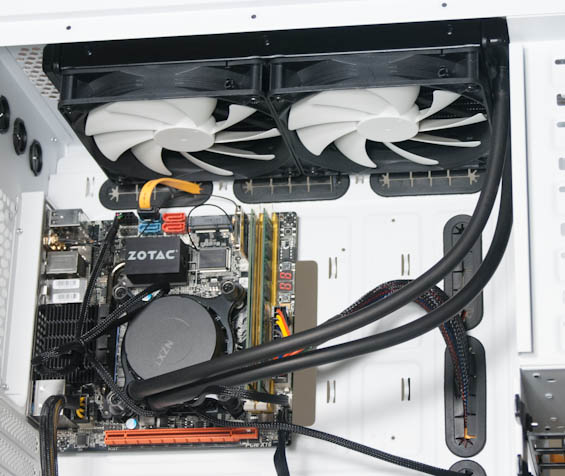 You can see how the block mounts into place in this installation of the NZXT Kraken X60.

Seen above two parts of the mounting system for the CoolIT/Corsair blocks. The piece on the left is a backplate that mounts behind the motherboard, but you have to slide the posts into position and unfortunately you can get an uneven installation due to the backplate potentially pressing against the socket's backplate (and the screws therein). From there, you install retention screws from above the motherboard into the posts. The bracket on the right then goes over the waterblock, and four screw caps then twist onto the retention screws. 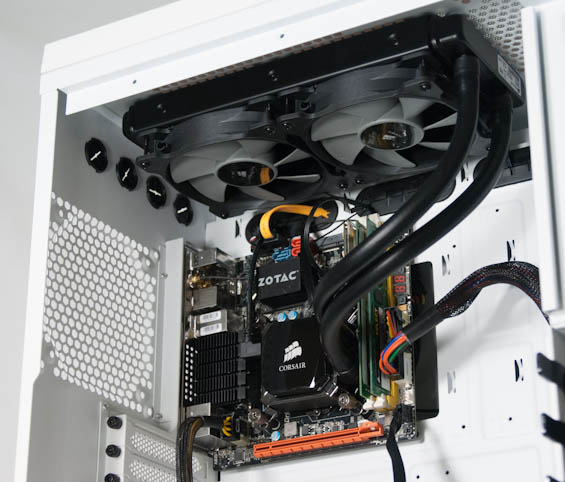 You can get an idea of how it comes together from the image above.

Neither one of these mounting systems are perfect, but I can tell you personally that I do prefer Asetek's solution. The CoolIT one is a bit more prone to an uneven fit, which resulted in my actually doing some retests while testing these systems. Asetek's mount is ultimately simpler, easier to work with, and more likely to evenly press the waterblock against the heatspreader. At least as long as you follow the instructions Corsair/Asetek provide, and not the ones NZXT provides, which include a superfluous retention ring that has the open round piece attach to the waterblock instead of the backplate.