Bridging the Gap, the Dichotomy of Windows RT

I described Windows RT as being a tablet OS with all of the underlying Windows-ness of Windows. You can get the big full screen app experience in tablet mode, but poke around your file system with Explorer or use Office 2013 like you would on a traditional notebook if you want to. If the two sides of Windows RT remained fairly separate that’d be one thing, unfortunately there are some dependencies between the two sides of the OS that keep the overall user experience from being as friendly as it is in iOS. There are still occasional reminders that you’re dealing with something that’s distinctly Windows here.

Most mobile OSes have done their best to hide the underlying file system and shell from the end user. Microsoft did, in my opinion, the smart thing and avoided hiding its roots with Windows RT. Although the new Start Screen is the default UI for Windows RT, there’s a big desktop tile front and center that will take you back to something far more familiar: 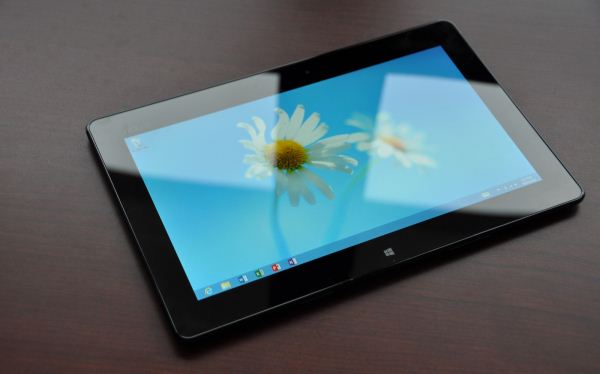 Unlike the Windows 8 desktop, you’re pretty limited in what you can do here. The only applications that are allowed to run in desktop mode under Windows RT are Explorer, IE10, Office 2013 and the command prompt (there are also all of the Windows specific tools and settings which I’ll get to shortly). Developers cannot make applications for Windows RT desktop mode and you can’t sideload anything here. Microsoft’s belief is that by completely locking down the system, requiring that applications only come from the Windows Store, it can avoid the pitfalls of viruses and malware that can plague Windows machines today.

Steve Sinofsky famously quoted an analyst when they asked if Windows RT would be backwards compatible with all of the legacy Windows viruses and spyware. The answer was an astounding no, and this is exactly why we can’t have open season on Windows RT desktop development. There’s also the obvious financial angle to all of this. Microsoft takes a cut of any apps sold through the Windows Store.

Coming from the perspective of a traditional Windows user, the lack of flexibility on the desktop seems wrong. From the perspective of the rest of the ARM  based tablet space, it’s not a big deal. At least Windows RT gives you direct, first party access to the file system. There’s very little exposed through iOS, and with Android you need to download a third party app to get access to the file system.

Explorer works just as it would on a Windows 8 PC. The folder structure is exactly as you would expect it on any Windows machine. There are even some x86 remnants in the Windows RT install such as a C:\Windows\SysWOW64 directory complete with x86 binaries inside that obviously won’t run on your Windows RT tablet. 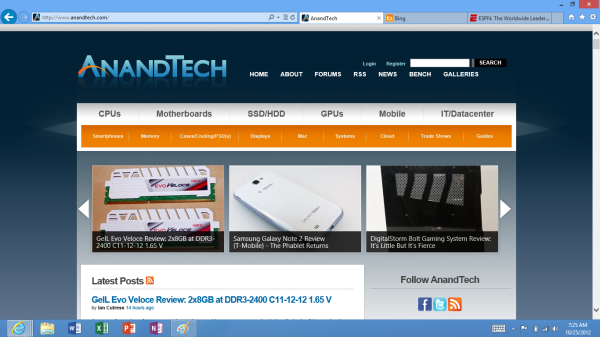 Internet Explorer in desktop mode works just like a traditional IE windows application would work. The desktop app actually controls settings and features for the Metro...err...fancy IE10. For example, if you want to change security settings, clear your history or empty your cache, you have to do all of these things from the IE10 desktop application. Fancy IE10 doesn’t expose them.

The command prompt is, well, a command prompt. It features all of the same commands that you could run before, although once again you can’t simply drop an x86 exe on your system and run it. Not having binary compatibility can be frustrating at times. 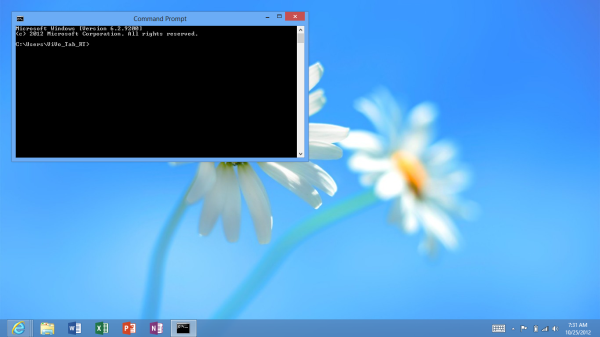 Although developers can’t build applications for Windows RT’s desktop, you can write and execute batch files. Keep in mind that if your batch file needs any additional support files (e.g. sleep.exe) you’ll need ARM versions of them which, unless they come from Microsoft, just isn’t happening.

As I mentioned earlier, there are a few other things you can run and do in RT’s desktop mode. Control Panel, event viewer, disk management and all of the other administrative tools that you’d expect to come with Windows are present in Windows RT (including regedit). There are also the little apps that Microsoft has always included, which also work in desktop mode (e.g. mspaint, calc, notepad, etc...) 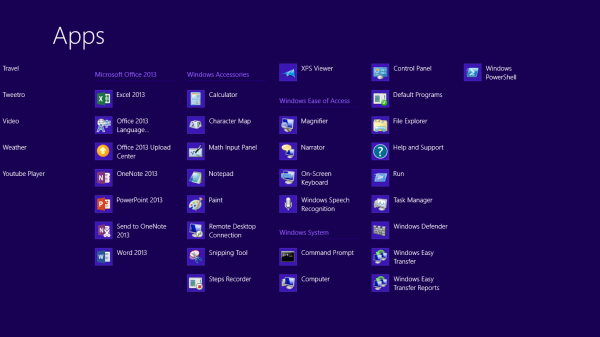 Ultimately Windows RT is an ARM version of Windows with tablet makeup on. You still get all of the normal bits and pieces of Windows, minus some flexibility and of course, backwards compatibility.

For years we’ve been asking Microsoft to make a clean break with its legacy code and introduce a version of Windows that was built from scratch, with only support for the latest hardware. With Windows RT, Microsoft finally delivered some of that, but in a sort of weird, backwards way.

As Windows RT only supports the ARMv7 instruction set architecture, none of your old x86 applications will run on the platform. Microsoft hoped to avoid this being a problem by shipping an ARM version of Office 2013 Home & Student Edition with Windows RT tablets, and by directing users at the Windows Store for the rest of their application needs. Although it would’ve been possible for Microsoft to enable x86 compatibility through emulation or binary translation, performance would’ve likely been pretty bad.

The loss of backwards compatibility with years of Windows applications feels wrong, but from Microsoft's perspective you don't get that with iOS and Android so there's no real competitive disadvantage here. Why bother with an ARM based version of Windows to begin with? To bring competition to Intel and ensure that it will be able to deliver Windows to the new wave of ultra mobile devices (e.g. tablets). Intel hasn't been competitive on power or pricing at the low end (read: Atom) of the spectrum for years now. The introduction of Windows RT changed that. Atom Z2760 (Clovertrail) is around half the price of the cheapest Atom CPU of the past five years, and it's price competitive with solutions from Qualcomm. We have Windows RT to thank for that. Without pressure from ARM, Clovertrail would've started around $50 per chip just like Intel's low end parts had in the past. As AMD is no longer a pricing check for Intel in some of these new markets, Microsoft had to look for a new way to offer balance. Supporting ARM is its way of doing that. Until there's a new pricing/power/performance x86 competitor to Intel in tablets, ARM and Windows RT will remain.