Alienware recently updated their Bronze Editor's Choice award-winning M17x R4 gaming notebook to include Intel's Ivy Bridge processors and optional AMD Radeon HD 7900M series graphics or NVIDIA's new top end GK104-based GeForce GTX 680M GPU. With the move we also get mSATA support inside the chassis. The big draw with our review unit is the NVIDIA GeForce GTX 680M, which promises a substantial performance improvement over last generation's top end GTX 580M/675M, the kind of generational jump we haven't seen on the mobile side in some time.

At the same time, Alienware's M17x R4 remains largely unchanged while Clevo, MSI, and ASUS have all continued to incrementally update their gaming notebook designs. I've also had the privilege of owning my own M17x R3 over the past year and have new insights to offer on what it's like to live with this chassis design after an extended period of time. Is Alienware smart not to mess with what looks like a winning formula, or is the world passing them by? 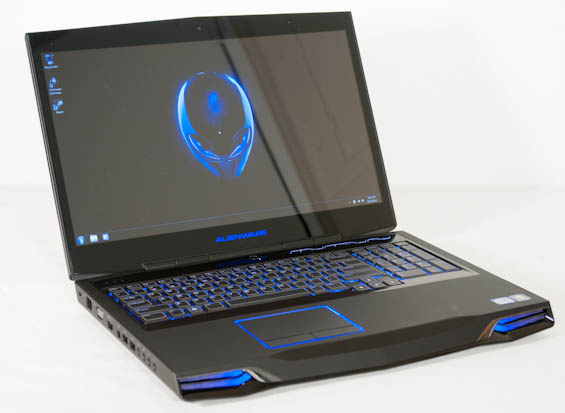 With the M17x R4 I'm going to be a little lazy and refer you back to my review of the M17x R3. Why? Simply put, I can't find any changes between the two chassis designs...at all. Internally Alienware has definitely updated the M17x, but externally this is the exact same notebook and while I was in love with this design before, time hasn't been as kind to it as I'd like.

Typically we get Ivy Bridge systems with the entry-level Intel Core i7-3610QM, but our Alienware systems tend to be a bit better equipped and that's true here. The i7-3720QM is a healthy step up from last generation's i7-2720QM, able to turbo up to an impressive 3.4GHz on all four cores or 3.8GHz on a single core. It also brings with it Intel's HD 4000 integrated graphics, and NVIDIA leverages them with their Optimus technology.

Speaking of NVIDIA technology, the big draw with the M17x R4 is the GeForce GTX 680M. Unlike last generation's GF1x4 derivative GPU, the GTX 680M is based on NVIDIA's current top end silicon. The GK104 in the GTX 680M is the same chip that powers the GTX 680, although here the 1536 CUDA cores have been cut down to 1344. That's about the only cut made, meaning this is basically the same silicon in the very impressive GTX 670, just run at substantially reduced clocks. The core clock now runs at only 719MHz with a boost clock of 758MHz, but the most painful cut is the GDDR5 clock. Where NVIDIA was able to hit a staggering 6GHz on the desktop (and their memory controller allows you to pretty much push the GDDR5 chips to their limits; my GTX 680 is at 6.7GHz on the memory), the GDDR5 on the GTX 680M is running at a paltry 3.6GHz. That means that while generationally shader and texturing power have increased tremendously, the memory bandwidth increase has been much more modest, and that's on a chip that's already throttled largely by memory bandwidth. Interestingly, the GTX 680M in the M17x R4 sports 2GB of GDDR5 while the GTX 680Ms offered by other vendors have 4GB, but this shouldn't be counted against it as even desktop GTX 680s with 4GB of GDDR5 haven't proven to need the extra video memory.

Of course, Alienware offers alternatives to the GTX 680M, which is a hefty $550 upgrade. The default GTX 660M is a glorified desktop GTX 650, built on the Kepler architecture and sporting 384 CUDA cores, a healthy 835MHz core clock, and 4GHz on the GDDR5. That chip really is a fine starting point for gamers, but leave it to AMD to offer what's probably going to wind up being the best price/performance option (just as they tended to last year), the Radeon HD 7970M. That's $200 for an upgrade to a fully enabled Pitcairn GPU that offers a notable improvement in performance over the $250 GTX 675M upgrade, which is just a rebranded GeForce GTX 580M. We have a review of the 7970M in the works right now, but there's really no reason to shell out an extra $50 for worse performance with the GTX 675M unless you absolutely have to stay in NVIDIA's ecosystem and don't want to spend up on the GTX 680M.

Outside of these components, the other gains are largely incremental. Most of the parts are actually identical to the M17x R3 (including the display), while memory speed has gotten a bump to DDR3-1600 and an mSATA port has been added along with Intel's SRT (Smart Response Technology) caching. We get a boost to Bluetooth 4.0 and the audio software/hardware has been bumped to SoundBlaster's Recon3Di. Nothing too exciting here.