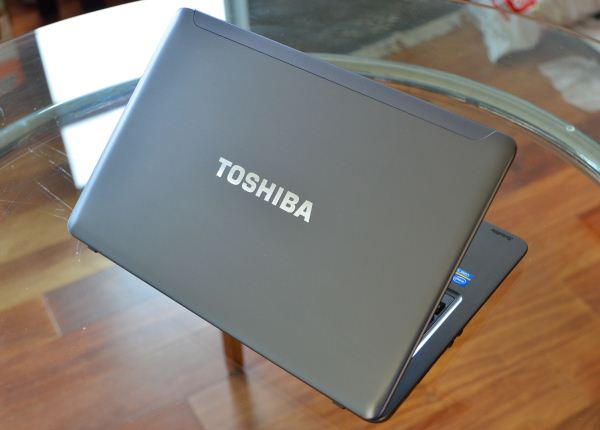 At CES, Toshiba showed us its forthcoming 14” Ultrabook, a system that they said would debut alongside Ivy Bridge in Q3. At the time, it was overshadowed by their new tablets (which hit the market as the Excite series), but true to their word, Toshiba dropped off their new 14” Satellite U845 Ultrabook in our labs and gave us a chance to take a look at it. It’s one of the new “budget” Ultrabooks, which hit the low end of Intel’s Ultrabook spec for around $800, with designs that are still very thin and light but typically not as premium as class headliners like the Samsung Series 9 and ASUS Zenbook Prime. It’s a breed that includes the Samsung Series 5 Ultra, HP’s new Envy 4t and 6t Ultrabooks, the Sony VAIO T13, and Lenovo’s U310/410.

The U845 follows the usual pattern here, with Ivy Bridge ULV processors, a mechanical hard drive paired with an SSD cache, Intel’s onboard graphics, a ho-hum 14” 1366x768 display, and a 3.9lb/0.8” thick form factor. With an MSRP starting price of $749 (our evaluation unit goes for $879), it’s a pretty good representative of the budget Ultrabook market, essentially matching the price and specsheets of the competing Series 5 Ultra and Envy 4t. Of course, that's assuming you have to pay MSRP, and right now the U845 is going for much less than $879: $600 (plus tax) for the i5-3317U equipped version. How's that for a discount?

You get a so-so collection of ports, with HDMI, a single USB 3.0 port, two USB 2.0 ports, and a 10/100 Ethernet jack. At nearly $900 the lack of Gigabit LAN is rather sad; I’d have liked to see Toshiba go with GigE and a second USB3 port. I suppose that it’s not all that common for Ultrabooks to have Ethernet connections anymore, so maybe we should just be thankful for what we were given. As noted above, however, $600 is far more pallatable for such hardware and we're willing to forgive the omissions.

Before we even get to the performance, it's worth a short tangent to note the drastic price cuts seen on Toshiba's entire U845 line—and such cuts aren't limited to Toshiba Ultrabooks. A quick search on Newegg turns up nine Core i5 Ivy Bridge Ultrabooks priced under $800, with the cheapest Lenovo U310 going for $600. Intel had big plans for Ultrabooks when they first hit the scene last year, but they're not selling all that well with pricing closer to $1000. It's not clear if Intel is helping to reduce the pricing by dropping CPU costs or with other incentives, or if the manufacturers are just trying to move inventory, but $600 is a far more realistic starting point. The U845 we have now hits that same mark, so let's see how it performs along with a subjective evaluation.