A couple weeks back, I contacted AMD to let them know I was working on a notebook review—a Clevo P170EM from AVADirect with HD 7970M graphics. Much to my surprise, when I received the notebook I discovered it used AMD’s Dynamic Switchable Graphics, now rebranded as Enduro. It has been just over a year since my last look at the technology, where things were so bad that I felt most users would be better off if they had only discrete AMD GPUs and no switchable graphics—or they could simply buy NVIDIA Optimus enabled laptops. The short story is that my initial experience with the P170EM was largely the same, only the lack of driver updates was even more damning when looking at a notebook sporting such a high-end GPU. What could be done? AMD scheduled a meeting with me to go over the latest updates, and thankfully things aren’t quite so grim as I first thought. 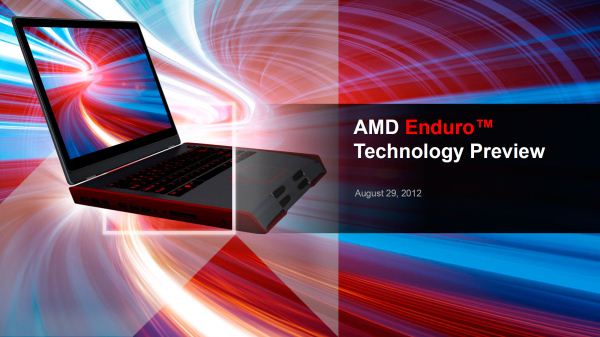 First, let’s get everyone up to speed. Historically speaking, AMD/ATI has been on the forefront of switchable graphics technology. While the first laptop with switchable graphics tested at AnandTech used NVIDIA’s implementation (the ASUS UL80Vt), Radeon-based alternatives also existed in a similar time frame. The main problems with early switchable graphics solutions is that they required extra hardware on the manufacturer side (muxes), increasing cost, and more importantly you were generally locked in to getting graphics driver updates from the laptop OEM. NVIDIA addressed both problems when they launched Optimus in early 2010, and while there were certainly some teething pains the vast majority of users have been pleased with the result. Where did that leave AMD? Simply put: out of most laptops.

Was it because NVIDIA had superior technology, better drivers, or better marketing? I’d say yes to all three, and it has been painful to watch as the number of laptops with discrete GPUs (at least in the US) has largely shifted to being NVIDIA products. Up until now, if you wanted a laptop with a discrete GPU, the ability to switch off that GPU, and you wanted regular driver updates, your only viable option has been NVIDIA equipped laptops. Perhaps that’s why every major OEM (along with most smaller OEMs/ODMs) ships at least some of their laptops with NVIDIA’s Optimus Technology. With laptop sales now outpacing desktop sales, giving up so much ground to their competitor is a serious problem AMD needs to overcome.

I should note that AMD has other products that actually help get around our concerns with Enduro. The Llano and Trinity APUs for example offer integrated GPU that are as fast (faster in some cases) as discrete GPUs. If you’re looking for a good budget laptop that gets excellent battery life and you don’t want to deal with switchable graphics at all, Llano started the trend of providing a decent GPU with acceptable CPU performance and Trinity continues that trend. Even better: driver updates aren’t a problem as there’s only one AMD GPU to contend with. Trinity/Llano didn’t win any awards for pure performance, but in terms of bang for the buck and creating a well-rounded device, the APUs have proven successful. But we’re not going to worry about Trinity/Llano or other APUs; today’s focus is on discrete GPUs and switching between these high-power, high-performance GPUs and low-power, low-performance integrated graphics.

With that out of the way, let’s look at the history of AMD’s switchable graphics as well as where they intend to go in the near future.