I viewed Google I/O, Jelly Bean (Android 4.1) and the first Nexus tablet as Google's last chance to deliver a knockout in the tablet space before the onslaught of Windows 8 and Windows RT devices later this year. While the show was undoubtedly a success, I don't know that the market for $499+ Android tablets has a life after Windows 8/RT hit. We should see Windows RT tablets at $499, and Ivy/Haswell based Windows 8 tablets will handle the higher price points.

It seems that Google also realized this as the Nexus 7, its first Nexus branded tablet, starts at just $199. There's a huge market for tablets as a primary computing device, and I believe Windows RT/8 offers something unique and compelling for that usage model. At the same time however, there's decent demand for a tablet to augment your existing computing world. It's a far more specific usage model but one that really demands a lower price point. Users are willing to spend a lot for something that does everything in your life, but for something that's more nice than necessity, price matters even more. 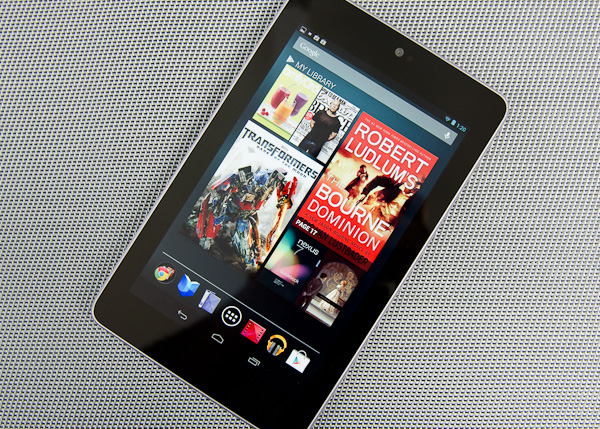 The Nexus 7 is aimed at the latter. It's a device for users who need ultra portability and tons of battery life for content consumption. While Apple has been quietly empowering the iPad to be a content creation device, and dockable Windows 8/RT tablets will attempt to replace your notebook, the Nexus 7 is a more traditional ARM based tablet by default.

It's clearly Google that I have to thank because the Nexus 7 is the most solidly built ASUS tablet I've ever used. That's not to say that its predecessors were examples of shoddy workmanship, it's just that the Nexus 7 is damn near perfect. The back has a great grip to it. The whole thing actually feels like a well made book because of the soft touch plastic back. The book comparison is sort of hilarious because it's a feel that Amazon couldn't get right with its overly generic Kindle Fire. The book illusion stops once your hands touch the glass for obvious reasons, but man does it feel nice to hold. 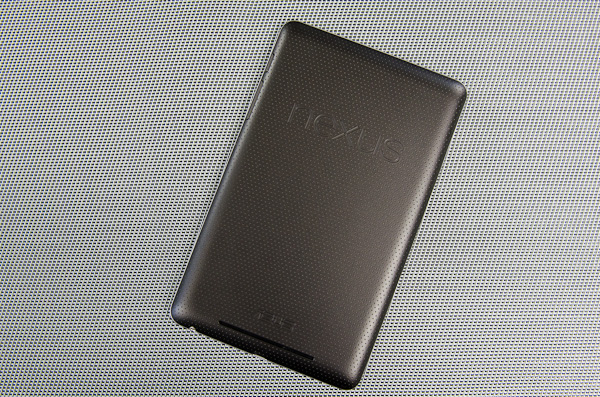 The Nexus 7 feels considerably lighter than the Kindle Fire, but I still had to prop it up on something or hold it in two hands if I was going to use it for a long period of time.

The power button and volume rocker are placed much like they would be on a phone - at the top right edge of the device. The sole buttons on the device do feel a bit ambiguous, something I feel that I would get used to over time. I had the disadvantage of switching between several tablets during this review and never did get used to the position and feel of the buttons on the N7. That's probably the biggest gripe I have about the design of the device. In other words, there's not much to hate.

The Nexus 7 features two mics for noise canceling action (likely in support of Google Now). You get NFC, Bluetooth and 802.11n WiFi but there's no LTE option as of now. I know there's internal debate about releasing an LTE enabled version at some point in the future.

Cost is the major selling point for the Nexus 7: for $199 Google will sell you an 8GB version with a $25 credit at the Google Play store, along with some preloaded magazines, books and a movie (Transformers: Dark of the Moon). It's tough to buy a new tablet and not buy apps for it, so the $25 credit is likely to be incredibly useful - making the effective retail price of the Nexus 7 $174. If you want 16GB of storage the price does go up to $249 however. Unfortunately even Google is not above charging $50 for $4 of MLC NAND.

The limited NAND capacity prevents the Nexus 7 from being home to more than a single full length movie or a couple of TV shows. Streaming video content isn't a problem, Netflix works beautifully on the device but there's no hope if you want to keep a ton of content local. Unfortunately USB OTG isn't supported for storage, so you're left with no other option for expanding local storage (short of rooting the device). 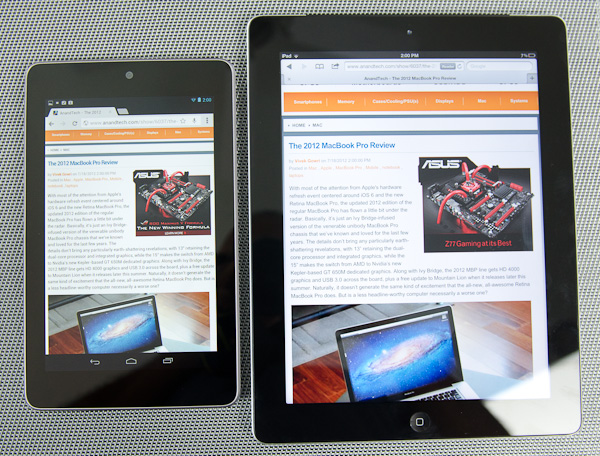 In every sense outside of portability, a 10-inch display is much nicer to look at than a 7-inch one in my opinion. There's less zooming in you need to do on web pages or magazines. Text in general is just easier to read and perhaps I'm getting too old, but there's something nice about everything being comfortably bigger.

Does the Nexus 7's form factor make it feel substantially better than using a smartphone? Yes, I'd say so. The same reasons I gave above for a 10-inch tablet being nicer to use than a 7-inch tablet are equally applicable to 7-inch tablet vs. a smartphone. There's this size/usability optimization curve that requires some soul searching to figure out exactly where you land on it. I suspect most people fall into the small smartphone + large tablet dichotomy, but the beauty of this current mobile revolution is the availability of choice. The Nexus 7 in many ways is very much like the 11-inch MacBook Air. A bit impractical for many, but those who crave portability are drawn to it. The Nexus 7 still feels like you're using a tablet, just a small one.

I needn't dwell on the benefits of a 7-inch form factor for portability any longer. If I'm wearing baggy enough pants I can even pocket the Nexus 7, something I simply couldn't do with the iPad. I'm more likely to carry the Nexus 7 with me than I would the iPad, but the comparison isn't quite as open and shut as that. The iPad offers LTE, the Nexus 7 is more portable, the iPad is easier to look at, the Nexus 7 is more affordable...the back and forth is endless.