First things first, the name. It's the new iPad, or simply the iPad, not the iPad 3, iPad 2S, iPad HD or any other variation on the theme—no more alphanumerics after the product name. Like the car industry, Apple has started peddling its wares by model years. It's a marketing coup for Apple, and their ability to pull it off in the computer industry shows how far they've come in the last five years.

Like the iPhone 4S, the iPad update mostly focuses on a component level, with only minor external changes being made to the hardware. Obviously, the Retina Display is the headline feature here, being the basis of Apple’s marketing campaign for the new iPad. It brings a resolution of 2048x1536 to the iPad’s 9.7” display, boosting pixel density to an impressive 264 dots per square inch. This isn’t quite as concentrated as the iPhone 4/4S Retina Display, which has a density of 326dpi, but because the viewing distance for a tablet is expected to be greater than a phone, effective pixel density is similar. The highest pixel density we’ve seen in a tablet prior to this is 224, with a brace of Android tablets from ASUS, Acer, Huawei, amongst others, boasting 10.1” WUXGA panels. 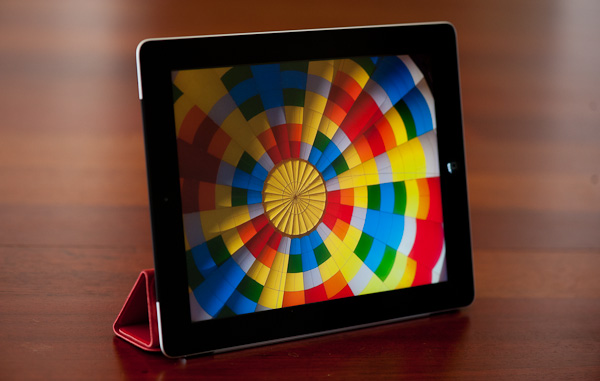 To keep up with the QXGA display, Apple chose to update their A5 SoC to suit the needs of the new device. Called the A5X, the new chip retains the pair of 1GHz ARM Cortex A9 cores from the A5 but features a quad-core replacement for the already potent dual-core PowerVR SGX 543MP2 graphics processor. With the quad-core version, known as the SGX 543MP4, Apple claims that graphics performance has doubled with respect to the SGX 543MP2. Given that SGX 543MP4 is basically the same as SGX 543MP2 except with twice as many execution cores, the claim indicates that Apple kept the GPU clock at 250MHz. SGX 543MP2 was overkill for the iPad 2’s XGA display, but the iPad’s QXGA screen is so vast in terms of pixel count that the more powerful GPU was likely necessary just to drive the display smoothly. In addition to the SoC update, the new iPad got a much-needed bump to 1GB of system RAM. 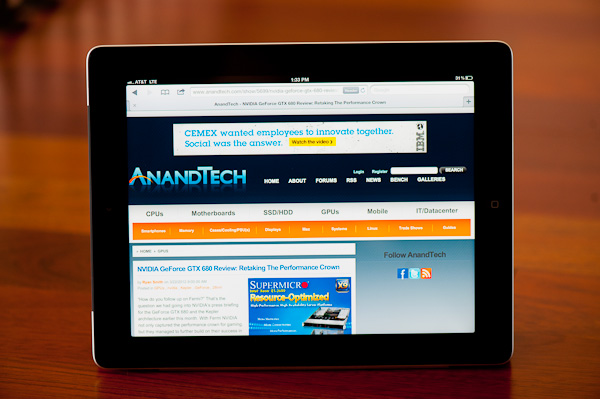 The increase in number of pixels (and transistors powering the display—one for each RGB subpixel) comes with a corresponding increase in the percentage of light being blocked by the transistors and filaments. Thus, the percentage transparent area for each pixel is lower, necessitating a significantly stronger backlight when pixel density is increased. Between the more power-hungry backlight and the faster SoC, the power consumption of the iPad is significantly greater than it was previously. And so, the 25Wh battery was swapped out for a downright huge 42.5Wh Lithium-polymer pack. That’s well into ultrabook territory as far as battery capacity goes—it’s bigger, actually, than the 35Wh battery in the 11” Macbook Air. Apple claims 10 hours of battery life, identical to the previous WiFi model, relatively impressive given the increases in power consumption.

After the Retina Display, the most important new addition to the new iPad is the availability of LTE as an option, replacing the 3G models from before. Available in both AT&T and Verizon flavours, the LTE models both make use of Qualcomm’s 45nm MDM9600 LTE baseband. MDM9600 has support for UE Category 3 LTE, CDMA2000 1x/EVDO Rev.A (and B), GSM/EDGE, and WCDMA/HSPA+ all the way through DC-HSPA+ 42 Mbps, so it can roam internationally on 3G as well as connect to 3G in areas without LTE coverage. Unfortunately, the new iPad’s release schedule meant that it missed the 28nm shipping window by a couple of months, so we will probably have to wait until the 2013 iPad to see the more efficient MDM9615 modem. 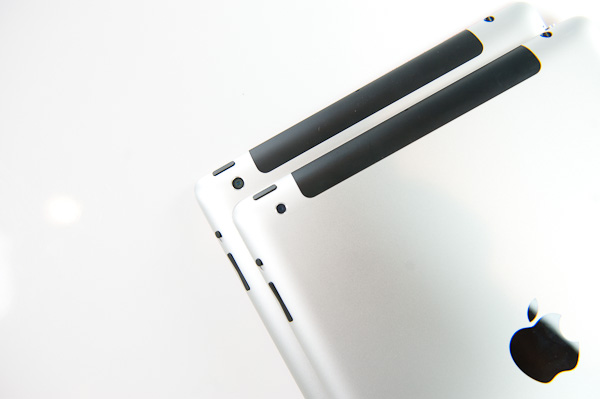 The third major internal upgrade in the new iPad was the camera: in place of the iPad 2’s 720p rear facing camera raided from the iPod touch-parts bin, the iPad gets the huge upgrade to a 5MP camera with a backlit illuminated sensor and an f/2.4 lens. Basically, it uses the iPhone 4 sensor and iPhone 4S optics, so it’s still a parts-bin special, just with significantly better parts.

As before, the iPad is available with either a black or a white bezel, and pricing and storage options have stayed the same. Each step up in storage size costs $100 (so 32GB costs $100, while 64GB goes $200), and the addition of mobile broadband goes for $130. If you do the math and carry the ones properly, you’ll find MSRPs that range from $499 for the basic 16GB WiFi model all the way up to $829 for the 64GB LTE model. I picked up two 16GB WiFi iPads, a white one for me and a black one for a friend, while Anand picked up a black 16GB unit with Verizon LTE.  We rounded out the collection with a black 64GB model on AT&T's LTE network.

New chassis designs involve a lot of effort—between engineering, development, prototyping, tooling, and manufacturing, the entire process requires a lot of time and money. Apple’s design lifespan directly correlates to the maturity of the product line as well as the competitiveness of the market the product is in. With its mobile device lines, the tendency has been to keep a two year design life for established products. As such, the iPad design stays relatively unchanged, with the same design language as the iPad 2. That device had a ground-up design refresh based on the ergonomically-curved design language that debuted with the fourth-generation iPod touch in September 2010. Overall, we were pretty pleased with the form and aesthetics of the iPad 2, so we’re not sorry to see the design stay much the same. 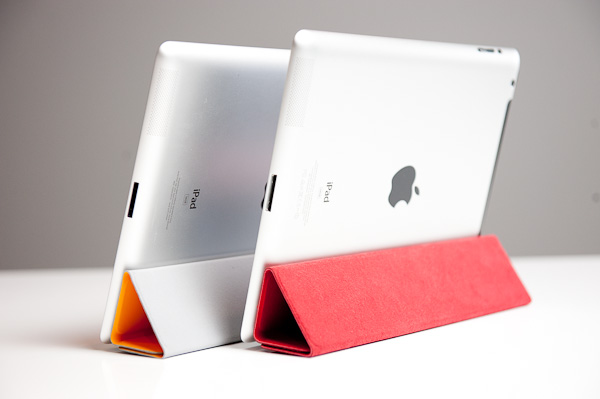 But due to that massive battery, thickness has gone up (by 0.6mm to 9.4mm), and so has weight. At 1.44lbs, the iPad is 0.11lbs heavier than its predecessor (for the WiFi models; the LTE iPad adds 0.12lbs to the outgoing 3G iPad 2’s 1.34lbs). The Retina Display necessitated a faster GPU and a much larger battery to keep performance and battery life similar to the previous level, and you pay for it with a step backwards in terms of form factor. Six-tenths of a millimeter isn’t a lot, but when you consider that the iPad 2 was only 8.8mm thick to begin with, that 0.6mm represents a relatively significant 6.8% increase in thickness. Same goes for the 8.3% weight increase. It’s not a huge deal (after all, we’re talking about fractions of a millimeter and less than 2 ounces of weight), but if you’re familiar with the iPad 2, the additional heft is definitely noticeable. 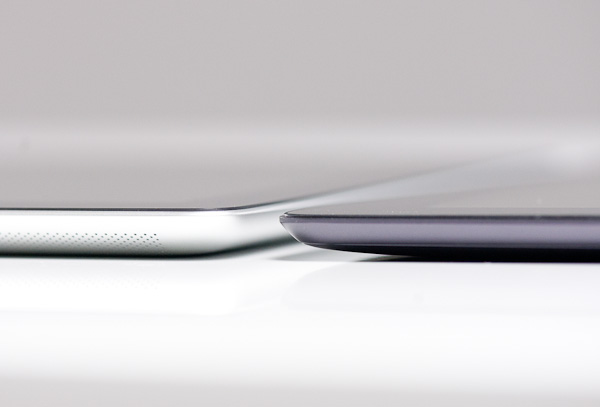 The new iPad (left) vs. the ASUS Transformer Prime (right)

It’s a little bit of an unfortunate development, because the thinner and lighter form factor was what differentiated the iPad 2 from the original iPad and made it so much more comfortable to hold. The 2012 iPad is now closer to the original iPad in weight, though it’s still significantly thinner—and still nearly as thin as the 9.3mm thick iPhone 4 and 4S, which is worth mentioning while we’re at it. It’s still definitely a thin device, just not as much as before.

And I’m not necessarily convinced that it’s a bad thing. The iPad 2, like the fourth generation iPod touch, was at the low end of skinny for me. At some point, a device becomes so thin that it simply is no longer comfortable to hold, and the iPad 2 and iTouch 4 were close to that line for me. The new iPad just backs away from that line slightly, and on a personal level, I think it’s slightly more comfortable to hold. 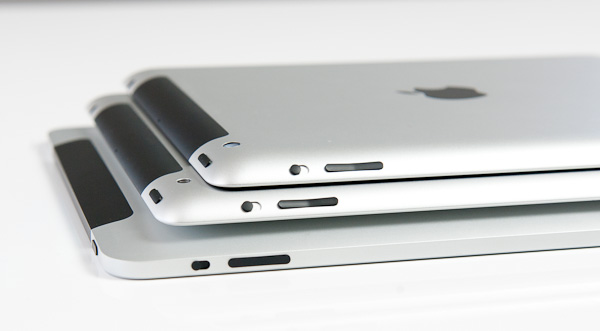 However, the weight gain means that the iPad is once again tiring to hold for very long—carrying it with one hand while reading results in more arm fatigue than the iPad 2. The iPad 2 was a significant improvement over the original in this regard particularly, so it’s a a disappointment to see that become an issue once more.

But taken as a whole, the 2012 iPad hardware is a big step forward. It improves on the two major component issues with the iPad 2—the screen and the camera—without making any major concessions with regards to performance, portability or battery life, as we’ll see. The new iPad is just as usable as its predecessor, it's just better.

Anand and I tag teamed this review. I'm responsible for this section, in addition to the intro, iPhoto, camera and Vivek's impressions sections. The rest is told from Anand's perspective. Hopefully that clears up any confusion as you make it through the review.