Hypothetical situation here: let’s say you bought an iPhone or iPad, but cheaped out and got a 16GB model. You’ve got around 10GB worth of music, a few gigs in photos and applications, and you lose the rest to formatting and the OS itself. Basically, you’re maxed on capacity. Day-to-day, this isn’t a huge issue, but let’s say you’re going on vacation and want to have some movies to watch so that you can avoid the customary in-flight chick flick [or replace with whatever type of movies you dislike]. HD movies aren’t storage friendly, they take a solid chunk of storage space, and you don’t want gut your portable music library for the sake of watching a couple of decent movies on the plane. So what do you do?

Fret not, there is now a solution to that dilemma by way of Kingston and Seagate, among others. Both have recently launched wireless storage devices, streaming your media files to up to three mobile devices via WiFi. Now, both of these are non-ideal solutions to a relatively marginal problem, but that’s to be expected in any newly conceived market. With the shift to cloud-based data and media streaming for mobile devices, there is going to be a gradual de-emphasizing of device storage. We’re already seeing that in a big way with Google’s Cloud OS and Apple’s iCloud service, so wireless storage technologies are going to play an important role in handling media streaming for the future. The two devices we’re looking at today are pricey and aren’t perfect by any means, but they point the way to what the future of local media storage might look like. 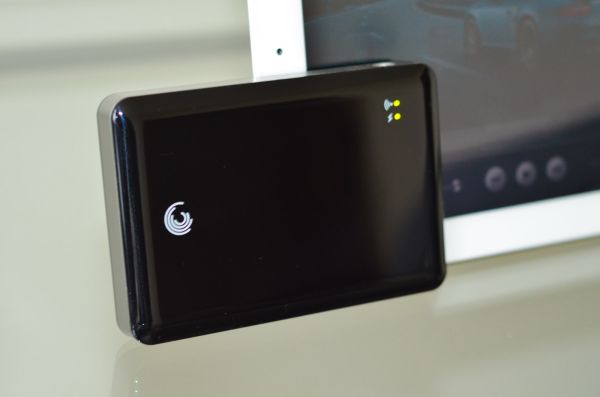 Seagate’s GoFlex Satellite builds off the storage giant’s expertise in hard drives by creating a wireless media streamer based on a portable hard drive. It looks like a larger version of the company’s GoFlex hard drives, albeit with a power switch and an AC adapter input port, and ships in a 500GB configuration with a 5400RPM 2.5" drive inside. Compared to the standard 500GB GoFlex drive, the Satellite is 50% thicker and adds about a half inch to the length and a quarter inch to the width. Interestingly, we noticed a 10mm difference between the listed length dimension and what I measured (130mm versus the 120mm figure quoted in the specsheet). Either way, it’s bigger than the typical 2.5” external drive, but the Satellite shares the same enclosure as the as the 1TB and 1.5TB GoFlex drives, which have thicker hard drives than their lower-capacity brethren.

The additional space goes towards the wireless card, a small web server, and a 2800 mAh battery, definitely a worthwhile trade-off for the minor loss in portability. The main processor is an embedded TI Sitara microprocessor, part of the AM37xx line. It’s the general-purpose computing version of the OMAP 35xx SoCs we got very familiar with on the smartphone side. This particular one is the AM3703, based around a 1GHz ARM Cortex A8 core and the NEON SIMD co-processor. Unlike the OMAP 3s and the higher end AM3s, the AM3703 doesn’t have an image/video/audio accelerator or 2D/3D graphics acceleration onboard. However, since the device doesn’t have a display it doesn’t need graphics acceleration. In addition to the TI MPU, there’s 128MB of Samsung Mobile DDR and a WLAN module made by AzureWave. The AW-NH630 in the GoFlex Satellite is a chip targeted towards mobile devices and PMPs, and supports 802.11b/g/n at 2.4GHz frequencies.

The top of the drive is finished in a shiny piano black, with just a Seagate logo and status LEDs for power and wireless connection interrupting the clean casing. At some point, somebody will realize that piano black shows fingerprints like, well, a piano, and then they’ll start making devices out of matte finish plastic again. Until that day comes, I will continue harping on about devices that double as fingerprint magnets. The main body of the device is made up of a matte silver plastic band, with the power button and AC input on the right and left sides respectively. The bottom is matte black, with FCC stickers and four small rubberized feet, underneath which live the screws holding the entire thing together. The back of the drive has an exposed SATA connection, to which a USB 2.0/3.0 adapter is fitted. It adds another half inch to the length to the entire setup. (If you’re playing along at home, we’re up to 5.28” in total, not including the USB cable itself.) The adapter is interesting in that it can be used to plug any SATA drive into a USB port, which is nice to have if you don’t have any SATA-to-USB bridges floating around. 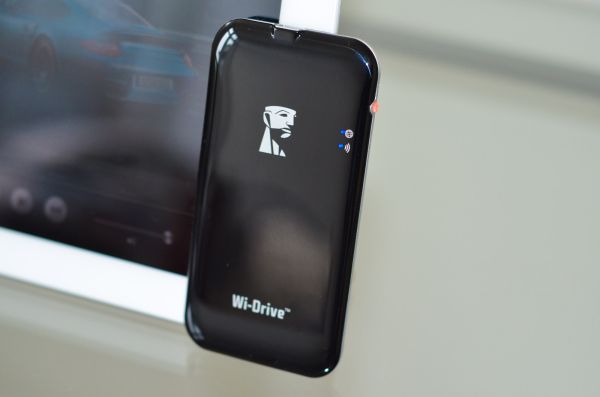 Compared to the Seagate, Kingston’s Wi-Drive looks impossibly svelte. Kingston’s expertise, in contrast to Seagate, lies in memory products. As such, the Wi-Drive is a flash-based wireless storage device offered in 16GB and 32GB flavours. Regardless of how much NAND you spring for, you get a very sleek and stylish package that almost looks like a repurposed iPhone 3G.

I’m serious about that, actually. The organic G2 and G3 curvatures are all there, similar to the previous-generation iPhone body, rendered in the same glossy black plastic with a very familiar looking silver band going around the edge. Set face down, it’s not hard to confuse the two—replace the Apple with the Kingston logo and the iPhone text at the bottom with “Wi-Drive” and you’re basically in the same place. Even the dimensions read similarly: 121.5mm x 61.8mm x 9.8mm for the Wi-Drive, 115.5mm x 62.1mm x 12.3mm for the iPhone 3G/S. It’s actually kind of awesome how well the design language fits with Apple’s last generation devices. (Granted, Apple’s current industrial design represents a clean break from the 3G and 3GS days, but still.)

Both front and back are glossy black plastic and feature curved surfaces, joined by a matte silver band around the center. The band contains the mini-USB port at the top and the tiny green LED power button on the right side. Other than that, there’s an LED wireless status indicator on the front, the FCC sticker on the bottom, and that’s literally all there is to it. It’s about as clean, simple, and elegant as you could make a device like this. My complaint about glossy plastic notwithstanding (seriously guys...come on), I really like the Wi-Drive hardware. It’s basically thin and light enough to be tossed anywhere—jacket, jeans pocket, CD compartment in a backpack, etc.—without any problem at all. It weighs in at a hair under 3 ounces, which is basically nothing. If you want nitpicks, the only one concern I have is with the mini-USB port—a micro-USB port would have been lower profile, so there wouldn’t have needed to be as large of a bump to accommodate it. Also, this is the only handheld device I’ve had come with a mini-USB connection in years, so it was a weird throwback to see anything other than micro-USB. But that’s about the only thing I’d change with the hardware. Well, that and potentially more storage would be useful, as even 32GB may not be enough for certain people.

Internally, we find Realtek’s RTL8188RE single-chip PCI-E WLAN controller, with support for single band wireless connectivity, essentially a bunch of words that says it supports 802.11b/g/n at 2.4GHz. Also on the board is the RTL8196C, a wireless gateway controller with an embedded Lexra 32-bit RISC CPU. Based on the block diagram submitted to the FCC, it looks like the RTL8196C acts as the main microprocessor, with the WLAN chip, NAND modules, and port interfaces all connected to it. Paired together, the RTL8196C and RTL8188RE are a 150Mbps wireless access point/router with a built-in 5-port switch and dynamic power-saving and power-down modes, so idle power consumption should be extremely low when there is no network traffic.

The Kingston’s flash-based storage makes it a significantly more portable choice than the Seagate, but the Seagate has significantly more storage capacity and more versatility when it comes to playback options. While the Kingston is limited to iOS devices at present, Seagate has apps out for both iOS and Android in addition to in-browser streaming to anything that has a WiFi connection. But the real question is this: how well does any of this actually work?