Starting with our application results, we should see some amazing results. We know Sandy Bridge quad-core chips are fast, and the i7-2720QM is a moderate step up from the entry level i7-2630QM. Combine that with Intel’s 510 SSD—even in 120GB form—and you have a very speedy system. The POST time of 7 seconds on the W150HR could be better, but once Windows 7 starts loading it takes all of 15 seconds to hit the desktop (or 10 seconds to resume from hibernate). With NVIDIA’s Optimus, you also have full access to Intel’s Quick Sync technology while still being able to run graphically intensive games.

That last point brings us to an interesting topic. We’ve noted in the past that PCMark 7 appears to use Intel’s Quick Sync for some tests, and it seriously boosts the result in the Creativity and Computation suites. By default, however, NVIDIA’s Optimus Technology recognizes PCMark 7 and runs it on the dGPU, which results in potentially lower performance. To get around this, we ran PCMark 7 in two modes: once on the GT 555M dGPU and once on the HD 3000 IGP. The overall score isn’t affected that much, but you can see how much it helps in the Creativity and Computation suites.

If you’re wondering what exactly is involved in the various PCMark 7 suites, we recommend looking at the whitepaper. The overall workload is generally lightweight, aiming to simulate a “real-world” experience. To that end, the use of an SSD can have a major impact on performance. Dustin and I feel the benchmark skews too heavily toward SSDs, but Anand feels it’s a better representation of the real world—after all, an SSD will usually be a couple of orders of magnitude faster than an HDD. Then again, that’s only in purely random workloads, sustained for a lengthy period of time, which is why I tend to feel an SSD should be more like a ~25% increase in overall “usefulness” for a PC. With that out of the way, here are the results for PCMark 7. I can’t say the benchmark is perfect, but coming up with something that is certifiably better in all ways is very difficult, which is why we use the results along with testing things like x264 encoding performance. 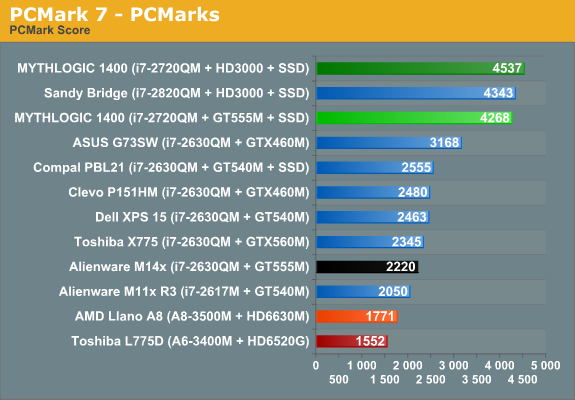 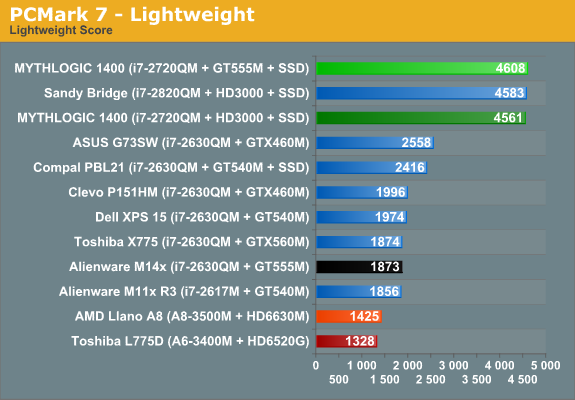 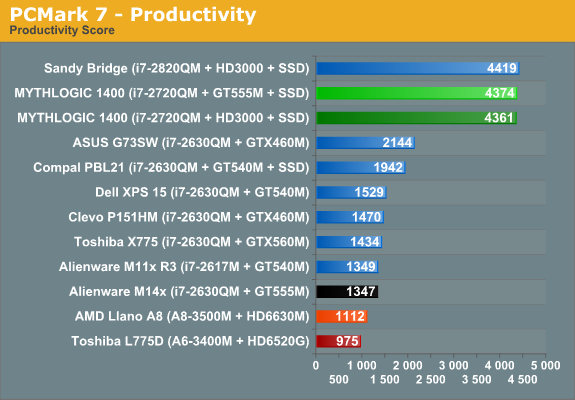 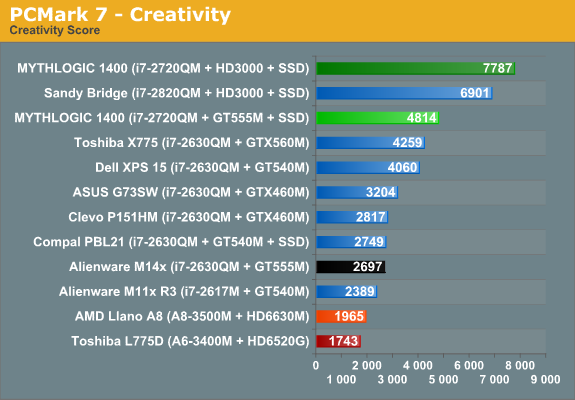 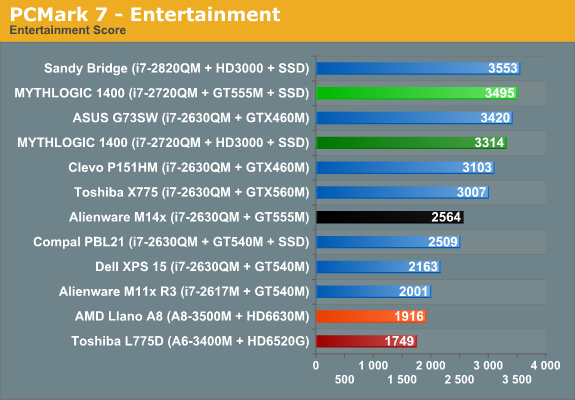 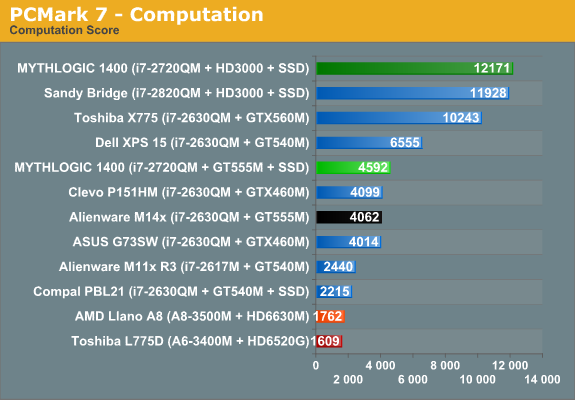 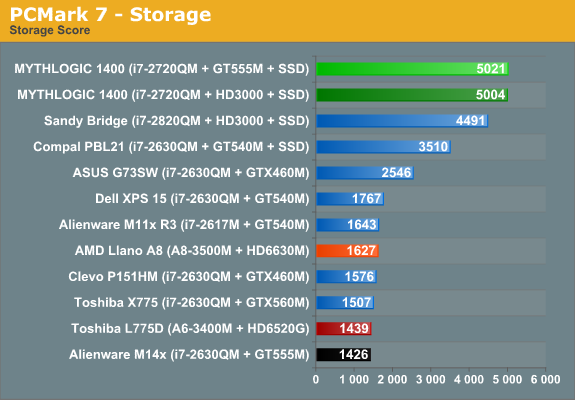 As expected, the MYTHLOGIC Pollux 1400 puts in a great showing. Most of the tests end up slightly faster running on the dGPU, but the Creativity score (which does some video transcoding) is boosted 62% running on the IGP, and the Computation test (which includes video downscaling and a high quality transcode) is 165% faster with the IGP. Those gains might seem unreasonable if you haven’t used Quick Sync; our earlier testing showed that transcoding an HD video with Quick Sync could be done over three times faster than on the CPU, and nearly twice as fast as with a GTX 460M. Throw in an SSD, and nearly every suite shows dramatically improved performance, but that’s because every suite (except for Computation) includes a storage element. As such, the results seen here are absolutely valid, provided you understand what is being tested. If you never transcode videos, the “Computation” suite doesn’t mean much, and if you’re not hitting your HDD/SSD a lot (e.g. just surfing the web), an SSD likely won’t double your pleasure, fun, or anything else. That’s why we again refer you to the PCMark 7 whitepaper.

PCMark Vantage echoes the results of PCMark 7, which is understandable if you look at the PCMark Vantage whitepaper (many of the tests are similar to PCM7 in nature, only without Quick Sync support). The remaining tests focus almost exclusively on the CPU. 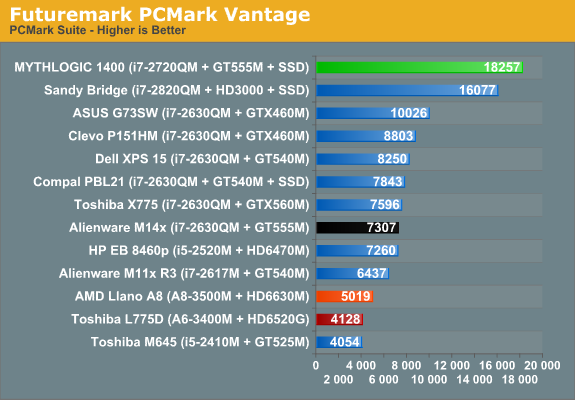 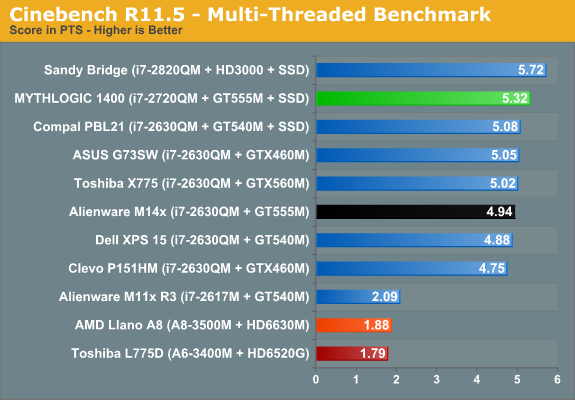 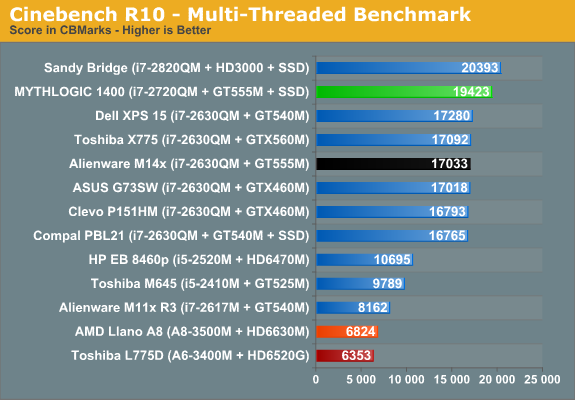 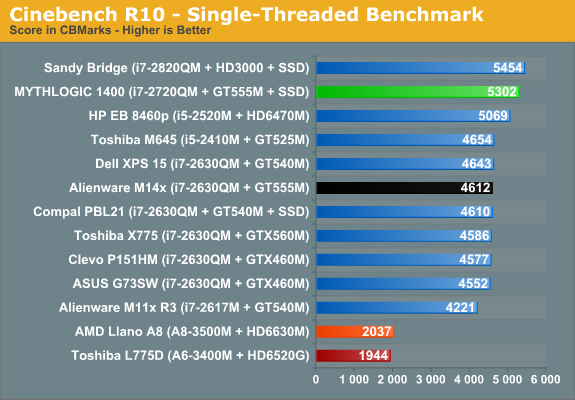 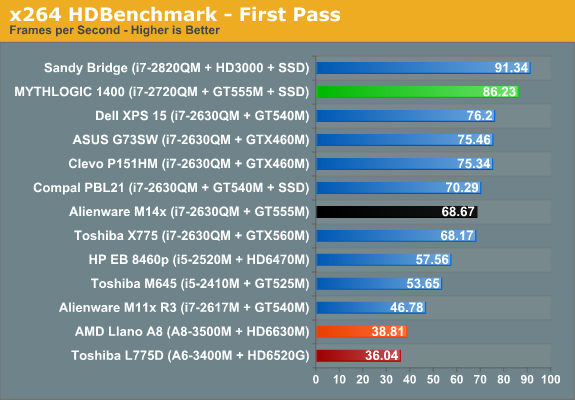 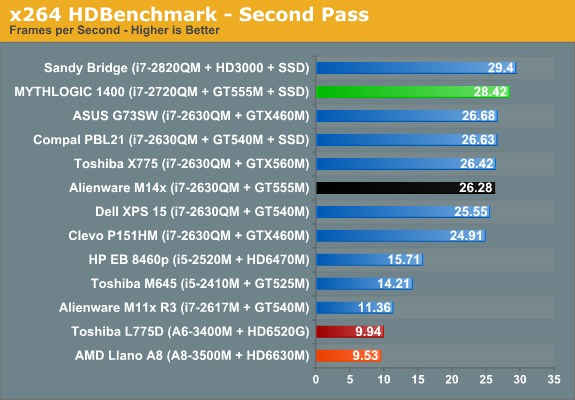 Everything falls out right where it should in our tests: the Pollux 1400 is super fast in PCMark Vantage (thanks to the combination of SSD, CPU, and GPU), and the i7-2720QM is faster than another other mobile CPU we’ve tested, with the exception of the slightly higher clocked i7-2820QM. You can also see how popular the i7-2630QM is with big OEMs; interesting to note is that for smaller companies like MYTHLOGIC, there doesn’t appear to be much of a pricing break on the 2630QM. The upgrade from the 2630QM to the 2620QM costs a scant $25, which seems like a very good deal compared to the $150 extra you’ll pay for that upgrade at Alienware. 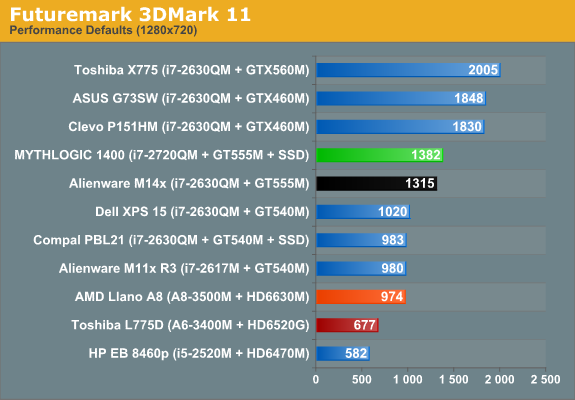 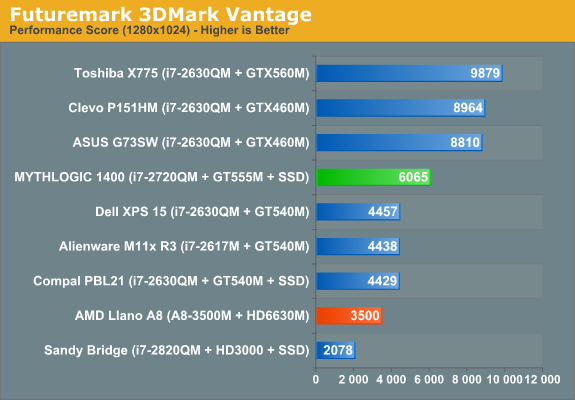 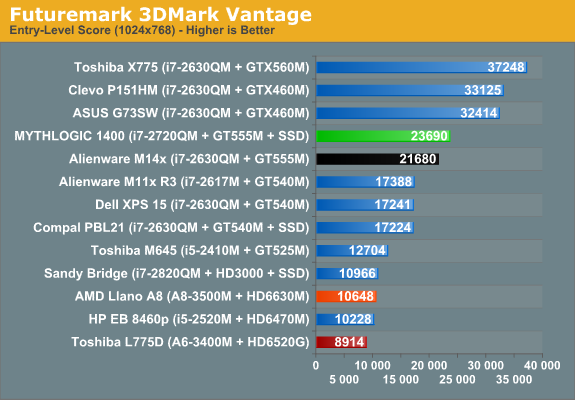 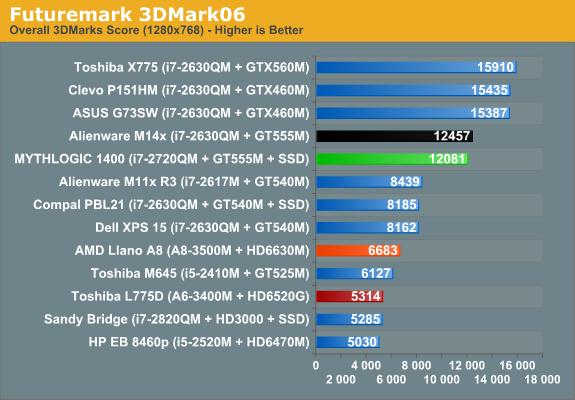 And as one final set of charts before we get to the games, here’s what the various 3DMark suites tell us. The Pollux 1400 actually bests the Alienware M14x in two of the three results where we have M14x scores, which is odd considering the 192-bit interface employed by the GT 555M in the M14x. We’ll have to see if any of that carries over into actual games, as on paper we’d expect the M14x to come out ahead for graphics benchmarks.