Like any notebook with a quad-core Sandy Bridge processor, you can expect the Eurocom Racer to be fast. It also seems to take more than a few design elements from the ASUS G53/G73 “stealth” series, with a matte rubberized coating on most of the surfaces. When you add in a matte 1080p LCD that doesn’t suck—far from it in fact—you end up with most of the major items from my gaming laptop wish list. Here’s what you’re getting, should you choose to take the plunge.

The P150HM chassis has a slight wedge shape reminiscent of the ASUS G73 without having quite so steep an angle to it. It also goes with a more typical hinge instead of moving the display forward (i.e. in the G53/G73 as well as the current Dell XPS line). There will no doubt be those that call this sort of design “boring”, but I prefer to go with functional and not garish. The rubberized plastic coating has a nice feel to it, and I appreciate a notebook that can stand on its laurels rather than on bling. This is easily my favorite Clevo design so far, but that’s not to say it’s without flaws.

There’s no gloss on the exterior or palm rest, and even the stock LCD panel is matte. Of course, that’s all messed up with the use of glossy plastic on the LCD bezel (just where Dustin likes it). I’m not sure if this was done because they feel it works better with the glossy LCDs most companies use or what, but even with glossy panels we strongly feel a matte LCD bezel is best (i.e. look at the Dell XPS line). The slight lip on the LCD cover makes it a bit easier to avoid putting fingerprints there when you open up the laptop, but other than potentially looking nice in photographs glossy plastic has long since passed its prime. 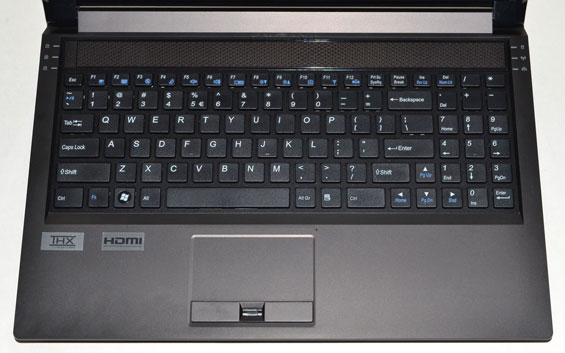 Perhaps the most egregious flaw is the keyboard layout. I’ve gone off on this in the past, but every new Clevo system seems to continue the trend, so let’s be more specific. We’ve still got the all-but-useless number keypad on the right, with the small-sized enter key where the decimal point belongs. Plus and minus are moved up top with the decimal point, which is where numlock, divide, and multiply should be. The zero key is half-sized and overlaps with the right cursor key, and finally there’s an extra row up top where the divide and multiply now sit. It makes the inclusion of the number keypad pointless for any touch 10-key typists.

If you move to the cursor keys, you’ll find that once again there’s no dedicated PgUp/PgDn/Home/End present if you’re using the number keypad. Instead, you have to use Fn+Cursor combinations to those shortcuts, and as someone that uses them all the time I find this highly annoying. The simplest solution for me was to eschew the use of numlock and just use the 10-key for faster access to the other keys; besides, I can input numbers just as fast using the regular number keys as I can with the mangled 10-key area. Given that there’s easily an inch of space Clevo could recover from the left and right of the keyboard area, why they can’t just ditch their tried-and-terrible layout and add put in a proper 10-key layout is beyond me—you know, something similar to what ASUS uses. Even better (though it would be hard to fit in a 15.6” chassis) would be a layout like the Dell Precision M6500. If Eurocom really wants to convince me that they have a customized build rather than a stock Clevo, replacing the keyboard layout would go a long way towards winning me over.

Besides my griping about the keyboard layout, few other areas need addressing. Unfortunately, the touchpad is one such area. It has a good size, it has discrete left and right buttons, and there’s a fingerprint scanner in the middle. It also supports multi-touch and other gestures. The problem isn’t the touchpad itself, so much as the coating. That rubberized paint texture that I like so much elsewhere is also on the touchpad, and here the semi-tacky feel makes it less comfortable to use. A regular plastic texture (or dare I say it, even glossy plastic) would work better.

The rest of the notebook works reasonably well. Two large vents are on the back of the notebook, helping to exhaust heat away from you rather than into your mousing hand. Putting the DVI, HDMI, AC, and eSATA/USB ports back there can make it a bit difficult to access these at times, but if you predominantly use the notebook as a DTR it might make sense. There are two USB 3.0 ports on the left, along with one USB 2.0 port, mini FireWire, a flash memory reader (MMC/SD/MS), gigabit Ethernet, and an optional TV tuner. On the right is the optical drive, four audio jacks (for surround sound, including digital audio out—but you can’t repurpose the ports to do two headphones, sadly), a fifth and final USB port, and the standard Kensington lock.